A female Asian water dragon housed at the Smithsonian’s National Zoo has successfully produced healthy offspring without the assistance of a breeding male.

As researchers led by Kyle Miller , an animal keeper at the Zoo’s Reptile Discovery Center, report in the journal PLoS ONE , the unusual occurrence—officially known as facultative parthenogenesis—marks the first time this behavior has been recorded in both the Physignathus cocincinus species and the reptilian Agamidae family.

In layman’s terms, parthenogenesis refers to female reproduction conducted without any genetic contribution from a male. According to Science Direct , obligate parthenogenesis happens when organisms can only reproduce asexually, while facultative parthenogenesis takes place when species capable of sexual reproduction resort to solo methods. Although the latter variation occurs most commonly among isolated captive specimens, recent research has shown that it is also seen in wild populations.

To date, animals including pythons , bonnethead sharks , Komodo dragons and even birds have been known to practice parthenogenesis. As Heather Bateman , a conservation biologist at Arizona State University who was not involved in the research, tells Smithsonian.com , the reproductive method is common among certain reptile families; in Arizona alone, six out of 12 known whiptail lizard species are parthenogenic.

Speaking with Smithsonian.com , Anuradha Batabyal , a graduate researcher at the Indian Institute of Science’s Centre for Ecological Sciences who was also not involved in the study, says that studying parthenogenesis is key to “ understanding the evolutionary significance of sexual and asexual reproduction and how and why some species have retained both reproductive modes. ”

It’s possible, Batabyal adds, that parthenogenesis could provide a chance for species to thrive in harsh environmental conditions, “as every female has the potential to start a new population.” 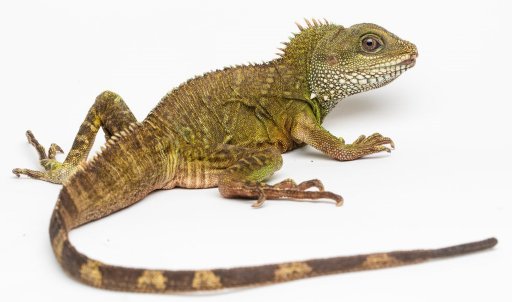 WD-10, the bright green lizard at the center of the study, has resided at the zoo since November 2006, according to a press release . Born at the St. Louis Zoo four months prior to her arrival in Washington, D.C., the specimen was originally expected to act as an animal ambassador rather than a breeding female. But in 2009, the water dragon began producing eggs despite never coming into contact with a male member of her species. These eggs, believed to be unfertilized, were regularly discarded until 2015, when keepers started incubating them for a research project focused on reptile fertility.

Surprisingly, incubation revealed that the lizard’s eggs were actually fertile. According to the study, a clutch of seven eggs laid in November 2015 failed to produce living offspring but yielded two fully developed hatchlings that died in their shells. The next set offered more promising results: Although the majority of the eggs failed to reach the final stages of development, one female was successfully hatched in June 2016. A second healthy hatchling followed in November 2018 but later died of gastrointestinal tract blockage after ingesting a larger object than it could properly digest.

Read the rest of the article here

I agree, for a dragon, she's cute....but not a bit cuddly

My kid has a bearded Dragon named Rex. It took us awhile to figure out Rex is a she. Rex is getting huge and is a surprisingly good pet. The Bearded dragons are known to reproduce on their own as well.

Man! Lizards are weird . Regrowing severed limbs. Babies without sex. But if you really want to be impressed, we have tons of little lizards around our house and you should see all the pushups they can do.