The recrudescence of zero-sum thinking

This, of course, is bollocks.

President Trump believes we live in a zero-sum world in which one country’s gain is another’s loss. This is evident in his reaction to Mario Draghi’s comment this week that additional monetary stimulus will be needed if euro zone inflation doesn’t rise. Trump tweeted :

Mario Draghi just announced more stimulus could come, which immediately dropped the Euro against the Dollar, making it unfairly easier for them to compete against the USA. They have been getting away with this for years, along with China and others.

Adding that this is “very unfair to the United States!” 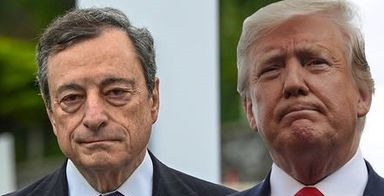 This, of course, is bollocks. The US would actually gain from monetary stimulus to the extent that it strengthens the euro zone economy, thus allowing US firms to sell more to it: exports are more sensitive to demand than they are to exchange rates. What’s more, insofar as expectations of low interest rates cause investors to reach for yield and buy shares they are likely to also buy some US equities thereby giving Americans the benefits of a positive wealth effect and lower cost of capital. Sure enough, the S&P did indeed rise after Draghi’s speech. Trump tweeted that the index hit an all-time high this week, but failed to connect this fact and Draghi’s words.

Yes, Draghi deserves criticism. But it is for not responding soon enough to the weak economy and low inflation rather than for belatedly talking of doing so.

This is not the only example of Trump’s zero-sum “thinking”. He also recently tweeted that:

You don’t need me to tell you that this is also bollocks. It is like me complaining that I lose money by my trading with Lidl. I don’t, of course. I merely exchange goods for money – which is exactly what US citizens with China are doing. Free exchange benefits both buyer and seller. It’s positive sum. In believing otherwise, Trump is expressing the pre-Smithian mercantilist idea, that wealth consists in piling up money by running a trade surplus, rather than in the expansion of consumption opportunities and increased productivity that comes from trade .

Everybody who has even the foggiest notion of economics can see that Trump is spouting mindless drivel: you don’t need to be a devout free-marketeer to see that trade usually benefits both parties.

Which poses the question: how can such nonsense even be entertained?

It’s here that we Marxists are alive to a fact that centrists and rightists sometimes neglect – that ideas have a basis in real material conditions. It is surely no accident that Trumpian zero-sum thinking became accepted among many voters after years of economic stagnation: even after their recent rise, median real household incomes are now only 2.2% above 1999’s levels. If the typical person’s income is flat-lining, he will eventually be willing to believe that one person’s gain is another’s loss. As Ben Friedman argued in a 2006 book which has been vindicated by subsequent events, economic stagnation breeds intolerance.

It’s not sufficient for those who support rational economics and an open society to decry Trump’s gibberish. If they are to triumph, such values require a society which delivers the goods for most voters. Much of the ruling class in both the UK and US neglected this fact before 2016, and we are all paying the price of their failure.

Another thing : this is not to say that there are no zero-sum processes in economics. It's quite possible that the increased wealth, power and incomes of the ultra-rich have come at the expense of everybody else. Despite his fondness for zero-sum thinking, however, Mr Trump never mentions this.

OMG!! I'm seeding an article with the word " recrudescence " in the title!

This is not the only example of Trump’s zero-sum “thinking”. He also recently tweeted that:

You don’t need me to tell you that this is also bollocks. It is like me complaining that I lose money by my trading with Lidl. I don’t, of course. I merely exchange goods for money – which is exactly what US citizens with China are doing.