JUST “HIM AND EPSTEIN” AND “28 GIRLS”: FLORIDA MAN DROPS A DIME ON TRUMP

Donald Trump   now says he’s “not a fan” of   Jeffrey Epstein,   a convenient way to feel about the disgraced financier in the aftermath of his 2008 conviction on soliciting underage girls for prostitution and his indictment Monday on charges of sex trafficking minors. (Epstein has pleaded not guilty.) But that wasn’t always the case. There was a time when Trump could be counted among Epstein’s   rich, well-connected friends . And, according to a   report   in the   New York Times   on Tuesday, the relationship may have been a good deal closer than the president has let on.

Per the   Times , Trump in 1992 directed Florida businessman   George Houraney —who would later   accuse   Trump of sexually harassing his former girlfriend and business partner,   Jill Harth —to organize a members’ only “calendar girl” competition at Mar-a-Lago. After Houraney “arranged to have some contestants fly in,” he told the   Times   in an interview Monday, he discovered that there would be only two attendees. “At the very first party, I said, ‘Who’s coming tonight? I have 28 girls coming.’ It was him and Epstein,” Houraney recalled. “I said, ‘Donald, this is supposed to be a party with V.I.P.s. You’re telling me it’s you and Epstein?’” The anecdote underscores the friendship between the pair, and suggests that their relationship proceeded in spite of warnings about Epstein’s behavior. Houraney “pretty much had to ban Jeff from my events,” he said. “Trump didn’t care about that.”

Like other powerful Epstein associates, the president has sought to downplay their relationship,   telling reporters   on Tuesday that they had a “falling out” about fifteen years ago and haven’t spoken since; “That I can tell you.” But in 2002, Trump spoke differently of his fellow billionaire: “He’s a lot of fun to be with. It is even said that he likes beautiful women as much as I do, and many of them are on the younger side.” The two were friends and ran in similar social circles, attending the same dinner parties, according to the   Times —including one Epstein hosted for Prince Andrew, who has also been accused of sexually abusing minors, though he denies the allegations. Trump and Epstein did eventually have a falling out, though the reason is unclear. The   Times   reported Tuesday that some believe the relationship soured after a business deal between them fell through.

Regardless, Trump took pains to publicize the fact that Epstein had become   persona non grata   at his properties, and may even have considered Epstein’s relationship with   Bill Clinton   as a potential weapon against his future 2016 opponent,   Hillary Clinton.   As my colleague   Emily Jane Fox reported   Tuesday, around the time he was mulling his White House bid in 2015, Trump was discussing with   National Enquirer   owner   David Pecker   how the 42nd president’s association with Epstein could impact Hillary’s nascent candidacy. “[ Michael Cohen ] was sitting in there when I came in, and the issue of the   National Enquirer   with the pictures of   Prince Andrew   was on his desk,” former Trump aide   Sam Nunberg   told Fox. “[Trump] said not to tell anyone, but that Pecker had just been there and had brought the issue with him. Trump said that Pecker had told him that the pictures of Clinton that Epstein had from his island were worse.”

While the White House plays defense—Trump and Epstein haven’t spoken in “over a decade,” adviser   Kellyanne Conway   told   reporters on Tuesday—details continue to trickle out. Trump, who’s been accused of sexual misconduct by multiple women (charges he denies), “routinely intersected [with Epstein] for decades,” the   Times   reported Tuesday, owning to their shared Palm Beach neighborhood and frequent appearances in the tabloids. His labor secretary,   Alexander Acosta,   was instrumental in brokering a cushy plea deal for Epstein. The financier’s downfall has triggered renewed scrutiny both of Trump’s personal conduct and of the fitness of those around him to serve in their administrative roles. And more details could well be forthcoming 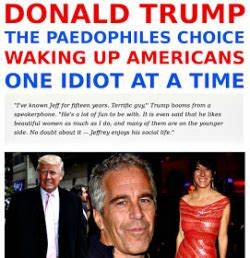 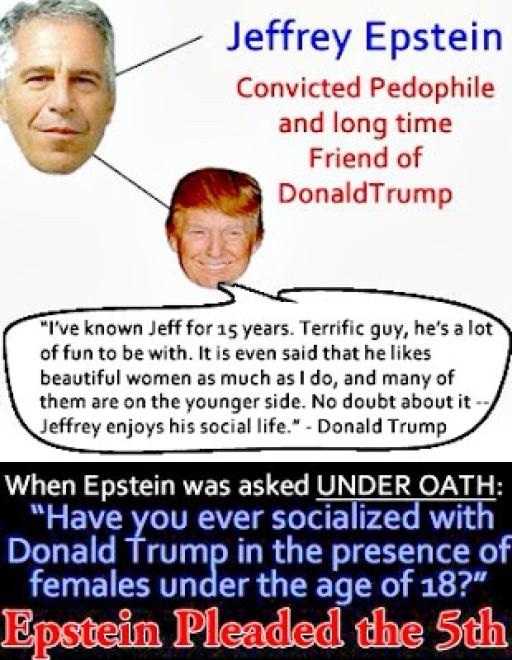 Can you think of one, just one, good reason not to answer, "NO", if it was not so?

Word is it'd be a lot of dimes dropping if he did. Make that, when he does squeal!