Two weeks ago Michael Dunleavy, the Republican governor of Alaska, decided that it would be better to destroy his state’s future than to raise taxes, even a little. The thing is, his actions, while unusually drastic, were basically in line with what other Republican governors have been doing for years. 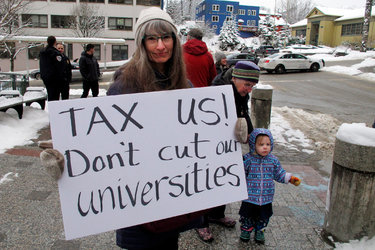 Two weeks ago Michael Dunleavy, the Republican governor of Alaska, decided that it would be better to destroy his state’s future than to raise taxes, even a little. The thing is, his actions, while unusually drastic, were basically in line with what other Republican governors have been doing for years. And they add a twist to what we’ve gradually come to realize is a key story about 21st-century America: the growing divide between thriving and lagging regions.

Luann McVey, who says she is worried about the impact of proposed cuts on the University of Alaska system, holds a sign before the start of a rally.
Becky Bohrer/Associated Press

The background: Thanks to the royalties from North Slope oil production, Alaska has long been in a fiscal position other states could only envy. It has been able not only to afford high public spending, but to do so while levying low taxes and giving every permanent resident an annual dividend. But oil royalties have been declining, creating a fiscal crisis. The state needs to make a choice — raise taxes, cut the oil revenue dividend, or cut spending.

Dunleavy, who campaigned on a (deeply irresponsible) promise to increase the oil revenue dividend, chose spending cuts — but not just any spending cuts. Using his line item veto, he abruptly cut funding for the state university system by 41 percent. Imposing cuts on that scale, with no warning — legislators had agreed to some funding reduction, but Dunleavy’s cut is 20 times what they passed — will have an apocalyptic impact. It’s barely hyperbole to say that rather than accepting the need for a tax increase, Dunleavy chose to destroy public higher education.

It’s an amazing story, but as I suggested, it fits a pattern. When low-tax ideology collides with fiscal reality, education — which accounts for about half of state and local government employment — often bears much of the cost. The infamous Kansas “experiment” in tax-cutting (hey, that’s what Governor Sam Brownback called it) finally came to an end when even Republican legislators were horrified by the damage spending cuts were doing to education.

So what happens when states slash education funding in order to keep taxes low? Obviously it’s bad for students, especially those trying to achieve the American Dream of upward social mobility: Good, affordable education used to be one of our national glories, but in much of America it’s disappearing (but not at the City University of New York!). But it’s also bad for those states’ economic prospects.

Of course, that’s not how the low-tax people see it. In their vision of the world, low taxes are an invitation to business, which is eager to flee high-tax states and relocate to where the rates are lower. But that’s not the dynamic we actually see at work in America right now. What we see instead is a flow of highly educated workers and industries that employ such workers toward places that already offer a well-educated work force, even if they have relatively high taxes.

Even as Brownback was slashing taxes in Kansas, Jerry Brown was raising taxes in California, in part to avoid the savage education cuts taking place in much of the country. Conservatives declared that California was committing “economic suicide,” but the state has in fact boomed on the strength of its knowledge industries.

Now, growing regional disparities reflect powerful economic forces, and lagging regions will have a hard time even with the best of policies. But destroying a key part of your state’s education system to keep taxes low is a good way to guarantee that your state will fall ever further behind.

Using his line item veto, he abruptly cut funding for the state university system by 41 percent.

"In their vision of the world, low taxes are an invitation to business, which is eager to flee high-tax states and relocate to where the rates are lower."

I have added Alaska to my list of states I might consider moving to in the future. Michael Dunleavy appears to represent my views. I hope his constituents feel the same.

Dean... I always admire your capacity for lucid analysis...

As the GI bill following the 2nd WW allowed many vets to pursue a College degree, it was a benefit to our Nation as a whole by fueling one of the largest expansions in our history.

Yes education is the fuel that feeds the economic machine, that is unless one craves an Idiocracy ( we seem to be halfway there).

It looks like the ultra-rich are changing strategies. Until now, they have supported public education. Now they have realized that the public system produces the skills they need... but also lots of diplomas they don't need. So they're starving public education. They will pay directly for what they need.

Just another step on the path to feudalism.

So they're starving public education.

That's just a classic left wing academia talking point that is an absolute lie.   Their little honey hole of tax payer money is being challenged and they don't like it one bit.   Don't blame them really.   Their gig is up.

Utter nonsense.  Rich bitch Betsy DeVos is destroying the thing which she was supposed to support.

Rich bitch Betsy DeVos is destroying the thing which she was supposed to support.

"And in related news, the sky is falling! Story at 11"

Are taxes too low or is spending too high?  That's always the dilemma that governments must tackle.

Alaska and Kansas can't compete with California in the knowledge industry.  Those two states, together, have five House seats.  California controls 53 House seats.  Establishing a knowledge industry will require a lot of Federal support.  Alaska and Kansas can't compete for government contracts, research grants, or development funds; California won't let them compete.  When prosperity depends upon the Federal government taxing and redistributing then California has a significant advantage in controlling government.

Alaska and Kansas have been placed in the position of trying to maintain and grow their state economies without the same sort of support from the Federal government.  That means that Alaska and Kansas are more dependent upon developing natural resources; those states have to actually produce something tangible.  Investing in education won't create a knowledge industry because California is using the Federal government to prevent competition in that sector.

Paul Krugman is trying to argue that increasing taxes would increase the ability to grow and expand a skilled work force.  But a highly educated skilled workforce in small states are at a distinct disadvantage when competing for Federal support.  California is not going to give up its preeminent advantage in the knowledge industry.  Krugman's argument is nothing more than blue sky promises rather than a cold, hard evaluation of reality.  If we follow Dr. Krugman's recipe then Kansas will be in the same economic position as southern and northern California.  Why should that be attractive?