On Pigeon Patrol, Rufus the Hawk Rules the Skies Over Wimbledon

The famed hawk keeps pigeons at bay so the courts and the players can remain … clean.

Roger Federer is serving for the Wimbledon title. He tosses the ball and cranes his neck.

Plop. A gift from a pigeon, right on the forehead.

Luckily, something like that hasn’t happened. At least not yet, not during a big match in recent memory.

For that, Wimbledon can thank a brown and chestnut bird of prey with keen eyes, a four-foot wingspan and bone-crushing talons. His name is Rufus the Hawk, and he plays a crucial role at the world’s oldest tennis tournament.

Every day, in the early morning, well before the matches begin, Rufus soars the skies over the All England Club, on the prowl for pigeons.

Without him, Wimbledon just might descend into aviary chaos. Pigeons could reign supreme, not just in the air, but also in the rafters, on the rooftops and across the grass courts.

The place is perfect for pigeons. “All of the grass seeds, all of the nooks and crannies, and the food waste from the fans,” Wayne Davis, one of Rufus’s handlers, said. Without Rufus, he reckoned, pigeons would number in the hundreds. 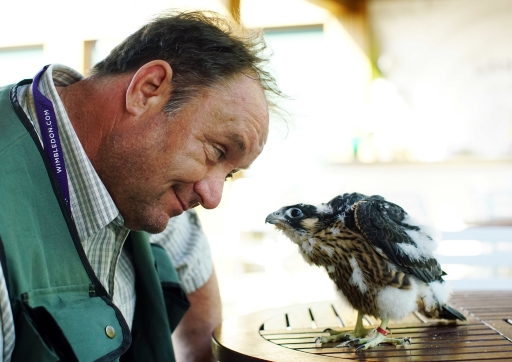 “Feral pigeons breed year round,” he said. “If you have just one pair breeding in the rafters at Centre Court, you would end up by the end of the year with about 40 more birds. You could have Roger Federer serving and clouds of pigeons wafting about.

“And pigeon poop, too, of course.”

Wayne Davis, one of Rufus’s handlers, with a
younger companion of the hawk.
J ane Stockdale for The New York Times

Flocks of pigeons became a growing problem in the late 1990s, a threat to the prim fastidiousness that Wimbledon prizes above all. That was when the All England Club telephoned Davis and his family-run Avian Environmental Consult­ants.

Another of their birds was the first to patrol Wimbledon. Then Rufus the Hawk took over. He has become an English icon.

From dawn to dusk, he soars, on the prowl for pigeons. He doesn’t kill them. He toys with them, barreling from above, twisting, turning, squawking and nipping at their wings, announcing to all that the skies over Wimbledon belong to him.

“The pigeons learned he was in charge,” Davis said. “Other than a few stragglers, they stopped coming around like they did before. He scares them away.”

Rufus would have been a fearsome predator in the wild. Although he weighs just 1 pound 6 ounces, he cuts a much larger figure with his confident bearing and cascade of feathers.

He can spread his talons almost as wide as a person’s hand, and he can see 10 times better than any human. He can focus on a pigeon from a mile way.

Davis and his daughter, Imogen, feed him by hand because his weight is important. At less than a pound and a half, he can become too hungry and might have a pigeon for lunch. Maybe in front of the royal box.

They have taught him to come when they whistle.

Most often, he does. 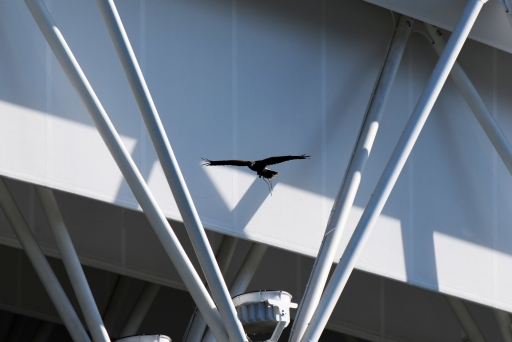 On one occasion three years ago, however, Imogen Davis had to chase him down at a nearby golf course. He took off again, across a road, then out of sight. She followed the jingle of his small bronze bell, attached to a talon.

She found him in the middle of a pond, standing in a thicket of weeds, hovering over a freshly killed duck. She couldn’t let him eat it. A full tummy would mean he wouldn’t come home until he was hungry again.

She waded through muck and lily pads, then through waist-high water. When she trooped back to Wimbledon, past crowds lined up to watch tennis in their finery, she had Rufus in her clutches.

One time, he vanished overnight.

Wayne Davis had left the bird in the family camper, parked outside an apartment they stay at during tournaments. Davis tucked him into the black cage that is his bedroom, and cracked a camper window just enough for ventilation. In the morning, Rufus and his cage were gone.

Someone had broken in and stolen him.

“My heart sank,” Imogen Davis said. She, her parents and her siblings had bought Rufus from a breeder when he was 16 weeks old, and he had become a member of the family.

“It was terrible,” she said. “There were a lot of tears.”

By then, Rufus had celebrity status, even a Twitter handle . The theft of Rufus the Hawk became headline news.

The police said to expect someone to be in touch, demanding a ransom.

Three days went by. Then, from a phone booth, someone telephoned the Royal Society for the Prevention of Cruelty to Animals. No one knows for sure what had transpired — maybe Rufus had gotten away from the birdnappers, or maybe they decided to simply give him up — but he had been spotted in a park. 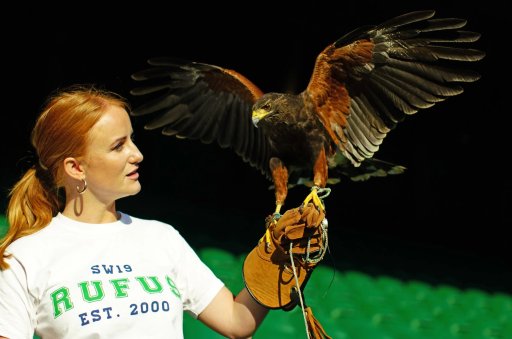 The animal welfare charity picked him up. Rufus went back to work. He hasn’t missed a day since.

Imogen Davis said Rufus has taught her important lessons. Like the morning he flew into the Centre Court rafters and decided to stay there.

Two hours passed. Then five. Then 10. He still wouldn’t budge. “Luckily it wasn’t during the actual tournament,” she said, a nod to the fact that Rufus polices Wimbledon year round. She and her mother, Donna, wrapped themselves in towels and spent the night on Centre Court.

The next day, Rufus came down.

The lesson was a lot like Zen: Rufus never gets ruffled. He does things in his own good time.

Has he ever, in his own good time, decided to perch in the Center Court rafters during a match?

No, Davis said. She chuckled. “But if he did, he would just stay perched up there, saying, ‘I don’t know who Roger Federer is.’”

Initial image: Rufus chases away pigeons at the tournament, but doesn’t eat them, so any spectacle stays on the court.
Jane Stockdale for The New York Times

Hawks poop as well as pigeons. Yes, it could happen.