At least one dead, 10 injured in stabbing at Finnish school complex 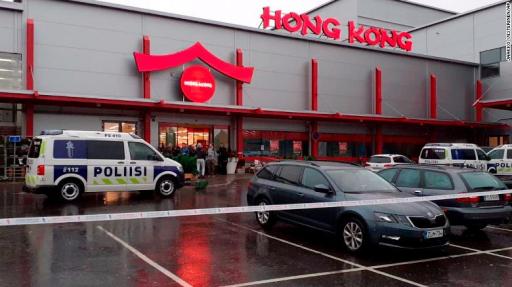 Police attend the scene of a violent incident at the complex in Kuopio, eastern Finland, on October 1.

(CNN) A violent attack at a vocational school in Kuopio, eastern Finland, has left at least one person dead and 10 injured, two seriously, according to police.
A Finnish police spokesman told CNN that a male suspect, who is one of the injured, is in custody after he used a bladed weapon during the "violent incident."
One witness told the  Finnish news agency STT  that a man came onto the college premises, brandished a sword, and began stabbing people with it.

Officers engaged their firearms after being called out to the incident, but would not comment on the possible motive for the attack.

There was another deadly stabbing attack in Finland in 2017:

The 2017 attack took place on 18 August 2017  when 10 people were stabbed in central Turku. Two women were killed in the attack and eight people sustained injuries.

Police were informed at 16:02. Three minutes later the attacker, Abderrahman Bouanane, a Moroccan rejected asylum seeker, had been detained.,

It was the first time anybody had been sentenced for a terrorist crime in Finland.