Fox News: Trump says US troops in Syria to be withdrawn, redeployed in region

Turkey’s invasion has “resulted in the release of many dangerous ISIS detainees,” Esper added in the statement. 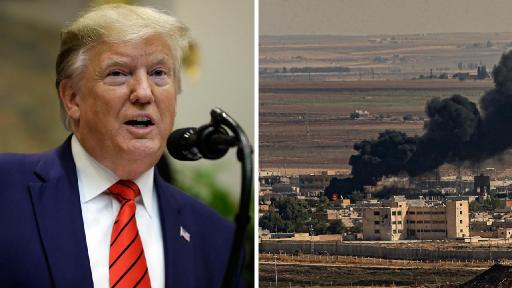 Just when you thought Trump was really going to pull those troops out of the Mid-East ("To end those endless Middle-Eastern wars) -  Fox News Reports:

President Trump  announced on Monday that U.S. troops  in northeastern Syria  will be withdrawn from the country as planned, and redeployed “in the region t o monitor the situation.

It's not clear right now when the roughly 1,000 U.S. troops in Syria will be pulling back. The “small footprint” the president referenced was the At Tanf garrison in southern Syria near Jordan, where troops are expected to remain to guard a supply line used by Iranian-backed forces to move weapons between Tehran and Beirut, as well as Damascus, the officials added.

ISIS traditionally has not had a large presence in that part of Syria.

“Turkey's unilateral action was unnecessary and impulsive. President Erdogan bears full responsibility for its consequences, to include a potential ISIS resurgence, possible war crimes, and a growing humanitarian crisis. The bilateral relationship between our two countries has also been damaged,” Esper said.

Turkey’s invasion has “resulted in the release of many dangerous ISIS detainees,” Esper added in the statement.

“What we're seeing on the ground is absolutely sickening. It’s absolutely shameful that President Trump allowed Turkey to begin killing the Syrian Kurds who were our allies in the fight against ISIS,” Maryland Democratic Sen. Chris Van Hollen said on “Fox News Sunday.”

Asked if Turkey had behaved like a NATO ally, Esper was candid, “The arch of their behavior over the past several years has been terrible. I mean, they are spinning out of the western orbit, if you will,” Esper said.

The situation in Syria following Turkey’s invasion was getting “worse by the hour,” he added.

i was just calling out some on this issue on another article.

I'd really would like one of the forever Trumpers to explain and justify this real Life and DEATH happening NOW,

due DIRECTLY to TrUMPS actions

you're supposed to learn from History, don't you think,

possibly the mental midget at the helm , while out of this realm,

in like the here and now sense,  when possibly,  if say ,   even a few that know better, that

Trump is fgking up royally, and i have a sense, that you, and many others posting excuse after excuse actually realize this time his real lies, is having a Blatent out and out murdering of peoples.

How you can attempt to make it about Obama, is just sad

not admitting that we have a problem president, is even lower, for Somebody's sake, lets venture back to the severity of a small bit of 'ethnic cleansing'

and how you and others posting,

think it can in anyway be ignored.

I'm serious arkpdx, can you reply in good faith in answer to a serious question i pose to you ?

and that goes out to it is ME, Jack Texas, Texas Jack, and Fish, and anybody else that i've disagreed with on THIS specific issue

and htat goes for you other guys that i disagree with, but , don't have the mental energy to actually recall your names    like Sparty and CB, and such  whoever   Loki   Sunshine  etc.

Squiggy, Lenny / what ever happened to Lenny >?

i'd like THIS one explained, as this one IS having Life and Death Consequences, directly from Trumps, doings' / undoings' and don't give me we didn't know this would happen,   remember what the last sane one in the administration upper bracket , resigned about

Was it actually a screw up-- or deliberate on Trump's part?

Kow-towing to his Russian & Turkish masters?

It's looking like Assad is moving troops into the Kurdish region at the request of the Kurds to help defend against the Turks.

How far behind is Russia in support of Assad on this matter?

I am sure Putin has more "vacation ready" military units ready and waiting to invade there.

sorry about lack of context. I was admitting that i thought Obama screwed up in this capacity as well when he attempted withdrawl , but Trump is the one who believes he knows more than the Generals as he plays Army man with real life LIVES.

Why do a picture him, as the dude from Nightcourt playiing CO in the Movie Stripes , running over Army men with his toy tank.

This Fck up is so far out of his league, it's killing people, literally !

Turkey’s invasion has “resulted in the release of many dangerous ISIS detainees,” Esper added

Why didn't this asshat at least take a few weeks to make sure the ISIS prisoners would have some kind of guarding instead of handing them the keys to the gate.