Authorities said Friday they have dealt an unprecedented blow to the violent MS-13 street gang, announcing charges against nearly 100 of the group's members and associates on Long Island. 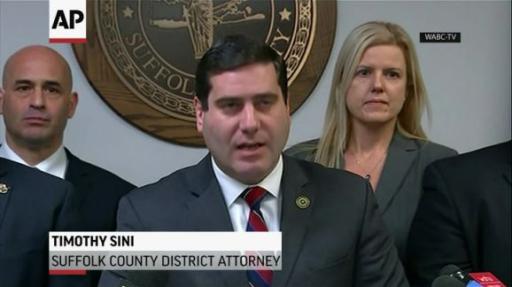 Authorities said Friday they have dealt an unprecedented blow to the violent MS-13 street gang, announcing charges against nearly 100 of the group's members and associates on Long Island.

Suffolk County District Attorney Timothy Sini revealed a sweeping indictment that he said “decimated” the gang's leadership and drug suppliers on Long Island. He described the case as the largest of its kind against MS-13 in New York, where the gang has been blamed for dozens of killings since 2016.

The two-year investigation by state and federal authorities thwarted more than a half-dozen murder plots, Sini said, and also provided authorities insights into the gang's structure and recruiting patterns. The investigation was bolstered by an expansive wire tap in which the authorities monitored calls from more than 200 phone numbers.

Gang members on Long Island conspired with colleagues from as far away as Europe and Oklahoma, collecting cash from drug sales and sending that money to the organization's leaders in El Salvador, according to the 77-count indictment handed up Monday.

The gang feuded against rivals and would even kill its own members who showed signs of disloyalty or failed to perform “required tasks” such as paying dues or trafficking drugs and weapons, the indictment says.

Authorities said they seized more than 10 kilograms of cocaine, hundreds of fentanyl pills, drug ledgers, long guns and other firearms, and more than $200,000 cash. Those taken into custody included the leaders of nine so-called “cliques” — factions of MS-13.

“What you’re hearing from us today is that we’re more committed than every to eradicate this gang,” Sini said. ”Is the battle over? Absolutely not."

Damn, and New York just gave them drivers licenses too.

I wonder if AOC and crew will find a way to blame ICE for this?

Damn, and New York just gave them drivers licenses too

Yes-- ita all part of the Socialists' WAR ON CHRISTMAS!

Sounds like good news. Hopefully they can lock these guys away and catch even more. Unfortunately, the gangs function so well in prison, they're actually run from there.