"I think that Doris Miller is an American hero simply because of what he represents as a young man going beyond the call of what's expected."

Miller, a native of Waco, Texas, received the prestigious award in 1942 after he fired back on Japanese planes with a machine gun on Dec. 7, 1941, at Pearl Harbor. The Navy Cross for valor is the second-highest distinction awarded by the U.S. military for valor.

At the time of the attack, black Americans weren't allowed to man a gun in the Navy.

Doreen Ravenscroft, president of Cultural Arts of Waco and team leader for the Doris Miller Memorial, told the paper, "I think that Doris Miller is an American hero simply because of what he represents as a young man going beyond the call of what's expected."

"Without him really knowing, he actually was a part of the civil rights movement because he changed the thinking in the Navy," she added.

Miller died in 1943 when the ship he was on was attacked by a Japanese submarine during the invasion of the Gilbert Islands.

The USS Miller is a Gerald R. Ford-class aircraft carrier — the new kind of carrier the Navy is hauling out to replace Nimitz-class vessels.

According to the Navy, as of December, 14 ships had been named for African Americans, including destroyers and a ballistic missile submarine.

I was going to save this for tomorrow (Martin Luther King Day) but I thought it belonged more to Sunday.

This is a refreshing story and someone needs a bit more credit:

"According to the Navy, as of December, 14 ships had been named for African Americans, including destroyers and a ballistic missile submarine."

Somebody in the Navy had to have suggested this. It would be nice to know who he/she is. 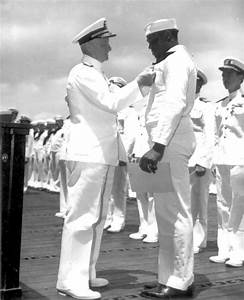 Wasn't he the inspiration for the part Cuba Gooding Jr played in the movie Pearl Harbor?

I think you're right.

Absolutely!  He was serving on the West Virginia the day Pearl Harbor was attacked. I thought the movie was fairly accurate in it's portrayal of Miller.

He was my favorite character in the movie. 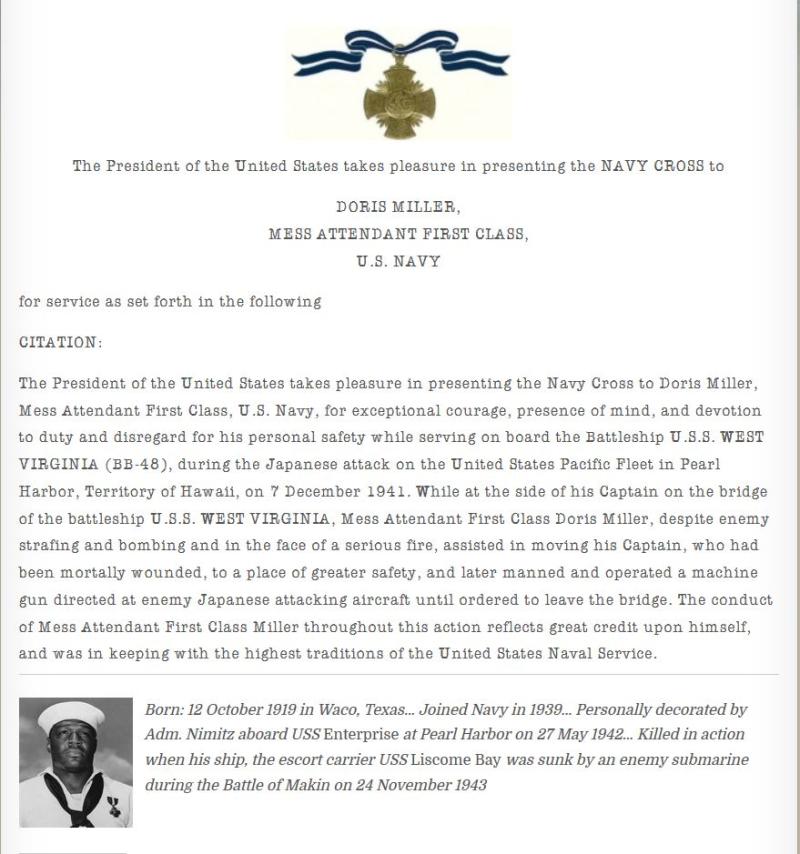 Thanks for the info Vic.

Even better that Doris Miller was from Texas (Waco) and received the award directly from Admiral Nimitz (Fredericksburg) himself yet another Texan.

If anyone is ever in the area, go to the Pacific War Museum and the Nimitz Historic Site in Fredericksburg TX.

I would also suggest while you're there to take a tour of the various vineyards.

I would also suggest while you're there to take a tour of the various vineyards.

Very true.   Texas vineyards have been getting some great press and winning international awards for the wines they produce.  I have to admit that I never imagined Texas as a wine type environment.  Big beef ribs and brisket, but a subtle red or white wine?

Ha. Two years ago, I was surprised by the windmills on the old pump platforms - it was almost funny from the sky. Now vineyards? Yous guys are goin blue.

Just what we needed at this time.

Thank you my friend.