By:   SAM MINTZ, Theodoric Meyer contributed to this report.

After the Sept. 11, 2001 attacks, President George W. Bush signed into law a $15 billion package which lawmakers said at the time it was necessary to help keep several major air carriers from collapsing. 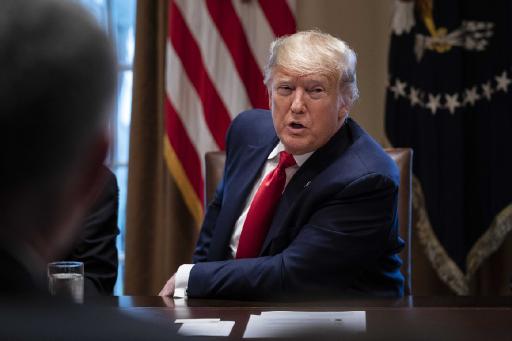 President Donald Trump sought to squelch talk Wednesday about any potential bailout for the airline industry, which has seen flagging ticket sales amid growing fears about the spread of the coronavirus.

So far, the airline industry has yet to publicly indicate it wants such a thing, but there is precedent for it — after the Sept. 11, 2001 attacks, President George W. Bush signed into law a  $15 billion package  which lawmakers said at the time it was necessary to help keep several major air carriers from collapsing. Airlines for America, the trade group for major U.S. airlines, did not response to a request for comment.

The president's remarks came as business leaders Wednesday also sought to downplay the need for any financial assistance for the airline industry. Instead, they called on Americans to stop canceling conferences and plane tickets, projecting confidence in the travel and airline industry's ability to rebound despite depressed sales.

"We don’t need any bailouts here," said Tom Donohue, the president of the U.S. Chamber of Commerce, at a press conference. "There are a lot of regional airlines and others that are critical. If they get in some amount of difficulty, we’d figure out a way to bring assets together to keep them flying. But the bottom line is we’re going to run just like business as usual, with a little higher heartbeat, and get it done."

Those industries, like the economy as a whole, are warning of a slump as the disease spreads across the globe, with a major drop-off expected in international inbound travel and slowing growth domestically.

While no U.S. airlines are at that point now, at least one carrier in the United Kingdom has reached a near-breaking point due to financial conditions exacerbated by the epidemic. The airline, Flybe,   has asked the British government for a 100-million pound loan , according to the BBC. Reuters reported this morning that German airline   Lufthansa has grounded 150 planes .

This will only get worse- - much worse-- as the Virus spreads.

This will only get worse- - much worse-- as the Virus spreads.

It's already spread worldwide because we are essentially a nation without borders.

New cases in the  US will likely peak within the two weeks, then subside.

Corona Virus isn't anything for the airlines compared with what is coming down the road in 2020 when the Patriot Act thing kicks in and only those Americans with 'the special drivers license' will be permitted to fly commercial.   I still wonder what the purpose of that regulation was supposed to accomplish?

Bail out the airlines?  Put that on the credit card too, right?

Corona Virus isn't anything for the airlines compared with what is coming down the road in 2020 when the Patriot Act thing kicks in and only those Americans with 'the special drivers license' will be permitted to fly commercial.

The law requiring Real ID was passed in 2005. 15 years is plenty long enough for states to get compliant--and almost all of them HAVE complied. If a person is living in a state without real ID, there are other options.

This won't really affect airlines very much if at all because almost every state is already compliant.

Since virtually every state has Real ID already, it is no longer considered "special" since it is so prevalent.

The purpose was to have easily identified people flying or entering federal facilities.

Bail out the airlines?  Put that on the credit card too, right?

OMG, you are in agreement with Trump on something? WTF???

'Real ID', huh?  This is 'papers please' and against everything America allegedly stands for.

States compliant with this.  They may be.  But the states don't fly commercial, citizens do.

OK, just to clarify, the only talk of it came from a single reporter. It's not as if Trump is on some kind of campaign to be cruel to the airlines.

It's about duration. Most of the major airlines have operating cash and credit lines to bridge 4~5 months in my estimation. However, when talking airline "industry", one important company is already burning through cash and rushing to the credit market. As for FlyBe, it was way underwater and couldn't find lenders... prior to coronavirus.

Which brings up the number of companies in many industries that are only above or treading water, due to low rates on already over-extended credit. This is the make or break location going forward, imo.

Could the 'bottom line' be that to many companies, airline and others, are to dependent on the 'credit line' because there are to many in the organizations raking to much off the top.  In other words, are there to many executives being over paid for the actual services they provide?

That could be some, but also stock buy backs, dividends, etc. are way more prevalent that what you suggest, imo. It is not unusual for a company to keep a minimum of cash on hand to cover expenses, both current and future... up to a point. If a hiccup occurs, then simply entering the credit market should not be a problem. However, a lot of companies and not just airlines, will be going to that market within the next 3 months, imo.

Cook said one of the lessons learned from China's response to the outbreak was the need "to reduce density and maximize social distance." Since instances of the virus are growing elsewhere in the world, Apple is taking steps to protect its employees and others by shutting its retail doors.

Call me a cynic but ( 3/5/2020 )... Apple reportedly warns stores about replacement iPhone shortage

Expect more and more companies to close down operations to "protect" their workforce and others. I admit is seems pointless and not cost effective to stay open, if you have nothing or very limited supplies to sell. Apple is well positioned, with cash on hand, to withstand an extended shutdown period. There are very few companies in that position, imo. That supply chain disruption is rapidly nearing. Apple is just getting out front of everyone else.

Your statements are true enough.  But I blame Supply Side and Supply Side mentality which has one goal and one goal only and that is to concentrate the wealth into specific sectors and individuals.

Just read where Glossier, Urban Outfitters, Neighborhood Goods and Patagonia are closing til at least 3-28-2020. These are definite supply chain disruptions, although likely spun differently.

Vail is closing down all of its ski resorts and the supply of snow has been abundant this year.

That caught my eye. It is a mixed bag on their 230 retail outlets, with most Asia, but not all just China. Epic Mountain's imports are almost exclusive China.

Not sure how much any of this factored into their decision.