Under the new rules, the definition of sexual harassment is narrowed.

The U.S. Education Department finalized campus sexual assault rules that bolster the rights of the accused, Secretary Betsy DeVos announced on Wednesday. The new policy also reduces legal liabilities for schools and colleges, and narrows the scope of cases schools will be required to investigate.

The change reshapes the way the nation's schools respond to complaints of sexual misconduct. It is meant to replace policies from the Obama administration that DeVos previously revoked, saying they pressured schools to deny the rights of accused students.

"Today we release a final rule that recognizes we can continue to combat sexual misconduct without abandoning our core values of fairness, presumption of innocence and due process," she said. "This empowers survivors with more tools than ever before."

The Obama administration, by contrast, used a wider definition that included a range of conduct that "interferes with or limits" a student's access to the school. It said that could include "unwelcome sexual advances, requests for sexual favors, and other verbal, nonverbal, or physical conduct of a sexual nature."

DeVos' policy adds new measures intended to make sure students accused of sexual misconduct are judged fairly in campus disciplinary hearings. Students on both sides must be given equal access to evidence gathered in the school's investigation and be allowed to bring an adviser, which can be a lawyer, to the proceedings.

Chief among the changes is a policy requiring colleges to allow students on both sides of a case to question one another during live campus hearings. The questioning would be done through representatives to avoid direct confrontation, but opponents have said it's a cruel policy that forces victims to relive the trauma of sexual violence.

Democrats and education groups had asked DeVos to delay any changes until after the coronavirus pandemic, saying colleges don't have time to implement new federal rules while they respond to the crisis.

Opponents quickly condemned the policy and its timing. The National Women's Law Center, a Washington advocacy group, said releasing the rules now "unveils a disturbing set of priorities." The group said it plans to challenge the new policy in court.

"If this rule goes into effect, survivors will be denied their civil rights and will get the message loud and clear that there is no point in reporting assault," said Fatima Goss Graves, the group's president and CEO. "We refuse to go back to the days when rape and harassment in schools were ignored and swept under the rug."

Several of the rules cement changes that advocates of accused students have long been calling for. Parents and lawyers say that, in the past, federal rules encouraged schools to take hasty and unfairly harsh action against any student accused of sexual misconduct.

For colleges, the new policy narrows the type of complaints they will be required to investigate. It orders colleges to pursue cases only if they're reported to certain campus officials, and it says schools can choose whether to handle cases in off-campus areas that are outside their "programs or activities."

The Obama administration encouraged schools to handle complaints that arose beyond their borders, and it required them to address any misconduct that the school "knows or reasonably should know" about.

Under the new rules, the Education Department will also use a different standard to determine if schools responded appropriately to a student's complaint. Colleges will be held accountable, the rule says, if it's found that they acted with "deliberate indifference" toward the allegation.

DeVos' rules effectively tell the nation's schools how to apply the 1972 federal law known as Title IX, which bars discrimination based on sex in education. It applies to colleges and universities, along with primary and secondary schools.

For years, schools relied on a series of letters issued by the Obama administration telling them how to respond to complaints. Missteps could bring federal investigations, with penalties as high as a total loss of federal funding.

Advocacy groups for victims say the Obama rules forced schools to stop sweeping the issue under the rug, while those supporting accused students said it tipped the scales in favor of accusers. Some colleges complained that the rules were too complex and could be overly burdensome.

DeVos proposed her new policy in 2018 and opened it for public comment. The proposal drew more than 120,000 comments, more than any other proposal in the department's history.

Now if you had any credibility in wanting to have an honest discussion you would remove the comment @ 2 since it has nothing to do with the article or the discussion.  But I doubt you will, cuz you wouldn't want to piss off someone that supports your opinion in all things.

Now if you had any credibility in wanting to have an honest discussion you would remove the comment @ 2 since it has nothing to do with the article or the discussion.  But I doubt you will, cuz you wouldn't want to piss off someone that supports your opinion in all things.

Wow. You made that real personal real fast.

If YOU had any interest in an honest discussion, YOU would have commented on the article instead of worrying about what someone else posted.

What is considered on topic is all over the board, and since I didn't declare what he posted as off topic in the beginning, it is allowed--whether you personally like it or not.

So, if YOU want "an honest discussion"--START ONE!

What do YOU think of the new rules, and why?

You do not want to have an honest discussion.  You want an echo chamber and the comment below and your refusal to delete it shows that.

You do not want to have an honest discussion.  You want an echo chamber and the comment below and your refusal to delete it shows that.

I asked you a specific question about the article, and all you can answer with is some whining about a post that offends you somehow?

That is disingenuous. Stop feigning interest when all you really want to do is whine about somethign or someone.

You know how you GOT to this article, right?

You can leave it the same way!

If you have anything to say, please keep it on topic--since you seem so concerned about it.

Thought so.  No interest in honesty or integrity or credibility.

For all of your immense whining, I STILL have given you a chance to discuss the article and you STILL want to whine about something else.

I don't need that incessant whining on my article. Please leave or get ON TOPIC.

No interest in honesty or integrity or credibility.

I certainly do, I just can't find anything even resembling that in your whiny-ass posts.

I heard they will be using capcha 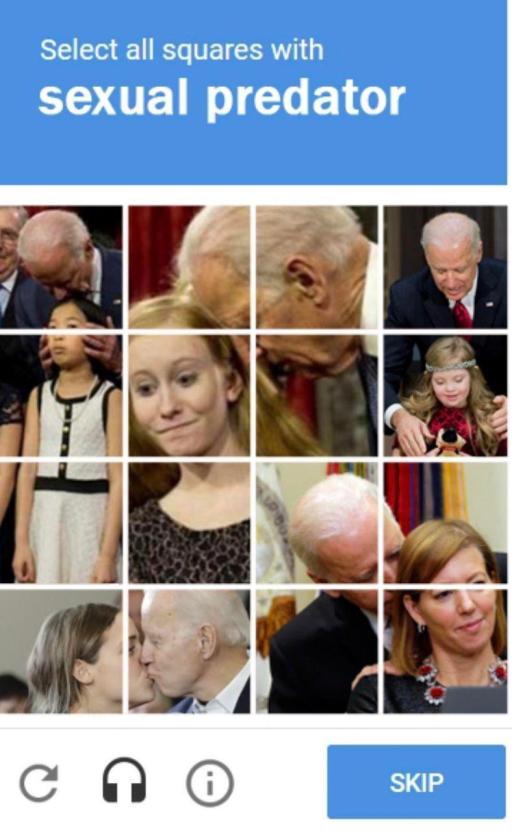 Man, did you get somebody all twisted up!

Oh well, just another day on the internet. Save that meme, it is amazing, it's coming out every time we talk about sexual assault.

The female incel, aka feminists who paraded around in pussy hats are total hypocrites.

Seems right to me.

But, man, are some people going to get their panties twisted all up over it!

Well, it certainly looks like everyone got some common sense--FINALLY.

No one upset over this--which is a very good thing.

They are such hard cases because so often it’s the word of one person against another. We want to punish the guilty, it we also don’t want to ruin the life of someone who doesn’t deserve it.

Joe Biden, mater of hypocrisy, naturally oppses. Per the Biden rules, when the defendant of a sexual assualt allegation isn't named Biden, they don't deserve due process. They are guilty until proven innocent.