President Trump gets his lowest marks for handling the pandemic since it began.

As COVID-19 cases rise across the country, Americans offer some of their most dire views on the pandemic to date: record numbers say efforts against the outbreak are going badly (including new highs saying efforts are going very badly); President Trump receives his lowest marks for handling the pandemic since it began; and the outlook for the summer is grim. Twice as many expect the outbreak to worsen, rather than improve.

In the South, more people now say things are going badly than did a month ago, and there's rising concern there about catching the virus. More Southerners are also saying their state opened too quickly, rather than at the right pace. 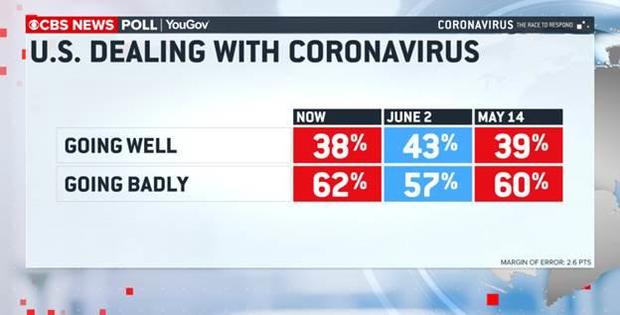 The president's rating on his handling of the outbreak is its most negative to date. The portion of Americans who say he is doing a good job has fallen to its lowest level, and the percentage saying he's doing a bad job is at its highest. 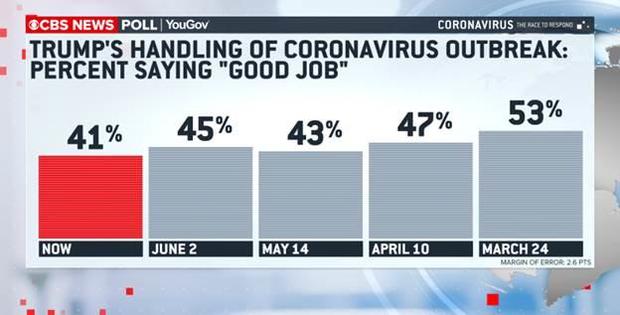 Masks have indeed taken on a political tinge, as expressed both in party breaks and in relation to the broader public. Republicans are less likely to wear one and call the decision a "personal choice," while a majority of people overall describe the decision to wear a mask decision a "public health responsibility." Democrats and independents are more apt to take the latter view. 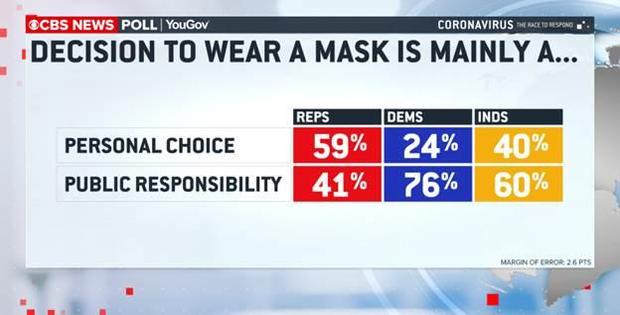 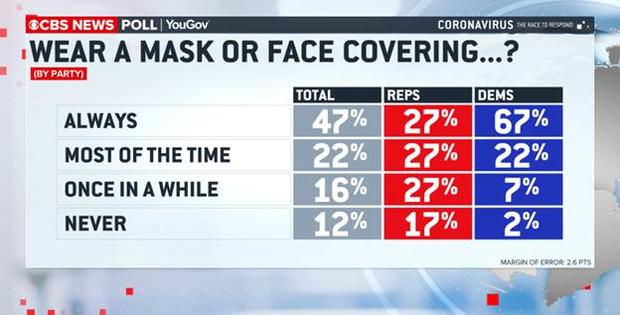 Gender plays a role here, too, as women report wearing masks more often than men do. 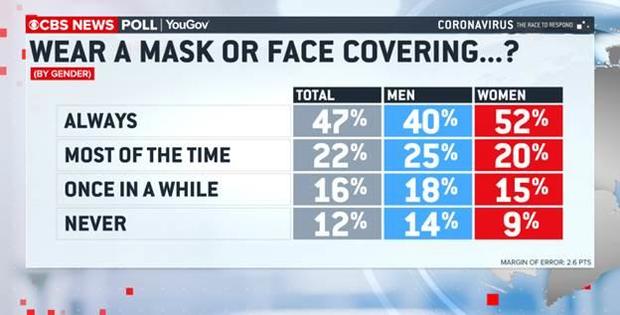 More generally, Republicans still tend to paint a very different picture of the pandemic: for most, U.S. efforts are going at least somewhat well, and the president is doing a good job. They tend to say their own risk is minimal, and that nationwide testing is less important to containment. Personal experience plays a role here, too: Democrats are more likely than Republicans to report knowing someone who's gotten the virus or to say that their communities are being affected.

And so, while Americans see the containment effort overall as a public health issue, half also concede they see it as a political one, as well — most Republicans, even more so than Democrats and independents, say they think of the matter in political terms. 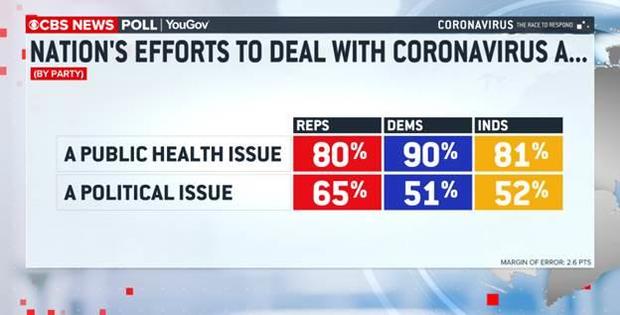 More than 8in 10 Americans feel widespread testing is important to containing the virus, including 6 in 10 who call it very important. 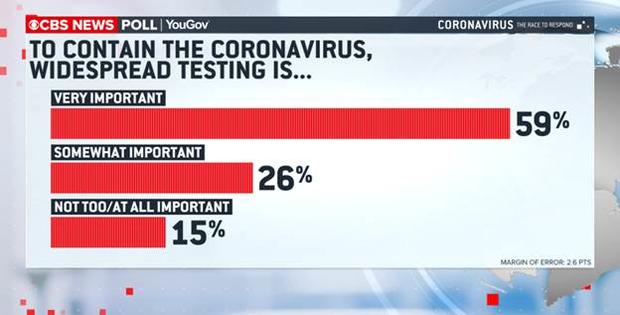 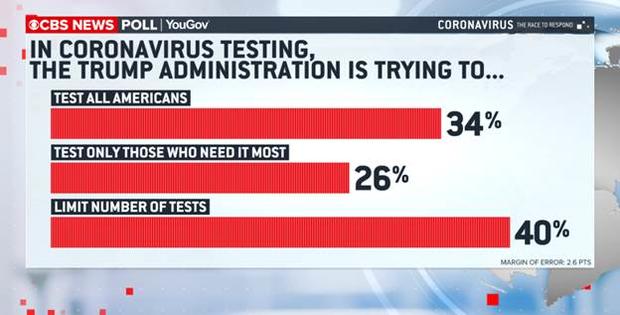 Four in 10 say the reopening pace for their state has been about right. But for the rest who disagree, there's more concern that states opened too fast: almost twice as many think their state moved too quickly, rather than too slowly. This is particularly true in the South, where 48% feel their state opened too quickly, more than feel this way than in any other region.

Personal experience weighs on this measure, as well: Americans who personally know someone who's contracted the virus — and those who say there are many COVID-19 cases in their area — are more likely to think their state reopened too quickly. Partisan differences also exist here, with Democrats more than twice as likely as Republicans to say their state reopened too quickly. 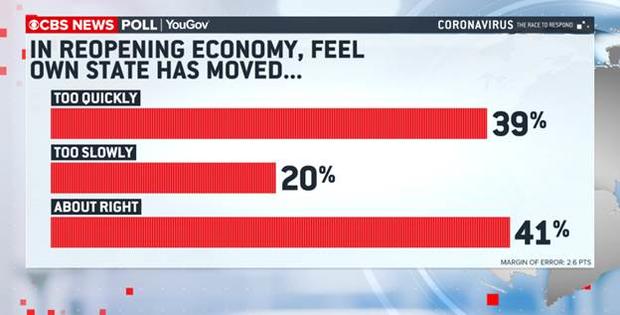 When asked if they feel safer or more at risk than they used to, few report feeling any safer. Across demographics and partisan lines, there's no group where a majority does. Most report feeling about the same risk as before. The percentage of people who are very concerned about getting the virus has gone up since earlier this month.

In the South, the percentage who are "very concerned" about getting the virus has risen nine points since early June — more than any other region. But like the country overall, partisanship plays a role: Southern Republicans remain far less concerned than Southern Democrats. 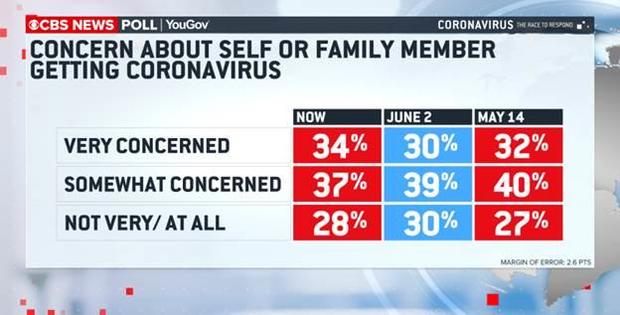 Despite reopening, many are not flocking to public places: just 1 in 5 report going to as many public places as they did before the outbreak. This hasn't changed since earlier this month.

As Americans do venture out, they're still doing so with awareness of some risk, and often out of necessity. Most of those who report going out say they're doing so because they need or want to, not because they think the health risks are low. Those who say their state has opened up too fast are more likely than those who don't to report feeling more at risk now.

Overall, views of how things are generally going in the country are decidedly negative. Seventy-six percent of Americans say things are going badly. 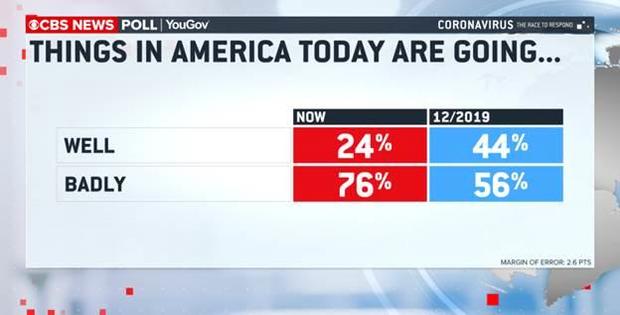 And as the virus has hit communities of color especially hard, black and Hispanic Americans are more likely to report knowing someone who's gotten it — the percentage of black people who say they or someone they know has been diagnosed with covid is up from last month. Views on the importance of testing are higher among African Americans than the public overall.

Over these weeks we've also been asking Americans how many people they think have died in the U.S. outbreak. Many (45%) give a range of 100,000-150,000, consistent with official figures. Those giving other ranges tend to say it's lower than that (25%), as opposed to higher (16%). As before, Republicans tend to give lower ranges than Democrats do.

Masks: Where do Americans get their guidance?

We asked people where they obtained their guidance on whether to wear a mask. Americans say they use their own assessments and that of health and medical professionals more so than politicians. This is true of both Democrats and Republicans, and although nearly half Republicans say they take guidance from the president, these Republicans are not less likely to wear masks than other Republicans. 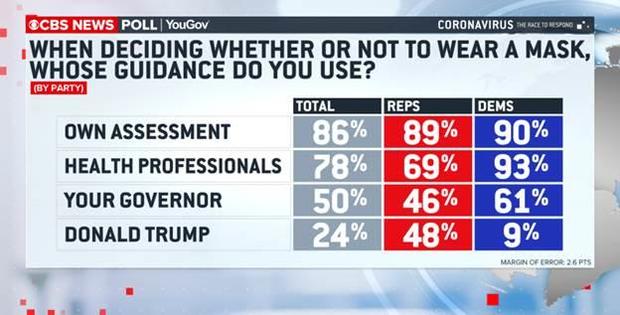 We asked people who say they wear masks "always" or "most of the time" how they feel when they see others not wearing one. They said they figured non-wearers must have been unconcerned about spreading or catching the virus (85%), felt they were not at risk (85%) and were not being considerate to others (82%). In perhaps another sign of how politics has permeated virus issues in the public mind, almost half of these regular mask-wearers felt the non-wearers were avoiding masks as a sign of support for the president.

We asked those who don't wear masks what they think about people who do. Few saw mask-wearing as a political statement toward the president. Most figured the mask-wearers had concern about spreading the virus (70%), that the person could be especially at risk (68%) — and half, 53%, thought the mask-wearers were "overreacting."

This CBS News survey was conducted by YouGov using a nationally representative sample of 2,009 U.S. adult residents interviewed between June 23-26, 2020. This sample was weighted according to gender, age, race and education based on the American Community Survey, conducted by the U.S. Bureau of the Census, as well as 2016 presidential vote and registration status. The margin of error is ± 2.6 points.

Off the top of my head and looking at these two graphics I would have to conclude Trump's response to the virus has hurt his re-election chances.