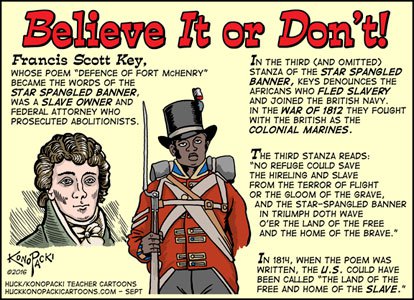 And where is that band who so vauntingly swore,
That the havoc of war and the battle's confusion
A home and a Country should leave us no more?
Their blood has wash'd out their foul footstep's pollution.
No refuge could save the hireling and slave
From the terror of flight or the gloom of the grave,
And the star-spangled banner in triumph doth wave
O'er the land of the free and the home of the brave.

" The Colonial Marines were black slaves that fought with the British in the War of 1812. And you know why they fought for the British?  Because the British told them "if we win, you get your freedom".  And when people are fighting for their freedom they can be vicious. And the colonial marines were vicious. They knew all the back trails because they had been slaves in the south. They knew where you could cross the rivers, and so they were of great assistance to the British in fighting the Americans. And so they were part of the troop that drove the Americans back into Washington D.C. and set the White House on fire. About three months later, Francis Scott Key, who was part of that group that was driven back to Washington , was now in Baltimore, at Fort McHenry, and he's watching the bombs bursting in air, and getting excited and getting motivated to write the national anthem. And one of the things Francis Scott Key wrote about was , you know these Colonial Marines, they're of concern because "what if all of them did that?"  So here is the end of the third verse of our national anthem written by Francis Scott Key

No refuge could save the hireling and slave
From the terror of flight or the gloom of the grave,
And the star-spangled banner in triumph doth wave
O'er the land of the free and the home of the brave.

That is YOUR national anthem. OUR national anthem. And my point is, that from Plymouth Rock white supremacy was the basis of how this country was formed. It doesn't mean we are not a great country, it doesn't mean we are currently all bigots, it means this is the truth about how our country was formed.  And we can either deal with it realistically as the truth, or we can keep trying to deny it. And in terms of keep denying the true nature of our history, I feel like just saying, how's that working out for us?"

The Truth About The Confederacy In The United States

I am not suggesting that we should change the national anthem, I like the song and it is our most patriotic song and our national anthem, but the fact of history is that Francis Scott Key, for some reason included in the lyrics of that poem a passage that attacks and belittles and wishes death upon people who were fighting for their freedom. Runaway slaves owed no allegiance to the United States, where they had been enslaved. So they joined up with the British and were promised their freedom in exchange for serving in the British military. And Francis Scott Key, a slaveowner, belittles them in his great poem about the battle of Fort Mc Henry.

… The story, as most of us are told, is that Francis Scott Key was a prisoner on a British ship during the War of 1812 and wrote this poem while watching the American troops battle back the invading British in Baltimore. That—as is the case with 99 percent of history that is taught in public schools and regurgitated by the mainstream press—is less than half the story.

To understand the full “Star-Spangled Banner” story, you have to understand the author. Key was an aristocrat and city prosecutor in Washington, D.C. He was, like most enlightened men at the time, not against slavery; he just thought that since blacks were mentally inferior, masters should treat them with more Christian kindness. He supported sending free blacks (not slaves) back to Africa and, with a few exceptions, was about as pro-slavery, anti-black and anti-abolitionist as you could get at the time.

Of particular note was Key’s opposition to the idea of the Colonial Marines. The Marines were a battalion of runaway slaves who joined with the British Royal Army in exchange for their freedom. The Marines were not only a terrifying example of what slaves would do if given the chance, but also a repudiation of the white superiority that men like Key were so invested in.

All of these ideas and concepts came together around Aug. 24, 1815, at the Battle of Bladensburg, where Key, who was serving as a lieutenant at the time, ran into a battalion of Colonial Marines. His troops were taken to the woodshed by the very black folks he disdained, and he fled back to his home in Georgetown to lick his wounds. The British troops, emboldened by their victory in Bladensburg, then marched into Washington, D.C., burning the Library of Congress, the Capitol Building and the White House. You can imagine that Key was very much in his feelings seeing black soldiers trampling on the city he so desperately loved.

A few weeks later, in September of 1815, far from being a captive, Key was on a British boat begging for the release of one of his friends, a doctor named William Beanes. Key was on the boat waiting to see if the British would release his friend when he observed the bloody battle of Fort McHenry in Baltimore on Sept. 13, 1815. America lost the battle but managed to inflict heavy casualties on the British in the process. This inspired Key to write “The Star-Spangled Banner” right then and there, but no one remembers that he wrote a full third stanza decrying the former slaves who were now working for the British army:

And where is that band who so vauntingly swore,

That the havoc of war and the battle’s confusion

A home and a Country should leave us no more?

No refuge could save the hireling and slave

From the terror of flight or the gloom of the grave,

And the star-spangled banner in triumph doth wave

O’er the land of the free and the home of the brave.

In other words, Key was saying that the blood of all the former slaves and “hirelings” on the battlefield will wash away the pollution of the British invaders. With Key still bitter that some black soldiers got the best of him a few weeks earlier, “The Star-Spangled Banner” is as much a patriotic song as it is a diss track to black people who had the audacity to fight for their freedom. Perhaps that’s why it took almost 100 years for the song to become the national anthem.