Cotton: Slavery 'Necessary' to 'Development of Our Country'

Republican Sen. Tom Cotton opposes the 1619 Project: "As the Founding Fathers said, it was the necessary evil upon which the union was built, but the union was built in a way, as Lincoln said, to put slavery on the course to its ultimate extinction." 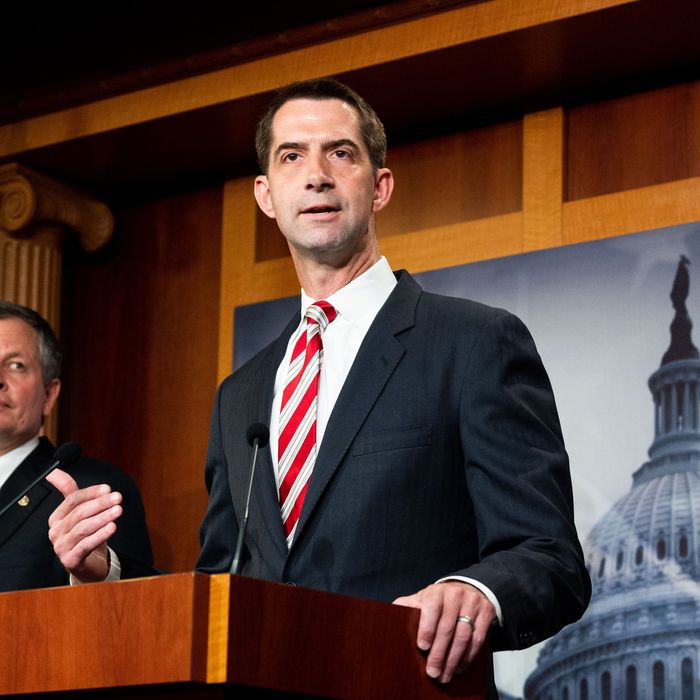 Tom Cotton has spent the Trump era elbowing his way to the front of the line to be the future of nationalist demagoguery. He recently seized upon a rich vein of material in the 1619 Project, a provocative journalistic effort in historical revisionism published by the hated New York Times, from which Cotton has vowed to protect America's schoolchildren.

But then, having located his political sweet spot, Cotton went too far. In an interview with the Arkansas Democrat Gazette , Cotton proclaimed, "As the Founding Fathers said, it was the necessary evil upon which the union was built, but the union was built in a way, as Lincoln said, to put slavery on the course to its ultimate extinction."

The normally robotic Cotton quickly realized that he had committed a ghastly, and perhaps even fatal mistake. Trolling the Times is the sweet spot for a Republican on the rise. Defending the necessity of slavery — even in the Trump era — is not. And so Cotton and his allies quickly launched a furious counteroffensive insisting he had not, in fact, defended the necessity of slavery. Cotton had merely attributed this view to the Founders:

Cotton's view was quickly repeated by conservativemedia. Cotton appeared this morning on Fox & Friends, which displayed his quote. Cotton gave a fake laugh and replied, "Well that's fake news, Brian. That is not what I said." (It was, in fact, a word for word transcription of his entire quote, which he has not denied.)

Of course it is possible to attribute beliefs to the Founders without endorsing them. However Cotton has previously praised the beliefs of the Founders in unstinting terms. His previous attacks on the 1619 Project defended the "noble principles of freedom and equality on which our nation was founded." His bill proclaimed, "The self-evident truths set forth by that Declaration are the fundamental principles upon which America was founded." It is a little hard to square these statements with Cotton's current stance that he is not fully onboard with the Founders.

Cotton's mistake was to go beyond merely trolling the 1619 Project to offer his own historical analysis, which led him into explaining the decisions of the Founders and thereby to justify their acceptance of slavery. His analysis is woefully incorrect. The Constitution did not place slavery "on the course to its ultimate extinction." In the decades after the founding, slavery exploded in size.

The Constitution did not establish any process that would allow slavery to be ended peacefully. That is why it took a Civil War.

The most ambiguous part of Cotton's remark is why he believes slavery was "necessary." One possible meaning would be that it was necessary for anti-slavery Founders to compromise with pro-slavery Founders, who never would have joined a union if it required abolition. But the line Cotton uttered beforehand suggests something else. Here is the full Cotton quote:

We have to study the history of slavery and its role and impact on the development of our country because otherwise we can't understand our country. As the Founding Fathers said, it was the necessary evil upon which the union was built, but the union was built in a way, as Lincoln said, to put slavery on the course to its ultimate extinction.

Cotton seems not to be saying that slavery was necessary in order to get slave owners to accept the union, but that it was necessary to the "development of our country."

Here, oddly enough, he is recapitulating one of the most important errors in the 1619 Project itself. While it is a valuable corrective to glossy hagiography about the founding, the 1619 Project overstates the centrality of slavery to the American economy. One essay presents the American revolution as being intended to protect slavery. Another relies on double counting and other blunt errors to exaggerate the centrality of cotton in the northern economy. The thrust of these analytic errors is to present slavery not merely as a horror but as the basis for the development of the American economy, the foundation of American prosperity.

Cotton of course is not endorsing the moral precepts of the 1619 Project. But by saying slavery was necessary to the "development of our country," he is endorsing its analytic precepts. What many historians dispute, but Cotton and the 1619 Project agree, is that chattel slavery was a benefit not only to slave owners but to the United States as a whole.

The difference between the two is that the 1619 Project correctly centers the ghastly shadow of slavery over political conflict in American life, while Cotton breezily waves it away. Cotton was one of just two members of the Senate Armed Services Committee to vote against a commission to remove "names, symbols, displays, monuments and paraphernalia that honor or commemorate the Confederate States of America" from military bases. The proliferation of memorials to traitors who fought against the United States is the residue of a propaganda campaign to justify and minimize slavery and to keep in place institutions that carry on the white supremacist ideology it produced.

Cotton calls the 1619 Project a "racially divisive, revisionist account" of history. That is a perfect definition of what Cotton himself is determined to preserve.

Tom Cotton Plantation would like to run for president one day, but the fact that he would get few votes outside the Trump coalition will probably unpersuade him to do so.

What a surprise that “evil” was left out of the headline, or that cotton was restating the views of the founders.

chait and other outlets that have seized upon this but ignore the lies of the 1619 project rely on their readers ignorance and laziness to push an ideological agenda.

That the US revolted from England to protect slavery is the most egregious Lie  and central to the theme of the 1619 project. Even chait concedes the project also overstates the Importance of slavery to the US economy.

That the US revolted from England to protect slavery

I would agree that's a lie. I guess I need to read up on this thing

It’s as false as claiming that the civil war had nothing to do with slavery. To use it as the basis for teaching kids history is very disturbing. It’s placing ideological narrative over historical accuracy.

Sean, Cotton said what he believes the founding fathers intended, but never disagrees with it.

injecting lead at 700+fps into autocrats, aristocrats, and enemies of the US Constitution was also necessary...

It was necessary to allow Slavery when the United States was formed because we couldn't win a war against England unless the Slave Colonies joined the Union. If we insisted that slavery be outlawed the Slave Colonies would not have joined us and probably would have helped England. So the Founding Fathers had a tough choice either allow slavery or remain English colonies (which allowed slavery anyway). If slavery hadn't been tolerated there would be no United States of America today, we barely won with all 13 colonies and help from the French. Even if by some miracle we did win without the slave colonies they wouldn't have been part of the USA so they might have formed their own country and possibly could still have slavery today since there wouldn't have been a Civil War. Sometime tough choices have to be made whether you like it or not but the seeds from a rotten apple can grow into a healthy tree that bears good fruit.

"If you haven’t yet seen the film Mr. Jones , please do. It’s based on the true story of Gareth Jones, a young Welsh journalist who risked his life to expose the 1930s Ukraine famine engineered by Stalin, and that took the lives of up to 12 million Ukrainians. Stalin aside, the villain of the story is Walter Duranty, the   New York Times ‘s Pulitzer-winning Moscow correspondent, who deliberately lied about the famine to shield Stalin from Western accountability. In the Times article in which he consciously lied to discredit Gareth Jones’s reporting, Duranty acknowledged that things were not perfect in the Soviet Union, but the great things that Communists were trying to achieve there were worth it. He used the memorable phrase (repeated in the film): “You can’t make an omelet without breaking eggs...

As Princeton historian Sean Wilentz, himself a man of the left, has said:

But Jones’s lie is politically useful in advancing the identity-politics goals of progressives.   Oprah Winfrey and Lionsgate are going to make a series of films and feature television shows based on the 1619 Project.  They are changing the cultural memory of Americans, in a way that deceives people about what America was, and is"

What we can say with certainty is that Tom Cotton ranks among the worst Senators in U.S. history.