What in hell is wrong with Trump and his minions?

The Trump administration has been accused of attempting to pressure another foreign country into helping Trump's reelection prospects, according to a letter from the House Foreign Affairs Committee.

In the letter, Foreign Affairs Committee chairman Rep. Eliot Engel demands Chapman explain an article in which the ambassador is said to have asked for the tariffs to be lowered as a "favor" from the Brazilian government to the Trump reelection campaign.

"Iowa is the largest ethanol producer in the United States…and could be a key player in Trump's election," an article in the Brazilian newspaper O Globo reads, according to the letter. "Hence the importance - according to Chapman - for the Bolsonaro government to do the U.S. a favor."

Beyond the report in O Globo, the New York Times notes, another Brazilian outlet, Estadao, published a similar story based on its own reporting, with its journalists finding that Chapman had made the request, and was rebuffed by government officials.

Alceu Moreira, a Brazilian congressman, also told the Times that Chapman "had made repeated references to the electoral calendar during a recent meeting the two had about ethanol."

Engel has called for Chapman to respond to the reports by August 4, and for him to provide "any and all documents referring or related to any discussions" with Brazilian officials.

If the reports are accurate, the letter states, Chapman's actions could be in violation of the Hatch Act, which prevents federal employees from engaging in certain political activities, such as partisan campaigning for candidates.

A State Department spokesperson said in a statement that Chapman's efforts were part of a policy of pushing for lower tariffs in general, not narrowly focused on supporting an incumbent presidential campaign.

"Allegations suggesting that Ambassador Chapman has asked Brazilians to support a specific U.S. candidate are false," the statement reads. "The United States has long been focused on reducing tariff barriers and will continue do so."

The reports are also of concern because of how closely they echo the request that led to Trump's impeachment.

Last July, Trump asked Ukrainian President Volodymyr Zelensky to "do us a favor" during a phone call in which he asked the leader to look into the business dealings of Hunter Biden, the son of then-candidate, now presumed Democratic nominee Joe Biden. In that call, Trump appeared to condition military aid badly needed by Ukraine on Zelensky's willingness to search for information that might be used to discredit Biden.

A congressional investigation into that call revealed the ways the Trump administration used traditional diplomatic channels — most notably the office of the US ambassador to the European Union — to forward that goal.

It isn't clear whether Trump was involved in Chapman's reported pressure campaign about ethanol, but as Vox's Zack Beauchamp wrote during 2019's impeachment hearings, the testimony of another of Trump's ambassadors — former US Ambassador to the European Union Gordon Sondland — showed a willingness on Trump's part "to use US foreign policy as a tool to cement his own hold on power."

In delivering that warning, the letter explicitly links Chapman's reported campaign to the 2016 election, the outcome of which foreign governments repeatedly attempted to sway, according to the results of a Senate investigation.

"Given the events of 2016, it is all the more important for U.S. ambassadors serving our country abroad to not insert themselves into U.S. elections or encourage foreign government officials from any branch of government to do so," the letter reads.

This warning follows intelligence reports that find Russia has actively worked to disrupt November's elections — as well as the Democratic presidential primary. But politicians and experts have warned that the US is not as prepared as it ought to be to combat such interference, leaving it vulnerable to meddling attempts not just by adversaries, but by also by Americans who, as Engel writes, "should know better."

Does nobody in Trump's orbit know better than this?

Can we have a remedial class for them then?

They should all be wearing a ''dunce hat''. 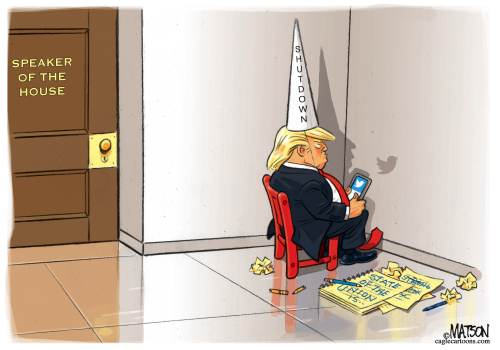 Somebody really should make Trump write, "I will not solicit campaign help from foreign governments", one hundred times on a blackboard...

The MAGA hat is the qualifier.

Trump's only affection lies with autocrats or plutocrats.

New York Trump was never accepted by the moneyed elite who viewed him as a liar, cheat and a fraud whose only accomplishment was burning through his father's inheritance in a New York second.

The thing is - there is no down side to this as long as Barr is AG and the Republicans control the Senate.  Heck - Trump has probably even put the squeeze on Nauru.

Republicans do not care and Democrats (at this time) can do nothing about it.

Things get more complicated if Trump loses the election and the Senate.

There may be a downside with voters on Nov 3rd...

Can the left get any dumber?

So an act that would help US trade is considered the same as supporting Trump's re election? Maybe we should have impeached Obama for all of those piss poor trade deals he negotiated; they were all to help him or Hillary get re-elected or elected.

A State Department spokesperson said in a statement that Chapman's efforts were part of a policy of pushing for lower tariffs in general, not narrowly focused on supporting an incumbent presidential campaign. "Allegations suggesting that Ambassador Chapman has asked Brazilians to support a specific U.S. candidate are false," the statement reads. "The United States has long been focused on reducing tariff barriers and will continue do so."

Trade wars with China, Canada, Mexico, and Europe on tariffs ring any bells for those not tone deaf with TDS?

Oh, and the Democrats already tried to impeach over the whole Ukraine BS. They failed; but by all means keep beating that dead horse for all it is worth.

Brazil is pissed off that Trump is trying to get the US in a better trade position with them. Something no Establishment politician on either side would ever try.  So they are trying to hurt Trump's re election chances. See how that works?

Most of the world would love to have BIden be president- as he would be on his knees sucking them off. No more pressuring NATO countries to pay their fair share; no more trade war with China, Europe or anywhere else (outside of Russia); Iran not held to task over nuclear weapons; and China off the hook for lying about and allowing the spread of Covid 19.  Yes the world would be a much better place with the US going back to be the subservient country it was before Trump.