One of the World Health Organization's six special envoys on Covid-19 has highlighted Sweden's virus response as a model that other countries should be emulating in the long run. 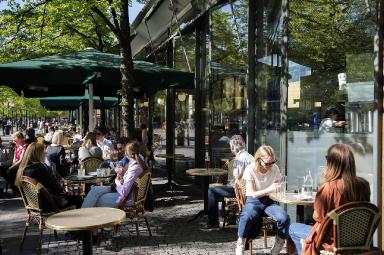 People sit at tables outside a cafe at Kungstrdgrden in Stockholm, in May.

People sit at tables outside a cafe at Kungstrdgrden in Stockholm, in May.

One of the World Health Organization's six special envoys on Covid-19 has highlighted Sweden's virus response as a model that other countries should be emulating in the long run.

Dr. David Nabarro, speaking in a radio interview with Magic Talk in New Zealand, said, "For all countries, the real approach we've got to aim for is through behavior that's adopted everywhere."

Nabarro said the key to a sustainable coronavirus strategy is trust, and pointed to Sweden as a case in point. The Nordic nation imposed far fewer restrictions on movement than others, and instead relied on Swedes to act responsibly and embrace the guidelines laid out by the country's health authorities.

To be sure, Sweden's Covid-19 death rate is considerably higher than in many other countries, at 57 per 100,000. But the pace of new infections and deaths has slowed markedly since the end of June. The development prompted Sweden's national health agency to propose raising the limit on certain public gatherings to 500 people from 50.

In contrast, other governments around the world are once again imposing stricter measures amid a resurgence in cases.

Nabarro described a lockdown as "a blunt instrument" that "really bites into the livelihoods of everybody, particularly poorer people and small businesses."

In response to the envoy's remarks, the director-general of Sweden's public health agency, Johan Carlson, said in an interview with newspaper Svenska Dagbladet: "We are one of the few countries with a limited spread of infection, unlike several countries in Europe where the infection is returning sharply."

"I call it the champagne cork effect," Carlson said.

But Sweden's Covid strategy still has many critics, including from within the country. Fredrik Elgh, a professor of virology at Umea University, points to the high death toll as evidence the light-touch approach has failed.

"We have almost 6,000 dead. We have betrayed our elderly," he said in the Svenska Dagbladet report. "We should test and trace infection much more. But the Public Health Agency does not want that."

Carlson of the public health agency and Sweden's minister for health and social affairs, Lena Hallengren, are due to hold a press conference on the country's Covid strategy later on Monday.

Some really good news coming out of Sweden.  Check out the data new daily cases and deaths they are looking good.

highlighted Sweden's virus response as a model that other countries should be emulating in the long run.

duh.   said that when this crap first started.

If we simply had the masks at the beginning, we could have required everyone to wear a mask, social distance and wash their hands, instead of destroying so many lives with that horrendous lie & advice from Dr Fauci.

What is this expert?  A  moron?  Sweden is the model for HOW NOT TO DEAL WITH CO-VID 19.

That honor goes to us.

Regarding herd immunity is what I was referring to.

What is this expert?

I thought you followed the "experts?"

I'm only going to include the information regarding herd immunity, you can check out the source to see the other types of immunity.

What Is Herd Immunity and Could It Help Prevent COVID-19?

Some leaders — for example, Boris Johnson, the prime minister of the United Kingdom — suggested it might be a good way to stop or control the spread of the new coronavirus, which causes COVID-19. Herd immunity is also called community immunity and herd or group protection.

Herd immunity happens when so many people in a community become   immune   to an infectious disease that it stops the disease from spreading.

This can happen in two ways:

Herd immunity can work against the spread of some diseases. There are several reasons why it often works.

There are also many reasons why herd immunity won’t yet work to stop or slow the spread of  SARS-CoV-2  or COVID-19, the disease caused by an infection of the new coronavirus.

When a large percentage of the population becomes immune to a disease, the spread of that disease slows down or stops.

Many viral and bacterial infections spread from person to person. This chain is broken when most people don’t get or transmit the infection.

This helps protect people who aren’t vaccinated or who have low functioning immune systems and may develop an infection more easily, such as:

For example,   19 out of every 20 people   must have the   measles   vaccination for herd immunity to go into effect and stop the disease. This means that if a child gets measles, everyone else in this population around them will most likely have been vaccinated, already have formed antibodies, and be immune to the disease to prevent it from spreading further.

The goal of herd immunity is to prevent others from catching or spreading an infectious disease like measles.

However, if there are more unvaccinated people around the child with measles, the disease could spread more easily because there is no herd immunity.

To visualize this, picture someone without immunity as a red dot surrounded by yellow immune dots. If the red dot can’t connect to any other red dots, there is herd immunity.

The percentage of people that must have immunity to safely slow or stop an infectious disease is called the “herd immunity threshold.”

Herd immunity does work for some illnesses. People in Norway successfully developed at least partial herd immunity to the H1N1 virus ( swine flu ) through vaccinations and natural immunity.

Similarly, in Norway, influenza was projected to cause fewer deaths in 2010 and 2011 because more of the population was immune to it.

Herd immunity can help stop the spread of illness, such as swine flu, and other pandemics within an entire country. But it can change without anyone knowing. Also, it doesn’t always guarantee protection against any disease.

For most healthy people, herd immunity isn’t a good alternative to getting vaccinated.

Not every illness that has a vaccine can be stopped by herd immunity. For example, you can contract  tetanus  from bacteria in your environment. You don’t contract it from someone else, so herd immunity doesn’t work for this infection. Getting the vaccine is the only protection.

You can help build herd immunity to certain diseases in your community by making sure you and your family have up-to-date vaccinations. Herd immunity may not always protect every individual in the community, but it could help prevent widespread disease.

Social distancing and frequent handwashing are currently the only ways to help prevent you and those around you from contracting and potentially spreading SARS-CoV-2, the virus that causes COVID-19.

There are several reasons why herd immunity isn’t the answer to stopping the spread of the new coronavirus:

Herd immunity for COVID-19 in the future

Scientists are currently working on a vaccine for SARS-CoV-2. If we have a vaccine, we may be able to develop herd immunity against this virus in the future. This would mean getting the SARS-CoV-2 in specific doses and making sure the majority of the world’s population is vaccinated.

Almost all healthy adults, teens, and older children would need to be vaccinated to provide herd immunity for people who can’t get the vaccine or who are too ill to become naturally immune to it.

If you’re vaccinated and build immunity against SARS-CoV-2, you most likely wouldn’t contract the virus or transmit it.

Herd immunity is community or group protection that happens when a critical number of the population is immune to a certain disease. It can help stop or slow the spread of an infectious disease like measles or swine flu.

The safest way to get immunity is through vaccination. You can also get natural immunity by contracting the illness and building an immune response to it.

Herd immunity isn’t the answer to stopping the spread of SARS-CoV-2, the new coronavirus that causes COVID-19. Once a vaccine is developed for this virus, establishing herd immunity is one way to help protect people in the community who are vulnerable or have low functioning immune systems.

I spent a lot of time trying to get good data on Sweden.

It was in most  cases, contradictory.

During the same period of time politicians claimed that Sweden was approaching "herd" immunity while random antibody studies claimed that only about 7% of the population had been infected (or had antibodies).

You probably need to speak Swedish to find the useful information.

It helps that Sweden has a relatively low population density 63 per square mile - about like  combining Oregon with Minnesota in total population and density. That seems to slow down the spread somewhat.

It also helps that the country pretty much closes down during parts of the summer for vacations.

Their approach may be the greatest thing since sliced bread - we won't really know for another  6 months or so.

It certainly is a good approach if you want to reduce nursing home crowding and improve the balance sheet for your country's retirement fund obligations.