Why We Should Hope Trump Survives His Bout With Covid-19

No one should wish that Trump will, like his grandfather Frederick a century ago, become a pandemic victim. To think that way is to be as immoral as Donald.

Donald Trump's late-night tweet that he and his wife have contracted COVID-19 brings to mind the word "hope" in four ways, all tests of the character of Americans.

We should hope that Trump and his much younger wife recover fully and are healthy again well before the last voting day of Nov. 3. America needs a clean referendum on Trump's presidency, not a vote about an ailing or even dead man.


Trump will lose the popular vote by at least 16 million ballots, hopefully by more than 20 million. Our democracy needs an unambiguous rejection of Trump. And voters need to disentangle themselves from his smack of moral jellyfish—the blind, spineless Republicans who abandoned principle and their oaths to defend our Constitution to toss themselves into his waves of political chaos.

Third, we should hope that Trump lives at least as long as his crooked father, who died at 93. The president should experience his just deserts for a life of white-collar crime capped by his efforts to destroy our democracy just to serve his insatiable lust for money and his pathetic need for adulation.

Fourth, we should hope that as Trump endures the coming humiliation that he so richly deserves the next administration doesn't let bygones be bygones. A Biden administration should offer leniency for those who confess fully and cooperate even as it vigorously prosecutes every single appointee who broke laws for Trump. Those criminal actions threaten our health, our safety and most of all our liberty.

Even if Trump dies, the next president should not shirk from his duty to hold these domestic evildoers to account. He should not make the awful political and policy mistake Barack Obama made when he let corrupt bankers who brought down our economy a dozen years ago continue on their way because he feared prosecution would interfere with restoring the economy.

No one should wish that Trump will, like his grandfather Frederick a century ago, become a pandemic victim. To think that way is to be as immoral as Donald. Don't lower yourself. Awful and damaging as Trump has been, follow the ancient wisdom in Luke 6:31. "Do to others as you would have them do to you."

That Trump never has lived the biblical Golden Rule speaks to his lack of character. Do not let his moral corruption infect your character. Be better. Be best.

Wishing death or illness on anyone conjures up the worst of human nature. We will not, we cannot ever make America what it could be—a society that ennobles free human spirit to become the best that our species can attain—until we cleanse our own souls.

For America to endure and prosper we must actively embrace only goodwill toward all, even the vile Donald Trump.

That does not mean that we tolerate Trump's criminal conduct as a private citizen or while in office. We should show with our votes that giving succor to white supremacists, abusing the children of asylum seekers, letting polluters endanger us all and signing a tax law that takes from the many to give to the rich few are un-American, indeed they are anti-American.

To live long and prosper as a nation, to live free, we must judge others as we would have them judge us. To do that we must develop both critical thinking skills and our moral character, a job that starts in the home and should continue in our schools, public and private. Then as citizens, we must apply our knowledge, always with caution because facts change, unlike principles.

We must hope that the ideas of the Enlightenment which inspired our revolution 244 years ago survive the manipulations by ideological marketing organizations that employ advertising techniques to sell us the political equivalent of fast food. We need reasoned and rational debate rooted in facts, not mindless chants like "lock her up" and attacks on journalists as enemies of the people.

We must hope that once we transition back to normality that we will not forget the nightmare Trump has created. We must begin to grow into a better America, both as an idea and as a society that will endure and inspire the whole world. Vigorous debate, hopefully civil, will separate the rash from the wise in our marketplace of ideas.

And we must begin a never-ending search for the best possible leaders, better than we have had in most of our history. We need women and men who we can trust to defend faithfully our Constitution, to at long last establish equal justice for all and to hold true to the principle that ours is a nation of laws, not men.

Third, we should hope that Trump lives at least as long as his crooked father, who died at 93. The president should experience his just deserts for a life of white-collar crime capped by his efforts to destroy our democracy just to serve his insatiable lust for money and his pathetic need for adulation.

David Cay Johnston, the author of the seeded article, has written numerous books about Trump's lifelong corrupt activity, and is an expert on the subject.

Hope everyone recovers from this virus.  Unfortunately, that is not always the case.

As for Trump, truth and justice awaits.

Only 34 percent of Americans say Trump is truthful about COVID: poll

Only just over one-third of American adults believe President   Donald Trump   is honest in his public comments about the novel coronavirus, according to recent polling data. A survey conducted by Reuters and Ipsos showed 34 percent of respondents feel Trump has relayed truthful information about the respiratory illness, while 55 percent say he has not. Another 11 percent of individuals surveyed were unsure.

Results of the Reuters-Ipsos poll, which collected responses from 1,005 U.S. adults, about 60 percent of whom are likely voters, were released Sunday morning. Participants shared responses online on Friday and Saturday, after announcements that the president and first lady had tested positive for COVID-19. Trump announced their diagnoses in   a message   shared to Twitter early Friday morning, following an initial tweet that noted Hope Hicks, former White House communications director and current adviser to the president, had contracted the disease.

"This evening I am happy to report that the President is doing very well. He is not requiring any supplemental oxygen, but in consultation with specialists we have elected to initiate Remdesivir therapy," Conley said in an update released by the White House on Friday evening. The Food and Drug Administration (FDA) has not approved Remdesivir, an antiviral drug, for widespread use as a COVID-19 treatment method. However, the drug did receive FDA clearance for emergency use this past May.

In   a video   recorded at Walter Reed and posted to social media on Saturday, Trump told viewers he was "feeling much better" since his admission to the hospital. Still, at 74 years old, the president's risk of developing more serious health complications from COVID-19 is higher than it would be for others.

"I came here, wasn't feeling so well. I feel much better now," Trump said in the video, recorded from the Maryland military hospital. "We're working hard to get me all the way back...I'll be back, I think I'll be back soon."

Trump's diagnosis followed months of controversial, and widely criticized, statements from the president about COVID-19 and ways to treat it. After notoriously referring to the virus outbreak as a "hoax" near the onset of the global pandemic, he went on to tout the effectiveness of anti-malaria medication hydroxychloroquine as a treatment approach despite an absence of scientific evidence to support his claims. A recent study that analyzed Trump's claims throughout the pandemic suggested he was   the most significant source   of COVID-19 misinformation throughout the outbreak.

The president was not seen wearing a face covering in public until July, even as leading public health authorities recommended everyone wear masks to reduce virus transmission and numerous government officials effected state and local orders that required people to wear them. He frequently appears at crowded rallies as part of his re-election campaign, where attendees are often pictured standing shoulder to shoulder without face masks.

During the first presidential debate last week, Trump said he thinks   "masks are OK,"   but he mocked Democratic rival   Joe Biden 's use of them.

"When needed, I wear masks. I don't wear masks like him," Trump said of Biden. "Every time you see him, he's got a mask. He could be speaking 200 feet away from them, and he shows up with the biggest mask I've ever seen." 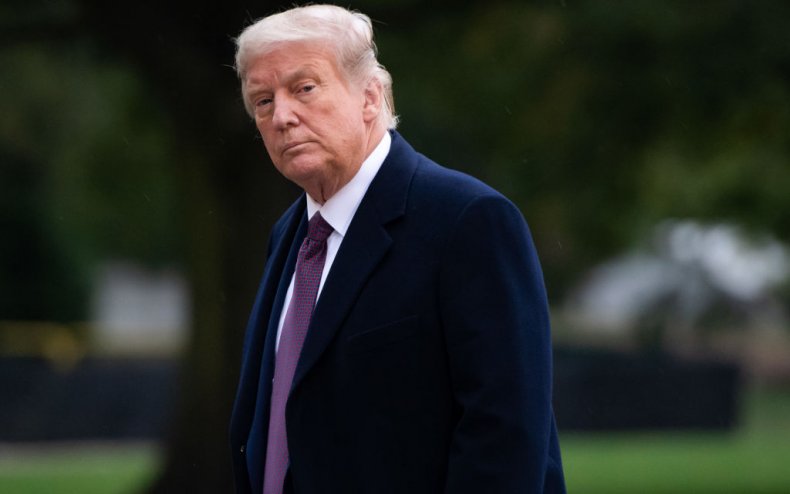 US President Donald Trump walks from Marine One after arriving on the South Lawn of the White House in Washington, DC, October 1, 2020, following campaign events in New Jersey. - White House Chief of Staff Mark Meadows said on October 1, 2020, that he was optimistic about a rapid recovery for the president as he confirmed that Trump has "mild symptoms" after testing positive for Covid-19. "The president and the First Lady... remain in good spirits," Meadows told reporters.  SAUL LOEB/AFP via Getty Images/Getty

Why We Should Hope Trump Survives His Bout With Covid-19

Because if he doesn't, we'll have to put up with Pence, the only person possibly worse than Trump.

If I could be sure he would recover, without sequels, I would wish him a long and miserable time in bed.