'We Need to Take Away Children,' Jeff Sessions Said

Need? What are they? Vampires? Do they feed on children's tears? 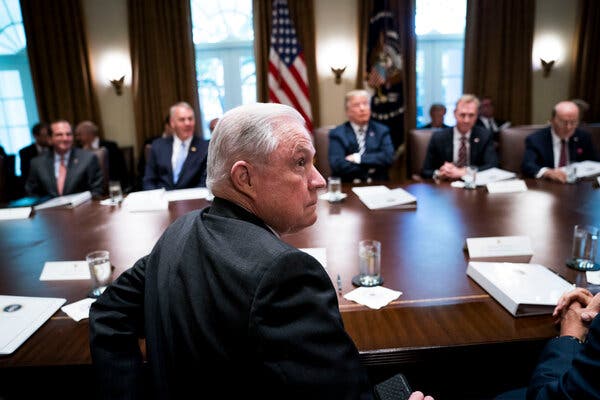 WASHINGTON — The five U.S. attorneys along the border with Mexico, including three appointed by President Trump, recoiled in May 2018 against an order to prosecute all illegal immigrants even if it meant separating children from their parents. They told top Justice Department officials they were "deeply concerned" about the children's welfare.

But the attorney general at the time, Jeff Sessions, made it clear what Mr. Trump wanted on a conference call later that afternoon, according to a two-year inquiry by the Justice Department's inspector general into Mr. Trump's "zero tolerance" family separation policy.

"We need to take away children," Mr. Sessions told the prosecutors, according to participants' notes. One added in shorthand: "If care about kids, don't bring them in. Won't give amnesty to people with kids."

Rod J. Rosenstein, then the deputy attorney general, went even further in a second call about a week later, telling the five prosecutors that it did not matter how young the children were. He said that government lawyers should not have refused to prosecute two cases simply because the children were barely more than infants.

"Those two cases should not have been declined," John Bash, the departing U.S. attorney in western Texas, wrote to his staff immediately after the call. Mr. Rosenstein "instructed that, per the A.G.'s policy, we should NOT be categorically declining immigration prosecutions of adults in family units because of the age of a child."

The Justice Department's top officials were "a driving force" behind the policy that spurred the separation of thousands of families, many of them fleeing violence in Central America and seeking asylum in the United States, before Mr. Trump abandoned it amid global outrage, according to a draft report of the results of the investigation by Michael E. Horowitz, the department's inspector general.

The separation of migrant children from their parents, sometimes for months, was at the heart of the Trump administration's assault on immigration. But the fierce backlash when the administration struggled to reunite the children turned it into one of the biggest policy debacles of the president's term.

Though Mr. Sessions sought to distance himself from the policy, allowing Mr. Trump and Homeland Security Department officials to largely be blamed, he and other top law enforcement officials understood that "zero tolerance" meant that migrant families would be separated and wanted that to happen because they believed it would deter future illegal immigration, Mr. Horowitz wrote.

"The department's single-minded focus on increasing prosecutions came at the expense of careful and effective implementation of the policy, especially with regard to prosecution of family-unit adults and the resulting child separations," the draft report said. 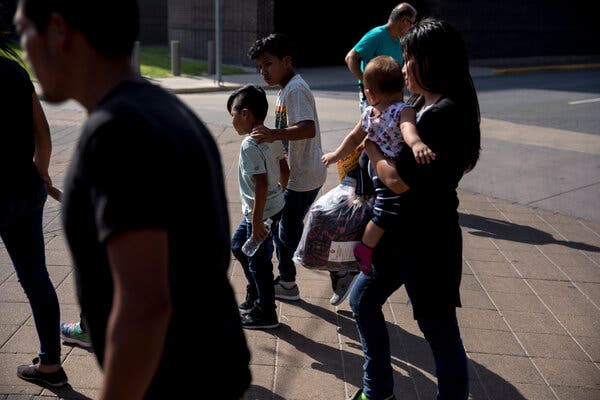 Migrant families were dropped off by immigration officials at a bus station in McAllen, Texas, in 2018.Credit...Ilana Panich-Linsman for The New York Times

The draft report, citing more than 45 interviews with key officials, emails and other documents, provides the most complete look at the discussions inside the Justice Department as the family separation policy was developed, pushed and ultimately carried out with little concern for children.

This article is based on a review of the 86-page draft report and interviews with three government officials who read it in recent months and described its conclusions and many of the details in it. The officials, who spoke on the condition of anonymity because they had not been authorized to discuss it publicly, cautioned that the final report could change.

Before publishing the findings of its investigations, the inspector general's office typically provides draft copies to Justice Department leaders and others mentioned in the reports to ensure that they are accurate.

Mr. Horowitz had been preparing to release his report since late summer, according to a person familiar with the investigation, though the process allowing for responses from current and former department officials whose conduct is under scrutiny is likely to delay its release until after the presidential election.

Mr. Sessions refused to be interviewed, the report noted. Mr. Rosenstein, who is now a lawyer in private practice, reacted defensively in his interview with investigators in response to questioning about his role, according to two of the officials. Mr. Rosenstein's former office submitted a 64-page response to the report.

"If any United States attorney ever charged a defendant they did not personally believe warranted prosecution, they violated their oath of office," Mr. Rosenstein said in a statement. "I never ordered anyone to prosecute a case."

Gene Hamilton, a top lawyer and ally of Stephen Miller, the architect of the president's assault on immigration, argued in a 32-page response that Justice Department officials merely took direction from the president. Mr. Hamilton cited an April 3, 2018, meeting with Mr. Sessions; the homeland security secretary at the time, Kirstjen Nielsen; and others in which the president "ranted" and was on "a tirade," demanding as many prosecutions as possible.

Mr. Hamilton declined to comment for this article, as did Mr. Horowitz's office. Mr. Sessions did not respond to requests for comment. Alexa Vance, a spokeswoman for the Justice Department, disputed the draft report and blamed the Homeland Seurity Department for referring cases for prosecution.

"The draft report relied on for this article contains numerous factual errors and inaccuracies," she said. "While D.O.J. is responsible for the prosecutions of defendants, it had no role in tracking or providing custodial care to the children of defendants. Finally, both the timing and misleading content of this leak raise troubling questions about the motivations of those responsible for it."

The draft report also documented other revelations that had not previously been known:

For two years, Ms. Nielsen has taken the brunt of the public criticism for separating migrant families because of her decision to refer adults crossing the border illegally with children for prosecution. A day after the president's retreat, Mr. Sessions distanced his department from the decision, telling CBN News that "we never really intended" to separate children.

That was false, according to the draft report. It made clear that from the policy's earliest days in a five-month test along the border in Texas, Justice Department officials understood — and encouraged — the separation of children as an expected part of the desire to prosecute all illegal border crossers.

"It is the hope that this separation will act as a deterrent to parents bringing their children into the harsh circumstances that are present when trying to enter the United States illegally," a Border Patrol official wrote on Oct. 28, 2017, to the U.S. attorney in New Mexico, according to the draft report.

ImageRod J. Rosenstein, then the deputy attorney general, told prosecutors in 2018 that government lawyers should not have refused to prosecute two immigration cases because of the ages of children involved.Credit...Pool photo by Greg Nash

After the pilot program in Texas ended, the report asserted, Mr. Sessions, Mr. Hamilton and Mr. Rosenstein pushed aggressively to expand the practice across the entire southwestern border, with help from prosecutors.

In a briefing two days after Christmas in 2017, top Justice Department officials asked Mr. Bash for statistics from the pilot program, conducted by his predecessor, that could be used to develop "nationwide prosecution guidelines." Mr. Bash, a former White House adviser, did not receive a follow-up request for the information. Thinking that the idea had been abandoned, he did not provide it.

By April 2018, Mr. Sessions nevertheless moved to enact the zero-tolerance policy across the entire border with Mexico. Mr. Rosenstein told the inspector general that Mr. Sessions "understood what the consequences were."

"The A.G.'s goal," he said, "was to create a more effective deterrent so that everybody would believe that they had a risk of being prosecuted."

But the Justice Department still needed to persuade Ms. Nielsen to refer all families for prosecution, which she had been resisting. The draft report says a pressure campaign culminated in a May 3 meeting in which Mr. Sessions insisted that Customs and Border Protection begin referring all of those cases to prosecutors.

A note from Mr. Hamilton to Mr. Sessions before the meeting indicated: "You should lead this discussion."

"We must vigorously enforce our criminal immigration laws to ensure that there are consequences for illegal actions and to deter future illegal immigration," Mr. Sessions planned to say, according to the draft report. "That means that an illegal alien should not get a free pass just because he or she crosses the border illegally with a child."

When the group voted by a show of hands to proceed, Ms. Nielsen was the only one who kept her hand down, according to two people familiar with the vote, which was reported earlier by NBC News. The next day, Ms. Nielsen backed down, signing a memo referring all adults for prosecution and clearing the way for the children to be separated.

The decision roiled the prosecutors along the border. In Arizona, Elizabeth Strange, the acting U.S. attorney, led a minor rebellion, temporarily declining six cases, citing concern about the children. That prompted a rebuke from top Justice Department officials, who demanded to know "why would they be declining these cases?"

Justice Department officials have repeatedly claimed that they thought the adults would be prosecuted and reunited with their children within hours of being separated. But the inspector general found a memo informing top officials that sentences for adults ranged from three to 14 days, making it all but certain that children would be sent to the custody of officials at the Health and Human Services Department for long periods of time.

"We found no evidence, before or after receipt of the memorandum, that D.O.J. leaders sought to expedite the process for completing sentencing in order to facilitate reunification of separated families," the inspector general wrote.

Over all, Mr. Horowitz concluded in the draft, Mr. Sessions and other senior department officials "were aware that full implementation of the zero-tolerance policy would result in criminal referrals by D.H.S. of adults who enter the country illegally with children and that the prosecution of these family-unit adults would result in children being separated from families."

Can Trump's Justice Department be any more venal?

There is only one child that needs to be taken away....the two year old in the Oval Office.

Sessions.  Always thought he was strange.  Still do.

Child separation has been used many times as a weapon of fear/terror.  Pol Pot.  The Nazis.  ISIS.  Taliban.  Many other devious ideologies.  Get the picture now?

And then there is the Trump.  'Escalator glide and grab em'.  Little more to it.

Mass kidnapping and imprisonment of children is a crime against humanity and those responsible should be prosecuted at the International Court of Justice (the World Court).

Is there an American family besides the very rich white ones that Trump and his venal crew do not want to wretch asunder? To divide? To do harm?

Apparently the gop is aiming to undo marriage equality. How do they figure that will go over now?