In Alaska’s annual battle of furry heavyweights , a salmon-chomping bruin nicknamed 747 – like the jumbo jet - has emerged as the people’s choice as the most fabulously fat.

The bear, one of more than 2,200 brown bears roaming Alaska’s Katmai National Park and Preserve, was victorious late Tuesday after a week of frenzied online voting (by humans) in what has become an international sensation: Fat Bear Week.

Winner 747 was a worthy champion, the park said in a statement. “This year he really packed on the pounds, looking like he was fat enough to hibernate in July and yet continuing to eat until his belly seemed to drag along the ground by late September,” the park said.

Fat Bear Week pits 12 bears against each other – unbeknown to the bears themselves, obviously, as the two-legged mammals of this world have their fun – in basketball-style playoff brackets. Bear fans compared photos and voted online for their favorites from last Wednesday to Tuesday night.

Katmai’s bears can grow to well over 1,000lb (453kg) from summer feasting as they ready for the winter, as they can also lose a third of their body weight during hibernation. That makes Fat Bear Week about “survival of the fattest”, as the Park Service puts it.

Katmai, a 4m-acre park sprawling over mountains, lakes, streams and coastline, is famous for having the world’s densest population of brown bears, the coastal version of grizzlies.

Within Katmai, the Brooks River is a prime place for brown bears to feast. There, bears congregate in summer and autumn to snatch salmon swimming upstream to spawning grounds, with much of the action captured by a webcam operated by explore.org, one of the Fat Bear Week partners.

This year, the river was more of a bear paradise than usual, thanks to a record salmon run, said Naomi Doak, a media ranger at Katmai.

What was scarce along the Brooks River was people. Peak summer normally sees about 500 visitors a day but with the coronavirus pandemic, that was down to 50 to 100, she said.

“The combination of the big salmon run and fewer people, this has really handed the river to the bears,” she said.

I remember someone posting a article about this contest a few months ago.  Anyway here's the winner

Now I remember why I used to love watching Northern Exposure.

Fatter than the average bear. He found some good hunting grounds.

He will sleep good this winter. 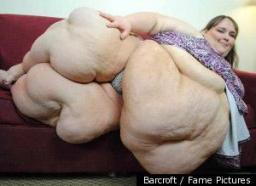 My dad used to say that fat looks good on everything except humans. He had a point...

If you weren't a friend I would have you banned for life! How the hell do I forget that!?!?!?