It's heartening to see so many White people dancing in the streets over Biden's victory. But as I contemplate the end of Trump's presidency, I realize he's freed us of any illusions we may have had about another segment of White America.

Many scoffed when President Trump declared that he's done more for Black people than any president since Abraham Lincoln. But as I contemplate the end of Trump's presidency, I realize that he has set millions of Black Americans free in at least one disturbing way:

He has freed us of any illusions we may have had about a certain segment of White America. Even though Joe Biden won this election, Black America has lost some measure of hope. It was heartening to see so many White people dancing in the streets Saturday after Biden's victory was announced. But the fact that a president who is widely viewed as a racist can still command so many White votes -- after also playing down a pandemic that has killed at least 234,000 Americans -- is chilling. I'm still trying to digest that side of White America. Trump's 2016 victory could be dismissed as a fluke, the political equivalent of a banked three-point shot against a flawed opponent. But Trump's ability to make this presidential race so close after what America has seen and heard these last four years is proof that our country has a large, durable White constituency that is willing to ignore or support explicit racism. That segment of White America has taught me some lessons about America that I don't think I will ever 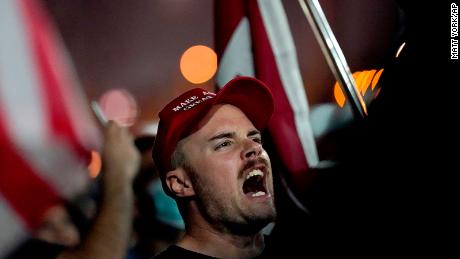 And I now know a president can be accused by his niece of using the N-word and it can barely cause an outcry. I once thought that crass displays of racism from elected leaders were as outdated as black-and-white TV sets. I still remember not too long ago when a White US senator cruising to re-election abruptly ended his chances -- and his political career -- when he used an obscure racial slur to describe an Indian-American man at a campaign stop. Yet Trump built a White wall of racial resentment among his supporters that refused to collapse, no matter what he said or did. Granted, not all Trump voters are White. In fact, Trump received a larger share of Black votes than he did in 2016. But most of Black America had already made up its mind about Trump: At least 80% of African Americans in a Washington Post-Ipsos poll released in January think he's a racist. Supporters line up for a Trump rally in Hickory, North Carolina, on November 1, 2020. His hold on a certain segment of White America seems so mystifying to many of us that one Black scholar used the language of addiction to describe it. Carol Anderson, author of "White Rage," wrote that under Trump many Americans are strung out on the most "devastating, reality-warping drug to ever hit the US" -- White supremacy. "It has made millions of Americans forsake their God and jettison their patriotism just to get a taste," she wrote. "High on its effects, its users felt powerful, heady, even as they and everything around them disintegrates."

But my education doesn't end there. In fairness, the Trump era also taught me about another side of White America. I now know that likely millions of White Americans were willing to risk their lives in the middle of a pandemic to hit the streets to protest racial injustice. I now know that there are countless White Americans who swallowed tear gas and took rubber bullets to the face while standing shoulder to shoulder with Black and brown anti-racism protesters. Supporters of Black Lives Matter hold signs during a protest in Los Angeles, California, on June 10, 2020. I now know that as intoxicating as Trump's unholy trifecta of racism, sexism, and anti-immigrant hostility was to millions of White Americans, most rejected it. He never reached a 50% approval rating. More than half of all Americans think he is a racist, according to one recent poll. I now know that many White Americans were so disgusted by what they saw and heard these last four years that they turned out in record numbers to vote against Trump. I now also know that I'm not the only Black person who feels this.

Harry Belafonte, the activist and singer who was a central figure in the civil rights movement, also spoke this week about the other White America. He said that "for all the bitter lessons we have learned" from Trump's presidency, he's also learned something else: "That we have never had so many White allies, willing to stand together for freedom, for honor, for a justice that will free us all in the end, even those who are now most fearful and seething with denial." Still, it's what I don't know that is most unsettling. What if there was no pandemic? What if the economy was still humming along and most people's 401(k)s were nice and fat? Would that have been enough for most White Americans to return Trump to office? Would they have found a way to rationalize Trump's racism, or minimize it by calling it something else like "ethnonationalism" or "racially charged?" Voters wait in line to cast ballots in the presidential election on November 2, 2020 in Cedar Rapids, Iowa. Trump's presidency was a super-spreader event for racism. But I wonder if much of White America has built such a tolerance for racism that they see no need for change. Biden's potential victory will offer no herd immunity from what Trump unleashed these last four years The people who either cheered or ignored his racism aren't going anywhere, and neither is he. According to one Daily Beast article, "top officials in both parties are bracing for a world in which he and the brand of politics he unleashed remain a predominant force for the foreseeable future."

The hardest lesson of all

I once thought that the US was on a glide path to the kind of country that the Rev. Martin Luther King Jr. evoked in his "I Have a Dream" speech. Sure, there were going to be bumps and bruises, but we would get there. We were on our way to becoming the compassionate, multireligious, multiracial democracy that the late historian Vincent Harding loved to evoke. President Trump greets supporters before speaking at a campaign rally on October 30, 2020, in Rochester, Minnesota. But I have experienced emotions over these past four years that I never expected. I have seen former White friends -- people I thought I knew -- gloating on social media about Trump's racism. I have heard many of my friends and family members say they hesitated to go out in public on Election Day because they were afraid of being attacked by angry White people. Those are the same type of stories I heard from older relatives who traveled through the Jim Crow South.

The morning after Election Day was even worse. My phone lit up with texts and voicemails from disbelieving friends and relatives. One friend said he couldn't believe that so many Americans would vote for a man whose administration snatched children from the arms of migrant mothers. A relative told me he thinks White voters "don't give a sh*t" about us," and that he's ashamed to be an American. Now I'm starting to lose my faith in democracy itself. Maybe people are too tribal to build a genuine multiracial and multireligious democracy. Maybe Greek philosophers like Socrates were right when they said that democracies were too inherently unstable because people couldn't be trusted to pick wise leaders. Voters cast ballots at the Kentucky Exposition Center on November 3, 2020, in Louisville, Kentucky. Maybe millions of White Americans will never accept me as an equal, no matter what I or others like me do. I'm thankful for the many White Americans who risked their lives to stand with Black protesters and other people of color this year. But I now know that millions of White Americans remain MAGA all the way, even though Trump lost. Some of them even took to the streets this week to claim the election was stolen. Trump may be defeated, but Trumpism and its brand of White racial grievance are here to stay. That's been the hardest lesson of all.

There is a lot of truth to this article, sad to say.

The teachings and philosophy of Goebbels are successfully fostered by the right wing movement in the World.  The only question remaining is whether it can sustain itself.

Maybe millions of White Americans will never accept me as an equal, no matter what I or others like me do. I'm thankful for the many White Americans who risked their lives to stand with Black protesters and other people of color this year. But I now know that millions of White Americans remain MAGA all the way, even though Trump lost. Some of them even took to the streets this week to claim the election was stolen. Trump may be defeated, but Trumpism and its brand of White racial grievance are here to stay. That's been the hardest lesson of all.

Donald Trump's political career began with a huge expression of white grievance, and all these years later it is still there in our face in the form of so many people voting for the worst president in American history.  The struggle continues.

I'll never trust in the American Voter like I did before!

That so many were fooled so long was disillusioning.

I'll never trust in the American Voter like I did before!

If there is one thing, that Trump did, that's good for this country, it is that he turned on the lights to America's kitchen.  We now know that we still have a lot of cockroaches and other creepy crawlies that need to be recognized and dealt with.  We can no longer claim America has overcome racism.