Republican Philadelphia City Commissioner Al Schmidt responded Wednesday to attacks on him by President Trump over the tabulation of votes in the city, warning that "bad actors" were "lying" about the vote-counting process.

"I think people should be mindful that there are bad actors who are lying to them," Schmidt said on CNN's "New Day." "And they need to turn to people that they trust and to sources of information that they trust and not rumors and not nonsense included in the lawsuits or anything else like that, to make sure that they have confidence in this system, and that their vote, regardless of who they voted for, is going to be counted."

Trump blasted Schmidt in a tweet Wednesday morning, saying Schmidt was "being used big time by the Fake News Media to explain how honest things were with respect to the Election in Philadelphia."

A guy named Al Schmidt, a Philadelphia Commissioner and so-called Republican (RINO), is being used big time by the Fake News Media to explain how honest things were with respect to the Election in Philadelphia. He refuses to look at a mountain of corruption & dishonesty. We win!
- Donald J. Trump (@realDonaldTrump) November 11, 2020

Since media outlets projected President-elect Joe Biden would win Pennsylvania and therefore the White House, the president and allies have repeatedly alleged voter fraud despite a lack of evidence in the state, particularly Philadelphia.

Schmidt told "60 Minutes" that his office has received veiled death threats, saying in an interview that aired Sunday that there were "calls to our offices reminding us that 'This is what the Second Amendment is for, people like us.'"

Lawyers for the Trump campaign are currently seeking to block the state from certifying its election results due to the use of mail-in ballots, which they claim created a "two-tiered" voting system. Attorney General Josh Shapiro (D) called the lawsuit "the latest meritless lawsuit to challenge Pennsylvania's election, which was overseen by bipartisan election officials and was lawful, fair and secure."

More and more, we see that Trump and his lackeys are lying about voter fraud.  SHAME ON THEM !

I'm still trying to figure out with our ability to cheat and win a presidential election how we didn't thrown out  McConnell and Graham. What a horrible oversight on the Dems part.

According to all authoritative accounts, they tried.

On Ingraham (fox) she actually had some disguised person saying they saw voter fraud first hand.

It would be comical if these people were not serious...

Supposedly four people were filling out ballots in a poling place parking lot, during broad daylight, out of a marked Biden/Harris van, with people walking around seeing them...

They think they have unmasked this person... 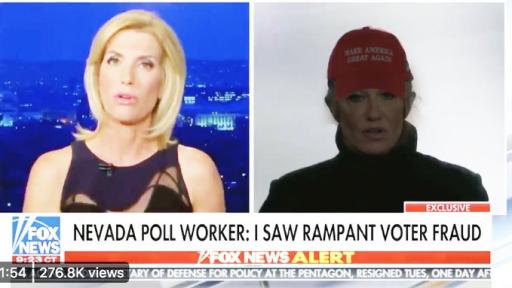 "I think people should be mindful that there are bad actors who are lying to them,"

That might be. It wouldn’t surprise me because well . . . people lie. But it seems that answering one baseless accusation with another one doesn’t accomplish anything. A better response would be “I believe our process was fair and legitimate, but we are an open book and welcome investigation to confirm it.”.