Biden's national popular vote totals and lead over Trump is more impressive than people realize: other than the two tickets he shared with Obama, Biden won a higher share than any Democrat since 1964, and more than most Republican winners too.

Obama-Biden was the only Democratic ticket since 1964 to win a higher percentage of the national popular vote than Biden-Harris. Photo: Scott Olson/Getty Images

As votes continue to trickle in, Joe Biden's national popular vote lead over Donald Trump, and his percentage of the total vote, is beginning to look pretty impressive despite how close the Electoral College vote has remained, — and also despite Trump's increasingly empty claims that he somehow actually won. Biden currently leads Trump by over five million votes, or by 3.4 percent of the total. Both numbers are certain to go higher. His popular vote percentage lead is already higher than that of the popular vote winner in 2016, 2004, 2000, 1976, 1968 and 1960. And with the exception of the two earlier Democratic tickets on which Biden appeared (2008 and 2012), the 50.8 percent of the national popular vote the Biden-Harris ticket has won is higher than that of any Democratic ticket since 1964. And that total could soon eclipse the 51.1 percent Obama and Biden received in 2012.

Biden's percentage of the national popular vote is also higher than that of any Republican presidential nominee since George H.W. Bush in 1988. George W. Bush's 2004 victory over John Kerry is remembered as a close race, but not one that was seriously contested. W. won 50.7 percent of the popular vote, prevailing by a 2.4 percent margin. For that matter, the endlessly touted political genius Ronald Reagan took only 50.7 percent of the popular vote when he won the presidency in 1980. The man he beat, Jimmy Carter, was for many years the last Democrat (and the only Democrat since LBJ) to win a popular vote majority (until Obama — and Biden — did so in 2008), He won 50.1 percent of the vote in 1976.

To be sure, Biden didn't win by anything like a landslide, but efforts to minimize his popular vote numbers don't bear comparison to other candidates in our often highly competitive two-party system.

Joe Biden's victory is becoming more impressive as all the last remaining voters continue to be tallied!

And there is news on the Internet just now that projected Biden has won Arizona:

I can imagine Trump will go ballistic when he learns that. He still can't accept that the only fraud in this election his HIM .

And get this! A Republican Senator will step in and give Biden the rightful Intelligence daily briefing information by the end of the week if Trumps staff will withhold it from him.

Oklahoma Republican Sen. James Lankford said Wednesday that he will intervene if the Trump administration has not allowed President-elect Joe Biden access to presidential daily intelligence briefings by the end of the week, one of the first rights of a presidential candidate after winning the election.

Now that is pouring gasoline on an open fire at this point. A Republican going against Trump's orders.

And, Lankford is a huge Trump sycophant...

Lankford is a huge Trump sycophant...

True. Although I have absolutely no sympathy for Trump, I think it is a shame that so many people are now taking advantage of him in his current mental situation, and egging him on to do things that will not only damage Trumps reputation, but, that of their own party. To say nothing of America.

They will not win, and in the long run, they will pay the price in their own careers moving forward. Not all Republicans are crazed and blind sheep, they have a mind of their own and realize that what Trump and his radical base is doing is tearing down their own party for years to come.

I believe ultimately Biden will be the POTUS Jan 20th, but it is not a popular vote election no matter how many times you say that.

This is a weird story.

But yet the writer expects us to be impressed anyway?

Who is doing that? I see a lot of talk about legitimate votes and all that, but minimizing the popular vote? I'm just not sure what is meant by that. Isn't all the conflict over the electoral college votes?

the endlessly touted political genius Ronald Reagan took only 50.7 percent of the popular vote when he won the presidency in 1980

Yeah. Not bad for a guy mocked for being an actor or too old to be president. And when he ran for reelection in 1984, he earned 58.8% of the popular vote, beating Walter Mondale (poor guy only won his home state) by more than 18 percentage points. Not to mention the fact that he won 525 (97.6%) electoral college votes. You want me to be impressed? Beat that. 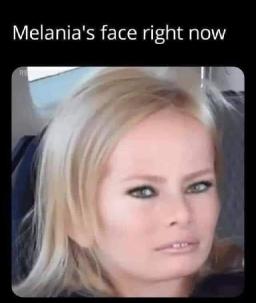 I think her eyes are blood red with anger....anger that Trump won't concede to the obvious that he has lost the election. NOTHING he can do now will change that. The only thing it will do is make his name and legacy a historical failure, and shame his family name for the rest of their lives.

He is so insane at this point that sanity has no chance to reach his understanding. Melania, Jared, Ivanka and others who know the right thing that should be done have no way of reaching him to do the right thing. He is totally out of his mind now with vengeance and fear.

The reality of what is coming is settling in...

The reality of what is coming is settling in...

True...and it is becoming clearer to him every day that his days as President will end as of January 20ht, no matter how hard he and his radical base tries to negate the election. He just makes a bigger fool of himself every day.

And he has no one to blame but himself.

Yet, I expect he will find someone to blame...

Yet, I expect he will find someone to blame...

That is Trumps standard MO, so why would he change it now. And people like McConnell and Graham who are heavily egging Trumps on to continue resisting and refusing to concede are the ones who are pushing Trump the hardest to destroy not only himself, but, GOP party as well, and that includes them. Obviously they have something very precious to them to lose if Trump is no longer President. So they are firing him up to keep him mentally delusional.

But, they will be sorry as well, and obviously they think they are untouchable. And like Trump, when the sh*t goes down they too, will find someone else to blame. And find that their trusted puppet will not hesitate to throw them under the bus as well.