Duke Webb, 37, was also charged with attempted murder for the shooting that left three dead and three others wounded.

Webb, an active military member, is being held at the Winnebago County Jail without bond, police said at a Sunday press conference. He is due in court Monday at 1:30 p.m.

Rockford Police Chief Dan O'Shea said the three people killed were a 73-year-old man, a 69-year-old man and a 65-year-old man. Two of those wounded were teenagers, O'Shea said. A 14-year-old boy was shot in face and airlifted to a hospital in Madison, Wisconsin, where he is now in stable condition. A 16-year-old girl was shot in the shoulder and taken to a local hospital and later released after being treated for the wound. A 62-year-old man was also wounded and is in in critical condition.

O'Shea said the shooting is believed to be a random act and "there is no prior meeting or any kind of relationship between the suspect and any of the victims in this case."

According to O'Shea, Webb was taken into custody without incident, although he allegedly tried to hide his weapons and obscure his identification. O'Shea also indicated most of the shooting was caught on surveillance cameras inside the building.

© Provided by CBS News Mugshot of Duke Webb, 37. Webb is accused of killing three and wounding three others in a shooting at an Illinois bowling alley. / Credit: WIFR-TV

The bowling alley itself was closed due to the state's COVID-19 lockdown, however, a bar located above the bar was open, which is allowed under the current restrictions. The two teenagers were there to pick up food for a takeout order, O'Shea said.

"The Don Carter Lanes family and the entire bowling community is in shock by this act of pure evil," said bowling alley owner Brand Sommer, CBS affiliate WIFR-TV reports. "Our collective prayers go out to the families of the victims. God please help them all. So sad for one sick person to cause so many misery. We are grateful for the fast and professional actions of the law enforcement agencies that prevented further loss of life by apprehending the shooter so quickly."

According to the U.S. Army, Webb is a Special Forces assistant operations and intelligence sergeant assigned to the 3rd Battalion, 7th Special Forces Group (Airborne), located at Camp Bull Simons at Eglin Air Force Base in Florida. He joined the Army in 2008 and was on leave Saturday.

Colonel John W. Sannes, the commander of the U.S. Army's 7th Special Forces Group, released a statement saying, "We are shocked and saddened to learn about this tragic event and our thoughts and prayers are with the families of those killed and wounded."

The Army said it will provide assistance in the investigation.

Continue ReadingShow full articles without "Continue Reading" button for {0} hours. Microsoft may earn an Affiliate Commission if you purchase something through recommended links in this article.

An active duty special forces army sergeant randomly shoots up a bar full of people he does not know, hundreds of miles from where he lives, killing three people and wounding three others, and it barely makes the news.

What has happened to America ?

"there is no prior meeting or any kind of relationship between the suspect and any of the victims in this case."

I have noticed the media dancing around (i.e. deliberately ignoring) a disturbing coincidence with this shooting. The picture above, which comes with the seed, shows the big sign they have on the street. Here is what the actual building looks like - and is called: 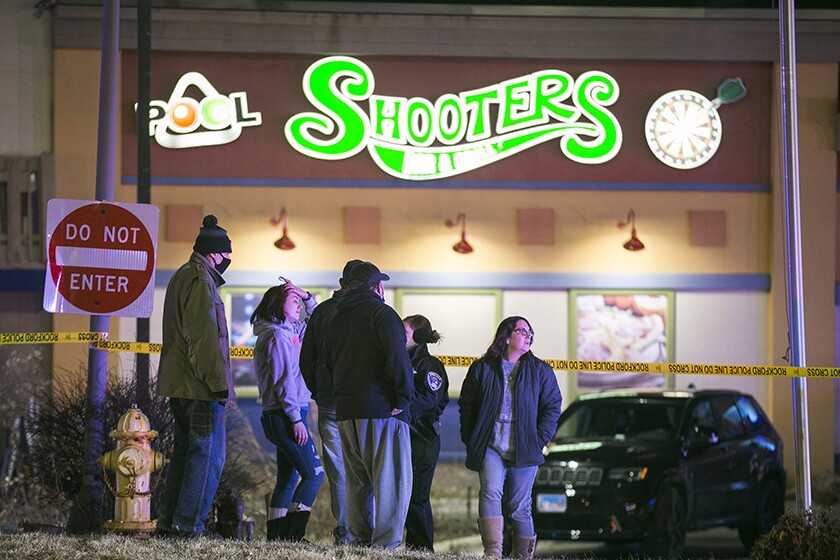