More than six months after she was suspended for putting up racist and offensive posts on Facebook targeting former President Barack Obama and former Secretary of State Hillary Clinton, a state court officer who worked in Brooklyn has reportedly been fired. Sgt. Terri Pinto Napolitano was terminated on Dec. 23 by George Silver, deputy chief … More than six months after she was suspended for putting up racist and offensive posts on Facebook targeting former President Barack Obama and former Secretary of State Hillary Clinton, a state court officer who worked in Brooklyn has reportedly been fired.

Sgt. Terri Pinto Napolitano was terminated on Dec. 23 by George Silver, deputy chief administrative judge of the New York City courts, after he ruled on evidence that was presented on Napolitano's disciplinary hearing, according to the New York Law Journal.

Napolitano's Facebook posts were made in early June and, when they were discovered by the Law Journal and other publications, caused an uproar, according to an article in the Brooklyn Eagle on June 11.

The posts reportedly showed Obama hanging from a noose under the headline "The True American Dream," with the word "Traitor" underneath. She also put up a post that showed Hillary Clinton with the words, "It's Not Over Till the Fat Lady Swings," as Clinton is being escorted to the gallows. 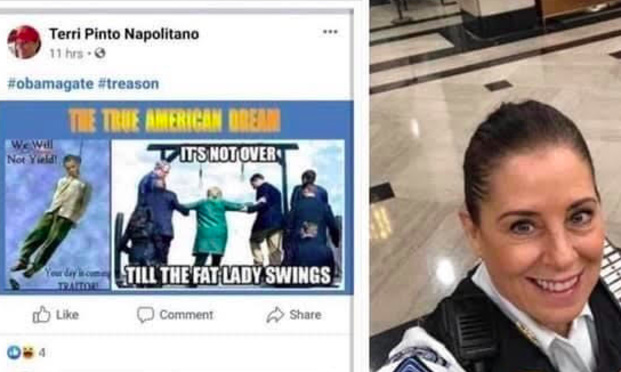 At the time, Napolitano was suspended for 30 days without pay and has had her gun taken away from her. The matter was referred to the Inspector General for investigation. Her conduct was roundly condemned by groups in the Brooklyn and New York City legal and law-enforcement communities. "This man right here has done nothing to this woman," said Bruce Green, president of the Brooklyn Anti-Violence Coalition, as he pointed to a photo of President Obama. "She doesn't even know him, but she's suggesting the death of a father, a husband, a former president. You're threatening this man's life and suggesting that someone hangs here. What are we talking about here? What right do you have to someone else's life?"

Her own union, the NYS Court Officers Association, issued a statement against her conduct, the Eagle reported at the time.

"It has come to our attention that a [court officer] has recently posted on Facebook a vile, racist photo depicting and advocating the lynching of an African-American man and woman," the statement issued by the NYSCOA said.

"This conduct is abhorrent, by anyone, at any time, and under any circumstances. But at this critical moment in our history — when our nation is reeling from the death of George Floyd and its aftermath — it is a sickening and unpardonable offense against every colleague in our court system, as well as the vast and diverse public that we serve," the union statement continued.

Napolitano, 57 years old at the time, worked in the Criminal Court at 120 Schermerhorn St.

According to the website SeeThroughNY, she also tweeted the hashtag OBAMAGATE with her posts. Obamagate referred to a conspiracy theory popularized by President Donald Trump on May 10 that alleged that Obama had conspired to entrap President Donald Trump's national security advisor, Michael Flynn, as part of an overall plot to bring Trump's administration down. The Associated Press issued a report in May that said there was "no evidence" that such a theory was true.

The Law Journal also reported that on June 6, Chief Judge Janet DiFiore sent a memo to court personnel saying that an "employee recently posted on Facebook a vile, racist photo depicting and advocating the lynching of an African American man and woman." The memo also said the Facebook post is "abhorrent … at any time," the Law Journal reported.

Why in the world did it take six months to fire her ?

There is usually a process (thanks to unions). I'm actually surprised that she was fired. She needs a better union. If she were a teacher, I suspect the administrative version of "wild horses" could not have gotten her fired.

It had to go through channels and with the pandemic, many of the people have not been able to get to work.  At least it finally happened.

While I would guess that many - if not most - people would disapprove of this particular expression of hers, it does present a First Amendment issue.

Public employees are generally allowed to opine (even if it be vulgar, as here) in their private lives on issues and people of public concern. Obama and Clinton - and their actions as public officials - certainly fall into that category. I am assuming, also, that her Facebook account is her own private account.

Furthermore, her post doesn't seem to fit into the SCOTUS defined prongs for incitement to violence.

For those reasons, if she is willing and able to pursue a legal remedy, I would expect her to ultimately prevail in court.

There are literally hundreds of examples of people who were fired for something they wrote on Facebook.

The American teachers were fired for doing or saying something about kids that broke a rule of employment and that ended up on Facebook. That's different than privately opining on public issues. One teacher unfortunately forfeited her rights by resigning. But also even then she wasn't accused of the same kind of thing. For all we know, she violated some code of conduct.

I think this lady still has a case if she wants (and can afford) to pursue it. Of course, in the legal system, she is vastly outgunned and outfunded by the government. The government can defend the case at its leisure til the end of time.

These guys may have violated some particular policy that stands up in court for some reason (like them knowingly agreeing to it as a condition of employment.) That may be the the case with Napolitano, too.

Either way, you still have to choose to fight for your rights or it never gets adjudicated. Many people don't make the attempt.

What rights? The right to call for the death of national politicians? This woman works for the US criminal justice system and you think this is acceptable?

Your devil's advocate act got tired a long time ago.

This has been explained to you already.

The right to call for the death of national politicians?

Who is being called? Unless you can identify them, and a direct connection between them and the speaker, and show knowledge of the likelihood that such a call will lead to imminent action, then your complaint of a "call" is legally without significance.

This woman works for the US criminal justice system and you think this is acceptable?

Acceptable on what grounds? I see an artistic, though vulgar, expression of political speech. It's not the kind of thing I would ever post, but I don't find it criminal or worthy of losing one's job. I wonder if you would be as offended if that was Trump swinging from the rope.

Did this bother you? 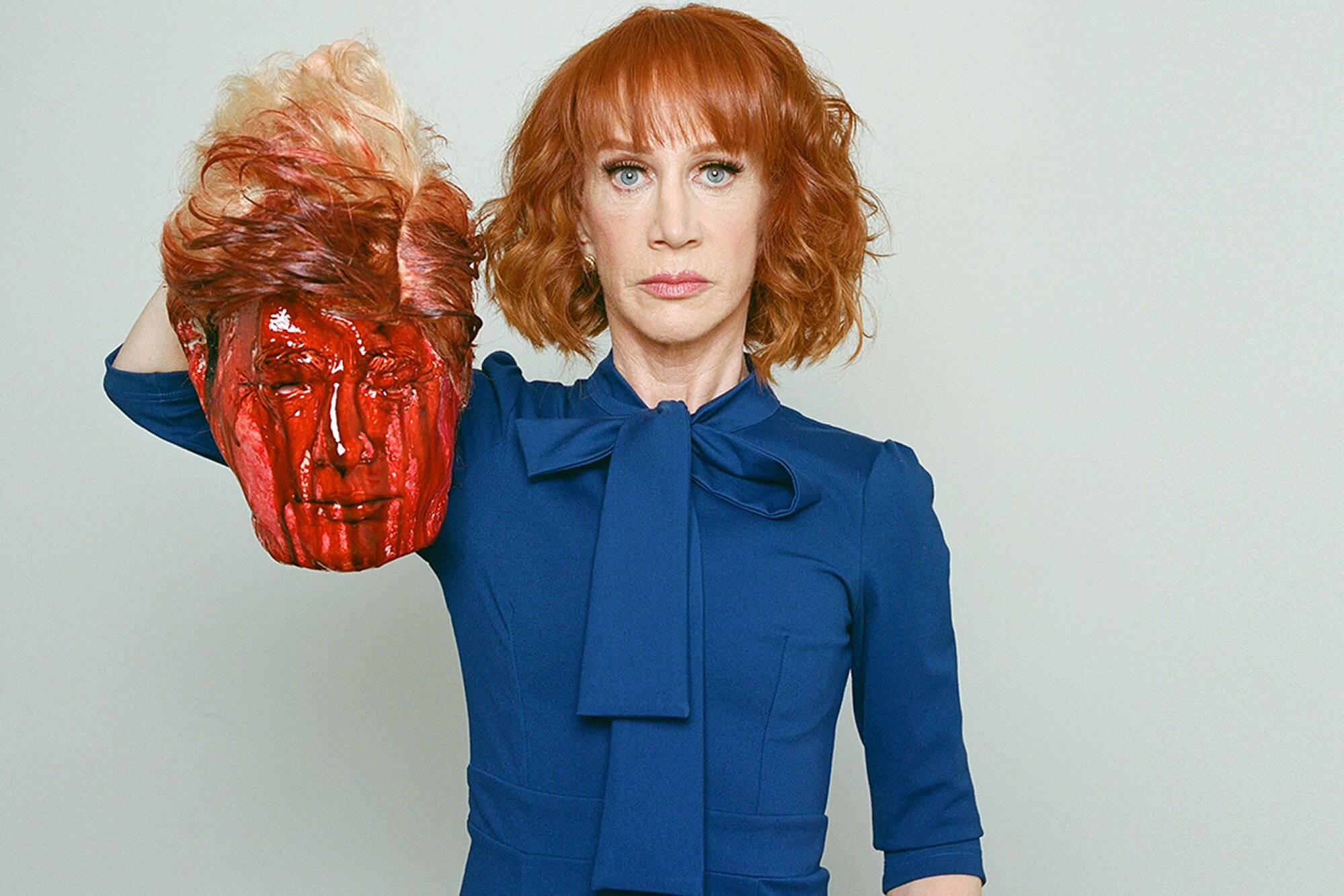 I am willing to defend all the right to express all sorts of speech I would never express myself. That's because I respect our free speech protections. Perhaps you don't? Not everybody does.

Your devil's advocate act got tired a long time ago.

Yeah, a lot of political partisans find the Constitution to be inconvenient. I can imagine that it is tiring to hear about the rights of people who disagree with you. It makes it harder to get the government to shut them up for you.

Your comments are bizarre. By the way, Kathy Griffin suffered a great deal of punishment for what she did. Fired?

Kathy Griffin fired by CNN over that photo of her holding a bloody Trump head.

Your comments are bizarre.

If you find my comments bizarre, then I think you really need to educate yourself on the right of free speech in America, and its history.

And I would defend her right to do what she did. However, she worked for a private company and they can do what they like. I don't approve of their need to protect their image by endorsing censorship, but I must acknowledge that they were within their rights.

There may have been numerous people who work for non private organizations that have been fired for what they put on Facebook. This isnt even a real debate, it is just you wanting to pontificate.

This isnt even a real debate

No it isn't. It's hard when one person won't engage honestly and fairly. I never said I approved of her post and I think I have indicated that I actually don't, but you keep dishonestly asserting that I do. Do you want to debate that she might have rights? Or that the First Amendment has value? It seems to me that you're just pissed because I suggested that a person you don't like might have rights.