It's becoming clear that as heinous as the Capitol Hill riot looked in real time, on live TV and in our social feeds, it was even more violent, more treacherous, and Trump's behavior was even more disturbing.

The full truth of what happened is just beginning to be revealed.  We can expect to learn a lot more over the next days and weeks.

(CNN)News outlets are publishing more and more videos, photos and testimonials from Wednesday's pro-Trump riot on Capitol Hill. And it's becoming clear that as heinous as the attack looked in real time, on live TV and in our social feeds, it was even worse than we knew then.

On Wednesday we witnessed history through a handful of soda straws, to borrow a metaphor from the 2003 Iraq invasion. Journalists bravely covered the riot in real time and deserve enormous credit for doing so. But in the fog of chaos, it was impossible to see the full picture as it was happening. The public didn't find out that a US Capitol Police officer was gravely wounded until Thursday, for example. Officer Brian D. Sicknick died Thursday night, and federal prosecutors have now opened a homicide investigation.

As is the case with many traumatic events, it has taken some time for the reality to sink in. "I was in the crowd and didn't realise how bad it was until a day or two after," reporter Richard Hall of The Independent, a British newspaper, tweeted Saturday.

Reconstructions of the events and follow-up reporting by news organizations are bringing it into focus.

CNN aired a horrifying video Friday night, first published by investigative outlet Status Coup, showing a police officer pinned between a door and the mob. The officer screamed in agony.

There are all sorts of practical reasons why these scenes weren't shown live on Wednesday. Inside the Capitol, many correspondents were locked down and shepherded to secure locations along with lawmakers.

On the outside, some reporters had a hard time getting news out because wireless towers were overwhelmed. Additionally, some news crews were threatened by groups of Trump supporters, making the working conditions even more difficult.

Some of the TV live shots on Wednesday afternoon were from a distance, by necessity, and the most important live cameras of all — inside the House and Senate chambers — were turned off by the respective legislative bodies.

Think back to your own processing of Wednesday's events: A handful of chaotic videos on social media stunned the world, and immediately confirmed that the police had lost control. But the views were limited and time-delayed. Information came in bit by bit in ways that harkened back to 9/11.

There was so much news that it was hard to process: Reports of explosive devices, an armed standoff, a shooting and evacuations. Viewers were able to see some of it with their own eyes, but most of the information was secondhand, from tweets and phone calls and emailed dispatches from congressional reporters, many of them locked in the Capitol..

Only later did it become clear that lawmakers feared for their lives; that some of the attackers were hunting for congressional leaders; that there could have been a massacre.

On Wednesday "the images broadcast were largely not the most horrifying ones of the day," MSNBC's Chris Hayes said Friday night. "Much of what we saw — silly costumes, people taking selfies, grabbing the speaker's lectern — looked like of kind a group that might even attend a Trump boat parade. But there was something way, way darker, more violent, more sinister, and more organized happening in that Capitol on Wednesday. And it's time we see it clearly."

On the internet, Hayes' segment was titled "Must-see new video shows Capitol riot was way worse than we thought."

He pointed out that "it is entirely possible that there were people in that crowd, looking to apprehend, possibly harm, and possibly murder the leaders of the political class that the President, and people like Mo Brooks, and even to a certain extent Ted Cruz and Josh Hawley, have told them have betrayed them."

It understandably took some time for journalists to digest what they'd witnessed and ingest their video from the Capitol. The Washington Post, for instance, produced a video titled "What it was like to report from a Capitol under siege."

Progressive writer Mike Konczal, a director at the Roosevelt Institute, tweeted on Friday, "That the occupation of the Capitol was far more violent, and had the capacity for far more violence, than I understood while it was happening is the most jarring thing I've learned about the putsch over the subsequent days. It's terrifying."

As for the president and his behavior, CNN's Sunlen Serfaty, Devan Cole and Alex Rogers revealed on Friday that Trump "tried to call senators" and pressure them to overturn the election even as the riot was raging.

Something else that was even worse than we knew at the time: The attacks against members of the media. Erin Schaff of The New York Times later described what happened when the mob saw her Times ID. "They threw me to the floor, trying to take my cameras. I started screaming for help as loudly as I could," she said. "No one came. People just watched. At this point, I thought I could be killed and no one would stop them. They ripped one of my cameras away from me, broke a lens on the other and ran away." She fled and found a place to hide.

Having a full accounting of what happened, and how, is vital. After I wrote about this subject in Friday night's "Reliable Sources" newsletter, Democratic Rep. Ted Lieu of California responded on Twitter, "We have already learned and will continue to learn that what happened on Jan 6, Insurrection Day, is even worse than we knew." Lieu then called for action: "Congress' response cannot simply be giving speeches with gravitas. Unless Trump resigns or is removed through the 25th Amendment, we must impeach."

The true extent of the horror and violence that occurred in our nation's Capitol on Wednesday is becoming clearer.  All those responsible, including organizers and participants, must be held accountable.

If not responded to, for the severity of that which was intended, how can it not be seen as acceptable to act as such, thus not disincentivising our next inevitable uprising against our legally elected government officials...? As severe a penalty as legally possibly MUST be pursued and implemented, as there must be a message attached so that there is NO mistaking, as to the what the severity of those LYING about the TRUTH and attempting to undermine our Countries election process can do. To incite the gullible to initiate sedition via civil acts of domestic terrorism is obscene. As what would we do if this mob had consisted of mostly dark skin Muslims...banned them from DC or SHOT THEM AS THEY APPROACHED? But didn't even take it seriously cause mostly White like Trump and the Conservative, hypocrisy, for all the whirled to spin, again and again,, cause causes take upon new meanings, when exposed with full context, while hidden is that which has kept the unknowing from learning. IMHO i believe it should be required for the LYING POLS to divulge the DAMN TRUTH, that our election was FAIR AND LEGAL , and Trump and others LIED as to a 'stolen election' that NONE can PROVE. There needs to be many to pay a price for this was the worse event since our Civil War, again, imho.

CNN aired a horrifying video Friday night, first published by investigative outlet Status Coup, showing a police officer pinned between a door and the mob. The officer screamed in agony.

That was hard to watch.  But I think we needed to see it.

I saw that video today, it was horrific. He was very lucky to escape with his life.

Sometime Wednesday night, one of the news outlets , I dont remember which, played a video that showed considerably more hand to hand fighting between the insurrectionists and the police than we were originally led to believe. Also scenes of doors being broke through with makeshift battering rams. I knew then that the chaos inside there was more serious and extensive than was originally portrayed. I also listened to a podcast the next day from the NYT where they had descriptions of what happened inside from some of their reporters who got inside. That was also informative.

I saw a video of a guy with a crowbar smashing through a door.  I hope he is identified and arrested.  These people came prepared to cause some very serious trouble.

I believe something like 1000 "protesters" entered the building and some were in there for multiple hours. I imagine there is a lot of damage. 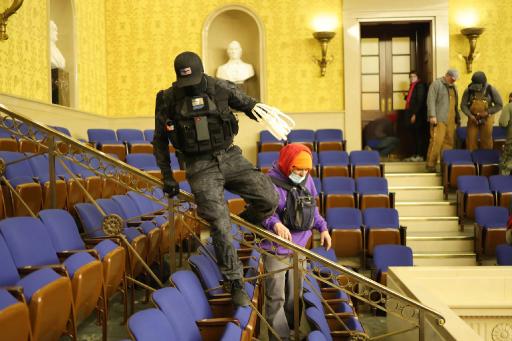 Why is this guy carrying wrist restraints?

What - you don’t keep a few pairs of wrist restraints on you at all times?  You never know when you might need to make a citizen’s arrest.  This gentleman was just prepared.

Whoever he is, the FBI is looking for him.

There was more than one individual with zip ties.   One has been identified as a retired Air Force lieutenant colonel who claims he happened to just pick them up after finding them on the floor.  He was one of the people seen either breaking into or exiting Pelosi's office suite, or both.  Another rioter carrying zip ties has also been identified and his name has been reported to the FBI.

"The Trump riot even worse than we think?"

The ( worse ) part of all of this is the fact that this many people are willing to place themselves in such risk---even danger---for a man that existed on the grift for his whole life.

In other words, think of Belarus-- except in reverse.

One of the rioters was a retired Air Force LT. Colonel.

Read the link and listen to his nonsense trying to excuse himself.

Officer standards in the Air Force are miserable.