The Mystery of the World's Loneliest Penguins | WIRED

A small group of king penguins have appeared on Martillo Island in Argentina. How they got there, and whether they will stay, is unknown.

A small group of king penguins have appeared on Martillo Island in Argentina. How they got there, and whether they will stay, is unknown. 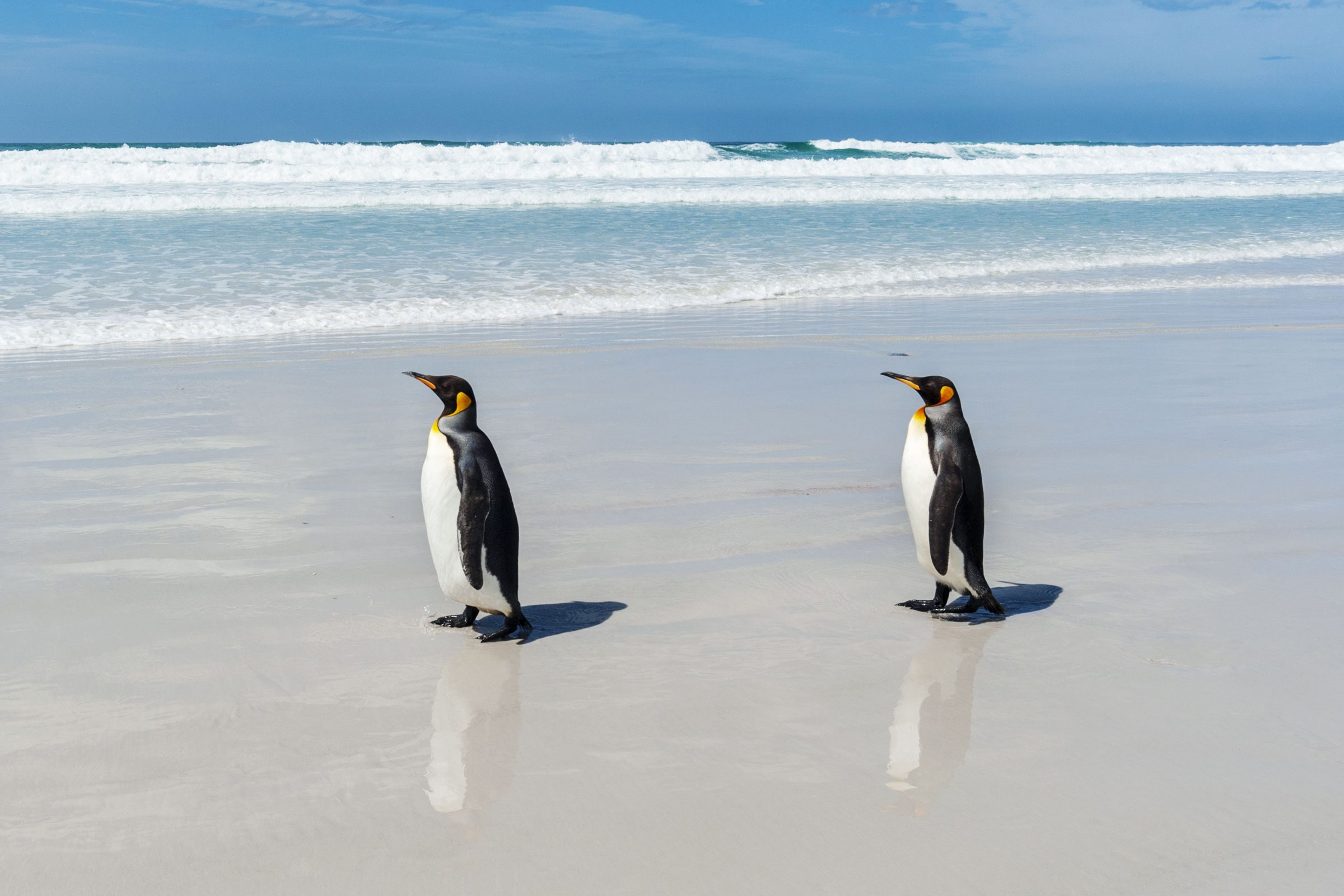 Some years ago, researchers in Ushuaia, the southernmost city of Argentina, observed some unexpected winter visitors. Martillo Island, a speck of land in the Beagle Channel, regularly attracts tourist boats owing to its photogenic colonies of magellanic and gentoo penguins. Visit today, however, and you may just be lucky enough to spot an outsider: a king penguin, staring out across the channel from the island's pebble beach, head and shoulders taller than the gentoos and about twice the size of the magellanics.

A handful of king penguins have been caught by camera traps on the islands, often hanging out in the gentoo nesting grounds. King penguins can be found elsewhere in Patagonia, but hadn't been spotted on this island before. How they got there, where they came from, or even how many there are, is a mystery. "We don't know anything about king penguins at Martillo Island," says Sami Dodino, a penguinologist at Argentinian scientific institute CADIC.

Ushuaia, right at the southern tip of Argentina, is known fondly as "The End of the World." Travel around 1,000 km south and the next place you reach is Antarctica (although not before passing through another settlement on the Chilean side of the Beagle Channel, Puerto Williams—"Beyond the End of the World"). Martillo Island has been home to magellanic penguins, small birds which are unusual in that they dig burrows to nest in, since the 1970s, and welcomed gentoos, a larger species which collects rocks to build nests on the ground, in the 1990s. King penguins look more like the kind you probably first picture when you imagine a penguin. The second-largest species after the emperor penguin, they have distinctive orange "cheeks" and yellow-orange plumage at the top of their chest. The adults are elegant in stature, the chicks endearingly awkward in their rotund brown fuzziness.

Whether these few king penguins arrived at Martillo Island by accident or design is unknown. "Probably it's an accident," says CADIC researcher Andrea Raya Rey. "They were wandering around the ocean looking for food." When it is time to moult, king penguins head ashore—usually back to their original colony—before returning to the ocean. But in this case, they may have looked around, seen the other species of penguins on Martillo Island, and landed there to change their feathers instead. "King penguins are really long-distance foragers, so they expand their range," Raya Rey says.

The researchers know from genetic testing that the gentoo colony on Martillo Island originated from individuals that came from the Falkland Islands; there are now around 30 pairs. The same could be true of the king penguin visitors. Alternatively, they may have come from Inutil Bay, a few hundred kilometers north in Chile; Staten Island over to the east; or the island of South Georgia, which has a large king penguin colony, out in the Atlantic.

When the king penguins were first observed at Martillo Island, the researchers believe they may have been juveniles, as they didn't appear to try to breed. But in the past few years, one pair has managed to lay an egg. Last year, for the first time, they successfully hatched a chick.

Sadly the excitement didn't last long, as the chick died a few weeks later. "We believe maybe that was because we had a hot summer for Ushuaia," Dodino says. Raya Rey adds that the chick would have probably died come winter in any case, as the parents were likely inexperienced and at a disadvantage owing to their small group. Usually, king penguin chicks gather together in winter for warmth while their parents hunt for food; this doesn't work with just one chick. "They are trying to start a new colony, but it's very difficult for just a few individuals," she says.

It's hard to know what will happen next with the Martillo Island king penguins. The researchers don't want to do anything that may disturb the few king penguins that are there, so they are limited to studying footage from camera traps. But this is not detailed enough to reveal how old the penguins are, what sex they are, or even how many there are, as it is not possible to tell if the same penguins keep coming back or if they are different individuals. "We have a lot of questions without answers," Dodino says.

In the meantime, more work is being done with the gentoo and magellanic populations. Raya Rey and Dodino conduct surveys to count the number of penguins in the colony; collect blood and feather samples, which give information on the penguins' diets; and put GPS transponders on some penguins to see where they fish. One paper coauthored by Raya Rey found that the gentoo and magellanic penguins on Martillo Island forage in different zones, with gentoo preferring to catch fish in open water and magellanic traveling across a greater area and going after sprat, lobster, and krill close to the seafloor. This, she says, could be a sign that the penguin species, which are both quite adaptable in their behavior, are segregating the area so as to avoid competition.

But studying any of the penguins at Martillo Island in the past year has been challenging. The researchers have not been able to visit due to the pandemic, save for one trip to replace the batteries and memory cards in their camera traps. "I think this year we are going to lose the season, in terms of research," Dodino says—although, she adds, the penguins may be happier that way.

Studying penguins, at Martillo Island and elsewhere, can tell us about more than just these particular seabirds. "Penguins in general are sentinels of the marine environment," Raya Rey says. "By studying the penguins, I could understand the marine environment for the better conservation not only of the species, but of the habitat." Seeing how penguins adapt their behavior could highlight some of the consequences of the climate crisis and other environmental challenges. "By studying the penguins, you could have an early alert of what is happening in the ocean."

During my time at McMurdo Station, Antarctica I had the opportunity to see and photograph many Emperor and Adelie penguins. Those were the only two varieties that were down that far South. Also, the Emperor penguing is the only species of such that actually the winter on the continent of Antarctica.

Also, the Emperor penguing is the only species of such that actually the winter on the continent of Antarctica.

Which never ceases to amaze me. We've all seen documentaries of Emperors just standing there on the windswept ice. Just incredible that they can live under those conditions. It's like my brain has trouble believing it. You see thousands of them just standing there. Surely one has to be thinking "Why are we doing this?"

Surely one has to be thinking "Why are we doing this?"

They don't. They are in the business of making babies.

I am jealous. Ed. I love penguins but of the many animals I have worked with, I never worked with them.