North Texas pitcher Hope Trautwein strikes out every batter she faces in seven innings of a win over Arkansas State Pine Bluff.

Twenty-one times, Arkansas State Pine Bluff batters stepped up to the plate to face Hope Trautwein's pitches. Twenty-one times, they quickly trudged back to the dugout, victims of a truly perfect "perfect game" in which the North Texas pitcher struck out each of the batters she faced. 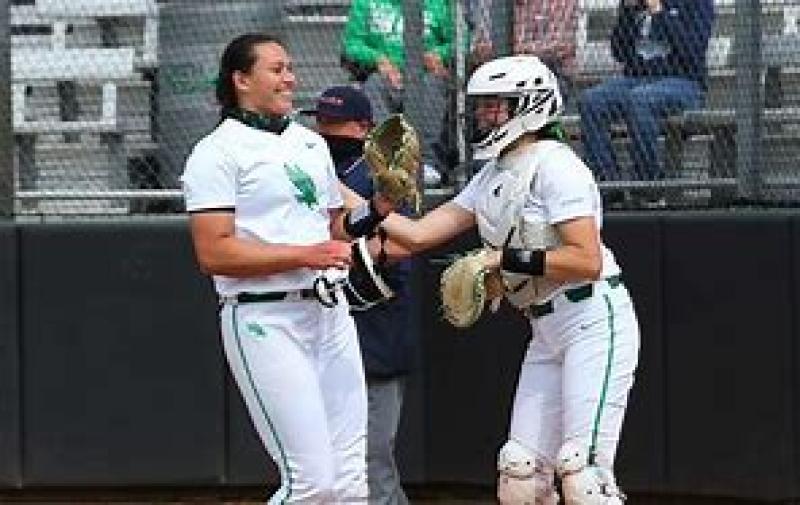 Twenty-one times, Arkansas State Pine Bluff batters stepped up to the plate to face Hope Trautwein's pitches. Twenty-one times, they quickly trudged back to the dugout, victims of a truly perfect "perfect game" in which the North Texas pitcher struck out each of the batters she faced.

Trautwein topped her two previous no-hitters with a bit of historic flair, pitching what is believed to be the first perfect seven-inning game in NCAA Division I history with every out being a strikeout. According to NCAA records, two other pitchers have had 21-strikeout seven-inning games, but neither was a perfect game. Alabama's Alexis Osorio fanned 21 Fordham hitters in 2018 and California's Michele Granger did the same against Creighton in 1991.

In the moment, Trautwein wasn't really aware of what she was accomplishing, partly because she had been there before. A right-hander from Pflugerville, Texas, she struck out 21 hitters for the Denton, Texas, school on Feb. 13 in her first start of the season, but gave up five hits and two runs in a 6-2 victory over Southeastern Louisiana.

"I actually didn't really realize what was happening, what kind of game this would become," Trautwein said in an interview with The Washington Post from Pine Bluff. "At the end of the game, I was just like, 'Phew, OK, another win, on to another game' because we had a doubleheader.

"Tate (Hawkins, a communications assistant in the athletics department) came over and said, 'Do you realize what you just did?' I was like, 'Uh, a no-hitter?' And he said, 'No, a perfect game and every out was a strikeout.' I was like, 'Oh, my gosh.' He was like, 'You realize no one's ever done that ever.' I feel like the best games, I hardly remember and that's a good thing."

Reaction was immediate, and she even got a social media hashtag, #HopeIsDope.

"It's crazy, my phone is blowing up 24/7," she said. "I have people texting me and congratulating me. It's huge to see how softball is affecting the sports world right now because softball is one of the fastest growing women's sports. Personally I think that everyone should get to know softball and how fun it is."

Her parents had planned to travel from their Pflugerville, Texas, home near Austin for the series in Pine Bluff, but weather caused games to be postponed and they couldn't get away. They were able to catch her razzle-dazzle on ESPN.

"My family got to see that and they could see the hard work and dedication finally paying off," Trautwein said. "It really amazing to see softball reaching the front page of people's news and the texts. It's just really awesome for my family to get to see."

If Trautwein has a secret weapon, she says it's an obvious one. "I have a great pitching coach in Jamie Allred and a catcher in Ashlyn Walker who works really well with my pitches. She's able to work around the corners and help me out a little bit."

Trautwein may have been blissfully unaware of her feat, but her coach, Rodney DeLong, and Allred felt the pressure growing with each strikeout in what turned out to be a 3-0 win that was the first perfect game in North Texas softball history.

"We were aware that the no-hitter was intact and obviously she had struck out every batter, we just didn't know it had ever been done," Coach Rodney DeLong told The Post. "Our pitching coach was she was like on the edge of her seat trying to help her get it done. She was very, very aware of the (developing) situation so it kind of kept her on edge the whole time. It was fun to watch because she was really rooting for Hope. They really shared that moment together and it was pretty neat."

The Mean Green improved to 18-9 with a 5-2 win in the second game of the Sunday doubleheader and faces Arkansas Pine Bluff again Monday afternoon. Trautwein, who has 581 career strikeouts (the school record is Ashley Kirk's 712, from 2011-14,) previously had pitched two no-hitters, against Mississippi Valley State in 2018 and Sam Houston State in 2019. She previously had two 21-strikeout games, becoming only the third pitcher in Division I history with 21 strikeouts in the game against Southeastern Louisiana.

Because of the coronavirus pandemic, Trautwein, who graduated with an accounting degree in December, has another year of eligibility while she studies toward an MBA degree.

"One thing about Hope, she's the hardest worker on our team, brings energy to everything we do," DeLong said. "Even when we're taking batting practice and all the pitchers are shagging balls, she's flying around catching balls. She's just locked into whatever it is she has to do. I think her ability to stay focused, her attention span and all that stuff is just how she works and what goes into her game."

Remember, this is Division I college softball.  A  tremendous achievement for Hope Trautwein.