Florida GOP operatives 'alarmed' that they may accidentally suppress their own voters: report - Raw Story - Celebrating 17 Years of Independent Journalism

Florida recently became the latest state to pass a sweeping voter suppression bill, but the Washington Post reports that some Republican operatives in the state are expressing "alarm" they could end up suppressing their own voters.The Post's report notes that Florida Republicans recently adopted new...

Florida recently became the latest state to pass a sweeping voter suppression bill, but the Washington Post reports that some Republican operatives in the state are expressing "alarm" they could end up suppressing their own voters.

The Post's report notes that Florida Republicans recently adopted new restrictions on mail-in voting despite the fact that they've used mail-in voting for decades to rack up votes from conservative seniors living in the state.

"Not only are GOP lawmakers reversing statutes that their own predecessors put in place, but they are also curtailing a practice that millions of state Republicans use, despite former president Donald Trump's relentless and baseless claims that it invites fraud," the Post reports.

One Florida GOP operative was explicit in blaming Trump for the state's decision to undermine its long-standing voting practices.

"Donald Trump attempted to ruin a perfectly safe and trusted method of voting," they said. "The main law that we pass when we pass election bills in Florida is the law of unintended consequences."

Ion Sancho, a former election supervisor for Leon County, similarly told the Post that the GOP's sharp shift on mail-in voting is due entirely to Trump's lies about mail-in ballots costing him the 2020 election -- and that any efforts to expand access to voting by mail came "before their leader's attack on mail balloting."

The damn gop is suppressing republican votes, too!

Democrats need a full court press in getting voters to the polls during the mid-terms.

We had an excellent vote by mail system until Trump/Desantis screwed it up.

I hope that it comes back to bite the Republicans in the ass.

If it makes you feel any better our dipshit GOP in arizona is trying to ruin our perfectly good mail in ballot system. It’s funny cuz they can’t even justify why they are trying to change it.

Be careful what you legislate for, Friends 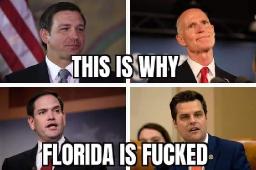