Is Joe speaking with the dead now?

© Patrick Semansky/AP   President Joe Biden speaks about the April jobs report in the East Room of the White House, Friday, May 7, 2021, in Washington. (AP Photo/Patrick Semansky)

The American Jobs Plan, which you can read about   here , would spend roughly $2 trillion on infrastructure projects and other initiatives. Biden has proposed to pay for the spending by increasing the statutory corporate tax rate from 21% to 28% and to make a   variety of other tax changes , including a major increase in tax enforcement against corporations.

"And, by the way, you saw -- you know, the -- the last five leaders of the Fed coming out and saying -- what'd they say? They said, 'Biden's plan is going to grow the economy,'" Biden said in his Wednesday speech at the White House.

Facts First :   Biden's claim is false. As a White House official acknowledged to CNN when we sought comment on Monday, Biden was inaccurately referring to an opinion   article   published in the Washington Post that day by five former leaders of the Internal Revenue Service, not five former leaders of the Federal Reserve; only three past chairs of the Federal Reserve are even alive. The former IRS commissioners did not say anything about how Biden's plan would affect economic growth. Rather, they said Biden's proposals -- including a   well-funded effort to crack down on the non-payment of taxes owed   -- would make the tax administration system "far fairer and more effective" and "produce a great deal of revenue by reducing the enormous gap between taxes legally owed and taxes actually paid."

The most recent past leader of the Fed, Janet Yellen, is now Biden's Treasury Secretary. Her predecessor, Ben Bernanke, now a   distinguished fellow at the Brookings Institution   think tank, said in an email to CNN on Monday: "I have not made any public remarks on the infrastructure plan, so far as I can recall." The other living past Fed chair, Alan Greenspan, has also not weighed in on the plan; he could not immediately be reached for comment on Monday.

An exaggeration on the pay gap between CEOs and workers

Facts First :   Biden's "456 times" figure was wrong based on the most recent available data, as the White House official acknowledged to CNN on Monday -- though he was broadly correct that the gap between CEO pay and worker pay has skyrocketed over time. The Economic Policy Institute, a progressive think tank,   found   that in 2019, CEOs of the 350 US companies with the largest sales earned 320 times more than the typical worker at those companies, not 456 times. Biden was in the ballpark on the situation in decades past; the same think tank found that there was a 21-to-1 ratio between CEO and worker pay in 1965 and about a 31-to-1 ratio in 1978.

As the White House official noted on Monday, Biden accurately cited the Economic Policy Institute figure in his late-April address to Congress,   saying then : "According to one study, CEOs make 320 times what the average worker in their corporation makes. It used to be in the -- below a hundred."

A misleading jobs claim is back

On May 2, we   pointed out   that, after early-April fact checks from   CNN   and others, Biden's team had stopped wrongly claiming or suggesting that economic firm Moody's Analytics found that the American Jobs Plan proposal would create 19 million jobs.

Well, Biden made a version of the claim last week. In a slightly different form than the original, but that new form was misleading too -- and Biden added an additional inaccuracy this time.

In his Thursday   speech   in Louisiana, Biden said, "All the economists, including the liberal as well as conservative think tanks, point out what we'll create when we pass this Jobs Plan -- we'll create up to 16 million good-paying jobs." And in the White House speech the day prior, Biden said, "You have Moody's talking about increasing it up to -- I don't know what the most recent one is -- 16 million new jobs."

Biden was more careful in his address to Congress in April. He   said   in that speech that the plan will create "millions" of jobs.

It is obviously not true that "all the economists, including the liberal as well as conservative think tanks," have come to the same conclusion on the potential impact of the American Jobs Plan.

One example of the non-consensus: Michael Strain, director of economic policy studies at the American Enterprise Institute, a conservative think tank, told CNN on Monday that he thinks Biden's plan will not produce a net result of   any   additional jobs

Strain said it's good that Biden's plan aims to make long-term infrastructure improvements over a period of years rather than trying to give the economy a quick jolt through immediate spending on so-called "shovel-ready" projects. But Strain said that, because the economy is already likely to be at full employment over this extended time horizon, the number of additional jobs the Biden plan will create "is zero." The plan, Strain argued, is likely to merely shift jobs toward industries "favored by the infrastructure plan," such as clean energy, while shifting them away from other industries.

There's no need here to interrogate Strain's opinions. The point is that, clearly, not everyone across the political spectrum and economic spectrum shares the Moody's assessment that the plan will produce 2.7 million jobs by the end of 2030 -- let alone Biden's suggestion that it will produce up to 16 million jobs.

Another   analysis , by the firm S&P Global, also came to a different conclusion than Moody's. S&P did not look at the particulars of Biden's plan, but it estimated that a hypothetical $2.1 trillion in infrastructure spending -- more than Biden is proposing, whatever   definition   of "infrastructure" you use -- would result in a net 713,000 additional jobs by 2029. (The analysis found that there would be 2.3 million additional jobs by 2024 as infrastructure projects were completed, but that the jobs impact of the plan would decline later in the decade.)

Even CNN is getting tired of the Biden "misspoke" lines.   The man is certainly in trouble when CNN is calling him on his BS.

As a White House official acknowledged to CNN when we sought comment on Monday...

I wonder... will that WH official be voted off the Democrat Island? /s

I wonder... will that WH official be voted off the Democrat Island? /s

I wonder...  when will those WH officials decide that they're too embarrassed by Biden to defend him any longer?

As long as others keep comparing ol' Joe with our previously nude emperor, I think never.

You speak of our senior statesman, President Joseph Biden, as if he had not honorably served the nation as a US Senator and two term Vice President and he was not enjoying immense popularity. As if you consider him an enemy... 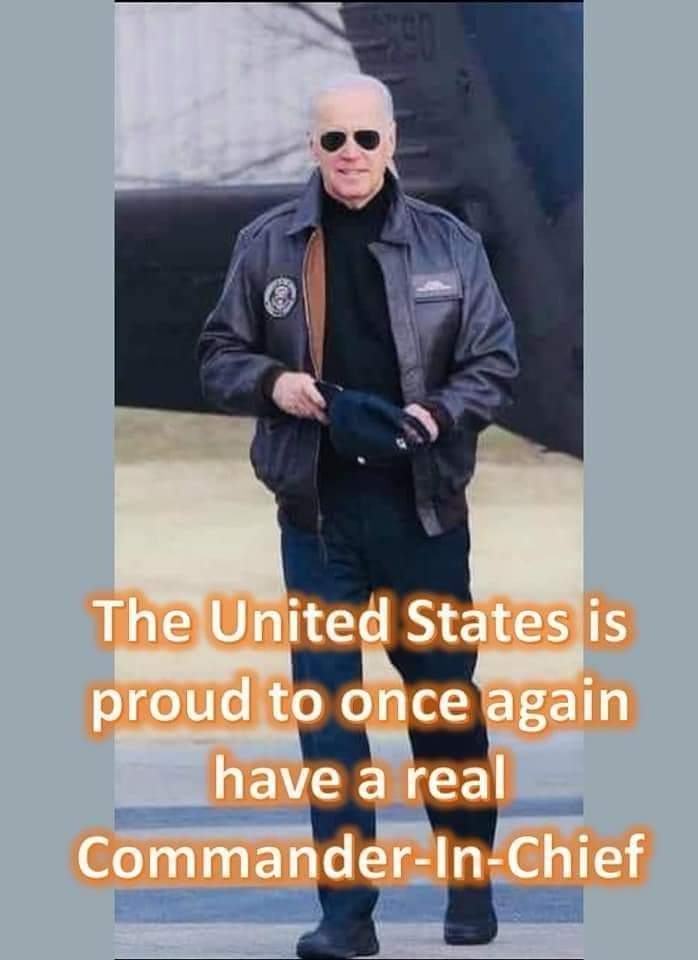 You speak of our senior statesman, President Joseph Biden, as if he had not honorably served the nation as a US Senator and two term Vice President and he was not enjoying immense popularity. As if you consider him an enemy...

I have to admit that he served as a US Senator and Vice President.   Honorably is debatable.  If you consider being responsible for one of the worst bills that ever happened, the Violent Crime Control and Law Enforcement Act of 1994 which was responsible for putting more Black Americans behind bars than any other legislation, yeah, he did a bang up job.

He's enjoying "immense popularity" because the administration is buying that popularity with tax money being tossed around like a drunk in a whore house.

He's not an enemy.  He's a senior citizen suffering elder abuse that the hands of the minions that others have picked to control him.

President Biden has absolutely nothing to be embarrassed about.

It does not alter the fact that the experts agree Biden's economic plan will grow the economy which is the point that remains the pertinent fact of the matter...

All they have is these petty 'mis-speakings' while accepting over 30,000 of trumpturd lies.

Rhat does not alter the fact that the experts agree that Biden's economic plan will grow the economy. That was the point and that remains the pertinent fact of the matter...

The Biden "job plan" will create a staggering 2.7 million new jobs in TEN YEARS.  That's about 270,000 jobs per year at a cost of TWO TRILLION THREE HUNDRED BILLION DOLLARS.

Do you want me to do the math for you or can you do it yourself?

No, I want to know your plan to rebuild our aging infrastructure and put Americans back to work at good paying jobs. So far as the American people know the gop has no good plans.

No, I want to know your plan to rebuild our aging infrastructure and put Americans to work at good paying jobs.

Can't do the math?

As to what I would do, here's Joe's plan:

The proposal calls for more than $2 trillion to rebuild the nation's crumbling infrastructure including roads, bridges and airports, as well as spending on what the administration calls "care" infrastructure a focus on long-term care for the elderly and disabled:

That's fine.  Bridges, tunnels, roads, airports, but WHY do you or I need to help anyone buy an electric vehicle?  (**I already have one on order for my wife when we return to the states this summer.)

And just what improvements will that be that are not encompassed in the above roads, bridges, etc.?

That's fine to a point.  If it's a loan to the serving municipality.

Is the US Government going to be an ISP now?  Broadband is a private endeavor by business.   Other people have paid to have service delivered to them, what makes those lacking special?

Since when is that infrastructure?

What have they done with the hundreds of billions already received?

In other words buying union workers votes.  Nothing more.

R&D for what exactly?  We've already had studies on the sex lives of tsetse flies and shrimp on treadmills I believe.

And what will the US Government be manufacturing?  Or will the funds be for loans to private corporations?

Excuse me, but that's what schools are actually for.  To educate our children and prepare them for the jobs they will be taking on graduation.

the gop has no good plans

No plans at all.

No plans at all.

Here's some reading material you might enjoy, although I doubt it.

I'd love to stay and banter with some, but it's time to shut down for the night.

I'll be back tomorrow to open it up if I'm able.