About those voters who left the GOP this year? Things have now normalized. - The Washington Post

community » Discussions » Category » News & Politics » Discussion » About those voters who left the GOP this year? Things have now normalized. - The Washington Post

It was a change from the last two post-presidential periods, but a somewhat short-lived one.

In the immediate aftermath of the Jan. 6 U.S. Capitol riot, some news organizations and pundits jumped onto the convenient narrative that large numbers of registered Republicans were suddenly leaving the party. But as others pointed out at the time, it was still too early to draw definitive conclusions.

It turned out that the hesitancy was well founded. As more states published updated voter registration numbers, it became apparent that the predicted flood of voters abandoning the GOP was, at best, no morethan a modest stream.

Although reports of the death of the Republican Party were greatly exaggerated (or, really, entirely unfounded), it's true that the number of Republicans deciding to change their party affiliation was greater than normal — at least briefly. It's possible they were spurred on by some combination of Donald Trump's loss, attempted subversion of the 2020 election and some GOP members' support for the impeachment and removal of the former president.

But now, four months after the events of Jan. 6 and three months after Trump's second impeachment trial, the number of people changing their party affiliation in swing states has normalized, with relatively little overall shift.

Below is a look at the trends in some key areas.

North Carolina is one of the few swing states that remained in Trump's column during the 2020 election. There, more than 22,000 Republicans left the party in the first four months of 2021. This may sound like a lot, but it's important to remember that in the same period, nearly 9,000 people also joined the GOP. Also, the party in North Carolina has nearly 2.2 million members, so as a percentage of the total membership, the decrease was only a bit more than half a percentage point.

It's also important to remember that party affiliation is not the same as presidential vote preference. Especially in a state like North Carolina, where registered Democrats still outnumber registered Republicans, many people probably vote for the opposite party with which they are registered. It's quite possible that many of the people who have left the GOP since January didn't vote for Trump in the first place and simply used this as an opportunity to have their registration reflect their preference.

The initial rush of people changing their registration in the state has definitely subsided. In January, it was still more than 10,000 people who changed their registration from Republican to either Democratic, Libertarian, Green, Constitution Party or unaffiliated. By February, the number of switchers was down to 6,300. In March, 3,200, and in April the turnover was below 2,500.

These more recent numbers are a lot more in line with "normal" churn rates for parties. For example, in the first quarter of 2013 (we use that as a baseline since it's the year after a presidential election), an average of 1,200 Democrats and 900 Republicans changed their party registration. In 2017, the respective numbers were 1,600 and 1,000.

Usually people change their party registration before primaries or the general election, and party registration changes in the early months of the year are not particularly common. In addition, we can see above that in North Carolina, it's usually Democrats and not Republicans who are un-registering from their party — evidence that what happened earlier this year was unusual.

The data tells a similar story in Pennsylvania, one of the decisive states of the 2020 election, which President Biden won by about 80,000 votes.

Since January, more than 33,500 people have left the Republican Party in that state. This is already more than the 31,500 people who left in 2017 or the approximately 19,000 who changed their registration from Republican in 2013. Again, this is evidence that voter registration changes earlier this year were uncommon for a non-election year.

But once again, in the grand scheme of things, the number of people leaving the GOP is small. In the same period, 16,000 people joined the party, so the actual rate at which the Republican Party shrank is around 0.5 percent. (There are nearly 3.5 million registered Republicans in Pennsylvania.)

As in North Carolina, the initial rush of voter registration changes in January and February has been reduced to the normal and expected churn. In the second week of the year, more than 4,000 Republicans changed their registration, and until early mid-February, the average number of people leaving remained above 3,000 per week.

More recently, the numbers have settled at about 900 departures per week — a return to near normalcy. (It's not quite normal yet, since similar to North Carolina in every week of 2021, more Republicans have changed their party registration than Democrats. However, the differences are minimal.)

Finally, we can look at Maricopa County, the most populous county in Arizona, which contains 2.6 million of the 4.3 million registered voters in the state.

Between January and March, more than 14,500 Republicans changed their registration to a different party. While again this may sound like a lot, this constitutes only 1.6 percent of the party's membership, and in the same period more than 3,300 people joined the GOP.

When breaking down this data month by month, we can see that the vast majority — nearly 9,000 of those changes — happened in January, nearly 3,600 of the changes in February and fewer than 2,300 in March. It seems that also in Maricopa County, the initial rush of registration changes has subsided.

So in all three areas, we can see that the initial months of this year saw a greater-than-usual membership turnover for the Republican Party. However, the most recent data out of swing states suggests that the initial wave was not a harbinger of things to come. Instead, it was quickly replaced by something amounting to the usual churn of party membership.

It is always best to get out of abusive relationships! 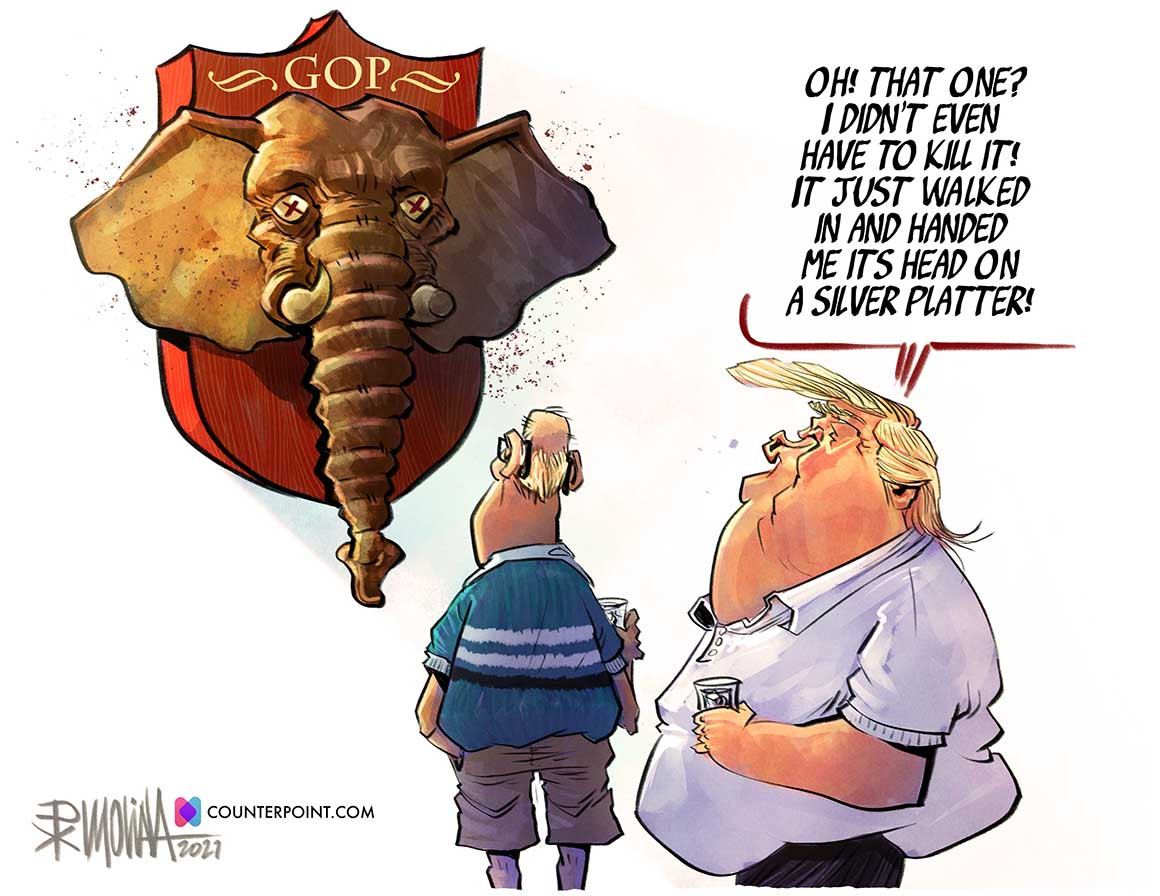 Senior Principal
3  Nerm_L    one month ago

Voters are walking away from both parties.

So once again, Democrats declared the GOP dead only to find out they were wrong.

When will the clowns learn?