By:   By Neil MacFarquhar and Edgar Sandoval

. . . will throw much of that regulation out the window, allowing virtually anyone over the age of 21 to carry a handgun, no permit required. 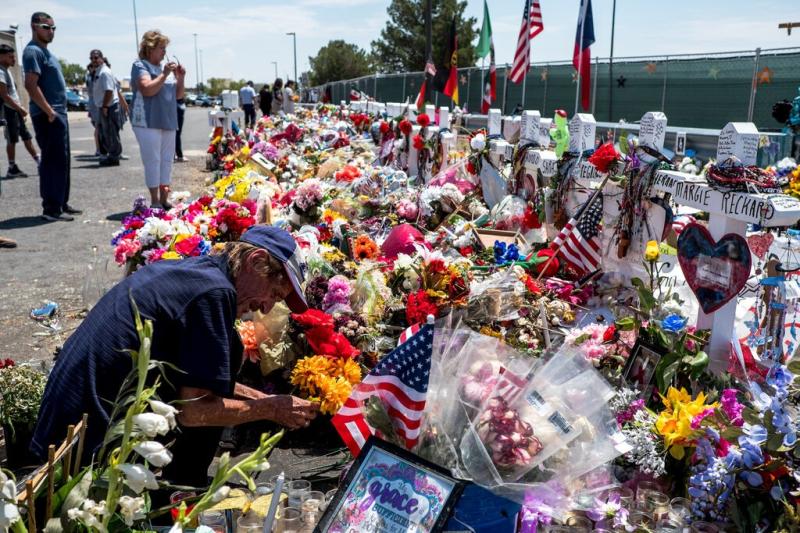 A memorial for the victims of a mass shooting at a Walmart in El Paso in 2019. Credit... Joel Angel Juarez for The New York Times

More than a million people in Texas have permits to carry handguns. People often head into grocery stores, barber shops, even college campuses carrying guns for protection. In 2019, when a man in a trench coat opened fire with a shotgun in a suburban church outside of Fort Worth, more than half a dozen people who had gathered for the service responded by drawing their own firearms.

Now, within days, Gov. Greg Abbott is expected to sign a wide-ranging law that will throw much of that regulation out the window, allowing virtually anyone over the age of 21 to carry a handgun, no permit required. The landmark bill would make Texas — which has three of the nation’s 10 biggest cities — the largest among 20 other states to adopt a “constitutional carry” law that basically eliminates most restrictions on the ability to carry handguns.

Handguns have long been a central component of violent crime in urban American, and Texas has three of the country’s largest cities, Houston, San Antonio and Dallas. The number of murders spiked in major Texas cities in 2020: There were more than 397 deaths in Houston, up from 289 the year before; Dallas had 245 deaths, up from 199; and Fort Worth saw deaths through November climb to 102 from 62, according to an independent tally of police statistics.

Critics, including some senior law enforcement officers, call the new legislation a dangerous retreat from gun control amid a recent surge in gun violence, particularly in a state with a long and painfully recent history of mass shootings.

The measure passed over the objections of numerous senior law enforcement officers who warned that removing restrictions on carrying handguns would impede their efforts to quell gun violence.

. . . will throw much of that regulation out the window, allowing virtually anyone over the age of 21 to carry a handgun, no permit required.
Of course if its inn Texas, it may not be a bad thing...Darwin's Law should operate...big-time!

And speaking of improving the gene pool-- isn't mostly solid Red states where most people refusento get the Covid vaccine?

Between that and these wonderful new gun laws...who knows how that will effect the population of the Red states?

The best and easiest way for the conservative billionaires and their right wing lackeys to get the guns away from their unhinged/rabid base is to flood the streets with weapons which will result in much unnecessary carnage.  Eventually the sane people will have enough of this crap and demand 'someone' do something.  Then the liberals will act for the good of the society and the country.  And when that happens the conservatives will once again scream at the top of their lungs-----"I told you so."

In all honesty.  Putin does not allow guns flooding his population.  And the right wing would love to have the same thing here except they don't have the guts to do it.

Whatever comes of this good, bad, or indifferent: Texas deserves every last piece of it!

Criminals and the criminally insane already carry or can easily obtain a gun.

They don't bother with getting permits, submitting to background checks, and simply ignore gun laws