Parliamentarian: Democrats only get one more chance to sidestep GOP this year

Senate Parliamentarian Elizabeth MacDonough has effectively ruled that only one more automatic budget reconciliation is permissible this year, dealing a blow to Democrats who previously thought they would have two more chances to sidestep Rep

MacDonough ruled that a revision to the 2021 budget resolution cannot be automatically discharged from the Senate Budget Committee, meaning Democrats would need at least one Republican on the 11-11 panel to vote with them.

The bombshell ruling effectively means Senate Majority Leader Charles SchumerChuck SchumerTop union unveils national town hall strategy to push Biden's jobs planLet's not put all our cars in the EV basketPelosi floats Democrat-led investigation of Jan. 6 as commission alternative MORE (D-N.Y.) will be able to use only one more reconciliation vehicle to pass Biden's key legislative priorities this year. He will not be able to divide up the $2.3 trillion American Jobs Plan and the $1.8 trillion American Families Plan, as well as Biden's calls to expand Medicare and lower the price of prescription drugs, into multiple reconciliation packages, as was envisioned only a few weeks ago.

Anything that Schumer wants to pass through the Senate with a simple-majority vote in 2021 will have to go into one budget reconciliation package.

Schumer would likely not be able to vote on a discharge motion on the Senate floor to force a revision to the budget resolution out of the Budget Committee because such a motion would first require the secretary of the Senate to be notified of a tie vote in committee.

Republicans could keep a revision to the budget resolution bottled up in committee by boycotting any vote to send it to the floor.

That would deny the Budget Committee a quorum and Senate rules prevent legislation from being reported out of committee without a quorum or majority of the panel physically present.

Prior to the parliamentarian's latest ruling, quietly issued on Friday, Schumer thought he might be able to pass two or even three more reconciliation bills in 2021, and thereby bypass GOP filibusters and enact Biden's agenda through several packages.

MacDonough advised Schumer's staff in April that multiple revisions would be allowed to a budget resolution, which Schumer's spokesman at the time hailed as "an important step forward."

"The Parliamentarian has advised that a revised budget resolution may contain budget reconciliation instructions. This confirms the Leader's interpretation of the Budget Act and allows Democrats additional tools to improve the lives of Americans if Republican obstruction continues," the spokesman said at the time.

But the advice was only provided in a broad brush, and important details of what exactly would be allowed had not yet been fleshed out.

The Schumer spokesman acknowledged in April "some parameters still need to be worked out."

Now, the only way Democrats could create multiple reconciliation vehicles based on the 2021 budget resolution or a yet-to-be-enacted 2022 budget resolution would be if Schumer convinced a Republican on the evenly divided Budget Committee to vote to discharge a Section 304 revision to the budget.

The net result is Democrats are where they thought they were in March. That's when they expected to pass only one more reconciliation package this year after they used the process to pass the $1.9 trillion American Rescue Plan on a party-line vote.

A spokesman for Schumer declined to comment on the parliamentarian's latest ruling.

That enabled Senate Budget Committee Chairman Bernie SandersBernie SandersParliamentarian: Democrats only get one more chance to sidestep GOP this yearBiden sheds hawkish past on deficit with debt-laden budgetBiden opens the back door to universal basic incomeMORE (I-Vt.) to automatically discharge the 2021 budget resolution to the floor earlier this year because he did so well after the deadline of April 1, 2020.

But MacDonough has ruled that no such forcing mechanism exists for a revision to the 2021 budget under Section 304.

"Unlike the 301 resolution, a section 304 resolution is an optional procedure untethered to the Section 300 structure," the parliamentarian wrote in her guidance to senators. "There is no deadline for its reporting from committee or its completion in the Senate."

The parliamentarian warned that allowing for automatic discharge of revisions to the budget resolution out of the Budget Committee and onto the floor would risk "eroding the budget process," characterizing it as a scenario in which the budget panel would be churning out "meaningless, stop-gap measures or shells for future consideration."

"Auto-discharge is not appropriate for a 304 resolution," MacDonough wrote in conclusion.

Schumer's inability to discharge a revision to a budget resolution out of the Budget Committee is a problem posed uniquely by the Senate's 50-50 split. If Democrats controlled one more seat, it would give them an advantage of at least one seat on all committees. That would then allow them to pass multiple reconciliation vehicles in a single year.

The problem of discharging a revision to the 2021 budget resolution out of committee was overlooked in April.

MacDonough in her memo to senators warned that the drafters of the 1974 Congressional Budget Act were leery of potential abuse of the power to revise budget resolutions and made clear in their drafting of Section 304 of that law that they intended it only to respond to changing economic conditions.

"The drafters and early users of 304 uniformly believed that it was to be used in extraordinary circumstances and not for things that should have been or could have been foreseen and handled in a 301 resolution," MacDonough wrote. "The potential for abuse was clear in 1974 and is all the more obvious now."

If the democrats want to bring back the old Senate Parliamentarian, I'll be with them. Two is still better than the 1 Republicans got.


So we have a bit of good news today.

I recall you tread on her earlier today, ain't politics instantaneous fun when you have a bucket of rotten tomatoes in one hand and a bouquet of robust dandelions in the other to toss.

You seem to think he is applauding her.

Reread his comment. Democrats should only have 1; just like the Republicans did when they controlled the House and Senate. Democrats already squandered one on the 2021 Budget.

She took a lot of flack for the earlier ruling giving the Democrats 4. She thinks giving them only two will get conservatives off her back. She is dead wrong.

There will be changes made to the fillibuster rule before the end of this year. Neither Biden or the Democrats in Congress are going to allow the midterms to come and go in an atmosphere where McConnell can veto every possible bill.

. Neither Biden or the Democrats in Congress are going to allow the midterms to come and go in an atmosphere where McConnell can veto every possible bill.

Should have elected more Democrats. Or offer bills that it's impossible for Republicans to oppose.

But, my God, the fucking hypocrisy of Democrats whining about the filibuster and obstruction.  I'd to see what happens to a progressicves brain if they ever try and square their arguments from 2016-2020, with their coduct now,.

Destroying the filibuster, packing the Supreme Court. Amazing to see the people who claimed Trump destroyed democratic norms take a blow torch to the system.

What a bunch of frauds.

Neither has happened, you seem to be the one wielding a blowtorch.

Or offer bills that it's impossible for Republicans to oppose.

The only bills Republicans do not oppose is more tax cuts for their corporate masters, or laws aimed to restrict minorities from voting.

But, my God, the fucking hypocrisy of Democrats whining about the filibuster and obstruction.  I'd to see what happens to a progressicves brain if they ever try and square their arguments from 2016-2020, with their coduct now,.

They didn't even come close to the number Republicans did during Obama administration. 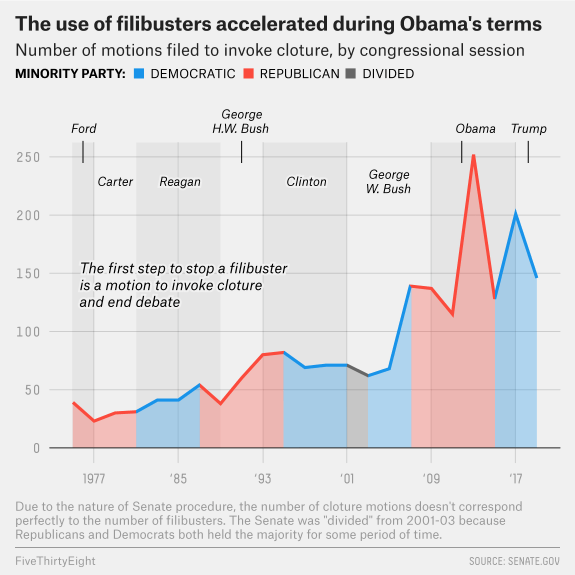 Destroying the filibuster, packing the Supreme Court. Amazing to see the people who claimed Trump destroyed democratic norms take a blow torch to the system.

Filibuster isn't destroyed and only the republicans are packing the supreme court by violating their own rules.

Really? Then why are the Democrats talking so much about doing it? Or are you trying to deny that the majority of Democrats do want to do away with the filibuster and pack the Supreme Court?

After the last five plus years of obstruction and BS the Democrats put this country through; they have no damn right to talk about anyone else.

Republicans do not oppose is more tax cuts for their corporate masters, or laws aimed to restrict minorities from voting.

do you not read the news? The Republicans just offered to borrow almost a  trillion dollars to fund infrastructure projects.  Sad the Democrats won't compromise.

Democrats employed the filibuster against more Trump nominees than it was used in the entire history of the country before Trump.

Do you not read the news? They want to.

the republicans are packing the supreme court

That's just nonsense.  Why would you bother making up such an easily disprovable claim? By all means, show us where the Republicans added a 10th or 11th justice to the Supreme Court.

Talking and doing are separate things, until that even looks vaguely to likely happen you might want to arrest the further development of unfounded fears blasted out at Foghorn Leghorn levels by the minorstream media.

Doesn't count when they have a gun to their head.  Democrats have a good chance of pulling it off with no Republican support, even though it won't stop Republicans from taking credit for it.  Just like they are doing for the American Rescue Plan.

Democrats employed the filibuster against more Trump nominees than it was used in the entire history of the country before Trump.

Have you seen his nominees?  How many have now been indicted?

Do you not read the news? They want to.

YOU said it was.  Make up your mind.

Why would you bother making up such an easily disprovable claim?

Why would you quote only a portion of my sentence?  It is almost like the rest of my sentence goes against the point you are failing to make.