A Michigan man who sexually assaulted a Tickle Me Elmo doll during a home inspection wants his charges dropped.

Kevin VanLuven, 59, was charged earlier this month with an indecent act with the stuffed doll has requested that a judge ignore his verbal and written confessions to police, which came after cops were called to a home in suburban Detroit in March, reported The Smoking Gun .

He claims he was improperly questioned while in police custody.

On Mar. 12, VanLuven was conducting a home inspection for a potential buyer.

Two hours later, the homeowner, Jaida Dodson, checked out her home security cameras remotely, to see how the inspection was going, and was horrified to see him allegedly remove Elmo from her son’s bedroom and do the dirty to the doll.

Dodson called 911, police arrived at her home and the responding officer, Deputy Patrick Yens, recalled she “believed that a home inspector was pleasing himself with a doll, I believe,” stated the court transcript.

Yens questioned VanLuven after showing him the home surveillance footage and VanLuven “admitted to placing his penis in Elmo’s mouth, in the doll’s mouth.”

Yens added that VanLuven “apologized” and “ashamed” of his actions.

The deputy testified that the evidence was seized from the home, saying in court, “We collected Elmo and took Elmo in.”

VanLuven has been charged with aggravated indecent exposure and malicious destruction of personal property.

He spent more than five weeks in jail for the misdemeanors before posting bond.

Dodson and her family have relocated to Springfield, Mo. – presumably without Elmo.

VanLuven’s hearing to suppress is scheduled for Aug. 17.

If she is relocating to Springfield she should rethink that. Missouri and Springfield, in particular, is in the midst of a huge spike in covid and the state is only 40% vaccinated and most of positive side of that is from the two big cities, KC and STL.

He must have confused this doll with Blow Me Elmo.  On a side note, is it weird that they have a camera in their kid’s room?  At some point they’re going to see something they can’t unsee.  How about a little privacy?

I'd be afraid someone would hack the camera.

He must have confused this doll with Blow Me Elmo.

Or maybe with Stop Touching me Elmo .

Elmo is reportedly recovering from a bad case of an STD known as St. Elmo's Fire... 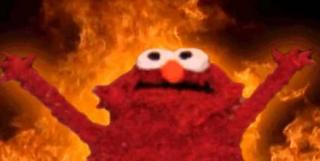 You'd think the guy would just buy his own Tickle Me Elmo, nobody would know or care what he was doing with his doll in the privacy of his own home.

What next?  Wonder what he wrote in the inspection report?

Make him pay for poor Elmo and credit for time served and take inspector's credentials.