Mike Richards , the announced new permanent host of the TV game show Jeopardy , is stepping down, after a couple scandals have called his judgement and integrity into question.

Richards, one of the show's former executive producers, was selected earlier this month to replace longtime Jeopardy! host Alex Trebek, who died last year. His hiring was immediately controversial and was accompanied by the resurfacing of his alleged past controversial remarks and behavior—eventually prompting Richards to issue a public apology. The ADL dismissed Richards' apology on Thursday, while arguing that the host's "pattern" of behavior demanded an investigation.


"New 'Jeopardy!' host Mike Richards' disparaging remarks about Jews, women & Asians are no laughing matter," the ADL tweeted alongside a link to a Washington Post article on a report that website The Ringer published on Wednesday. "Stereotyping is an entry point to hate and his apology lacks acknowledgment of its harm. This reported pattern warrants an investigation."

Richards was also accused of "rigging" the process that led to him being chosen as the new host.  Jeopardy has said now that they will go back to rotating guest hosts until another new permanent host is selected.

On an episode following a massive iCloud hack in 2014, in which intimate photos of famous actresses were leaked, Richards ask the two women if they had ever taken nude photos. He then prodded for more, asking his cohost to go through her phone and show him an image, The Ringer reports. 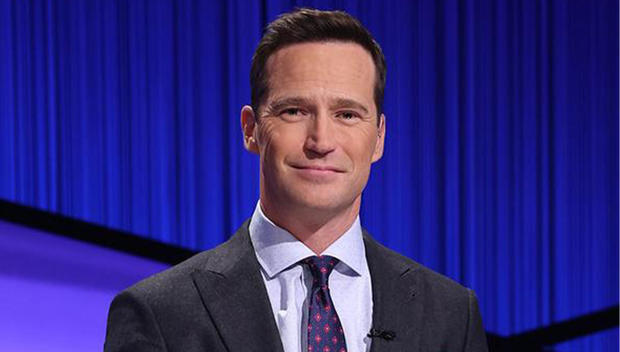 https://cbsnews1.cbsistatic.com/hub/i/r/2021/08/19/ebe3ec39-d020-4999-bcf5-1fabbac859ff/thumbnail/1240x704/d9ddf8baffca37e0848d387d3e7d7be7/miker.jpg 2x" > According to a review of his podcast, Mike Richards used several insensitive terms and slurs, including derogatory terms for little people and those with an intellectual disability and calling women fat. He also has made insensitive remarks about Jewish people.    Sony Pictures/"Jeopardy!"

According to report, written by Claire McNear, Richards used several insensitive terms and slurs, including derogatory terms for little people and those with an intellectual disability and calling women fat. He also has made insensitive remarks about Jewish people.

When his cohost, Beth Triffon, discussed problems at her apartment, Richards asked: "Does Beth live, like, in Haiti? Doesn't it sound like that? Like, the urine smell, the woman in the muumuu, the stray cats."

He also criticized Triffon for giving a dollar to a homeless woman, saying the woman would use it to buy crack or meth, according to   The Ringer,   which included several audio examples in their reporting.

In a statement to CBS News, Richards said: "It is humbling to confront a terribly embarrassing moment of misjudgment, thoughtlessness, and insensitivity from nearly a decade ago."

"Looking back now, there is no excuse, of course, for the comments I made on this podcast and I am deeply sorry," he said. "The podcast was intended to be a series of irreverent conversations between longtime friends who had a history of joking around. Even with the passage of time, it's more than clear that my attempts to be funny and provocative were not acceptable, and I have removed the episodes.

"My responsibilities today as a father, husband, and a public personality who speaks to many people through my role on television means I have substantial and serious obligations as a role model, and I intend to live up to them," Richards said.

Richards was also involved in a discrimination law suit brought by a "Price Is Right" model. In 2010, Brandi Cochran accused Richards of firing her because she had become pregnant.

The   complaint alleges   that after several models had been fired and Cochran told Richards about her pregnancy, he allegedly said: "Go figure! I fire five girls ... what are the odds?'" Cochran thought Richards meant he "would have selected her for layoff if he had known that she was going to get pregnant." After she gave birth, she found out her contract was terminated.

Another model on the show also filed a suit alleging she was wrongfully terminated and subject to harassment at work. According to   Variety , Richards was dismissed and the suit was settled out of court in 2013.

In regards to the lawsuits, which were recently resurfaced by several media outlets, Richards sent a note to "Jeopardy!" staff, provided to CBS News by Sony Pictures.

"I want to address the complicated employment issues raised in the press during my time at The Price is Right ten years ago," Richards said in the note, which was sent out when it was rumored he would be named host of the show. "These were allegations made in employment disputes against the show. I want you all to know that the way in which my comments and actions have been characterized in these complaints does not reflect the reality of who I am or how we worked together on The Price is Right."

"I know firsthand how special it is to be a parent. It is the most important thing in the world to me. I would not say anything to disrespect anyone's pregnancy and have always supported my colleagues on their parenting journeys," he said.

Earlier this month, Sony Pictures  announced   Richards was named full-time host of "Jeopardy!" and actress Mayim Bialik will serve as host of primetime and spinoff series.

The Ringer interviewed several people with connections to Sony Pictures, "Jeopardy!" and past shows Richards worked on, "The Price Is Right" and "Let's Make a Deal."

One source said employees were blindsided by the choice to make Richards host of "Jeopardy!" after longtime host   Alex Trebek   died. Others depicted Richards as "exclusionary and dismissive of longtime show employees," The Ringer reports.

You would think that Mr Trebek would have been aware of this and maneuvered to have him fired as producer of the show.

I agree and I think she would take it

Or at least move her up to the position and hire someone (LeVar) to replace her.

I don’t think she can do it full time. She still has a reasonably busy acting schedule.

What is she acting on now? I thought The Big Bang Theory had its final season?

I don't watch network TV so please pardon my ignorance

She’s doing a thing on Fox called “Call Me Kat.” I haven’t watched it, but she’s the star and it’s been renewed for another season.

Thanks for the information.

Maybe LeVar Burton is available for full time host. I liked him a lot. Then there was that handsome football player. Can't remember his name. Liked him a lot, too

I mean, people love LeVar, right? I hear he was a little nervous, but I think also he would still like to do it.

Mayim Bialik was the much better suited choice to host the show.  Hope she is the new permanent host. Richards should never have been chosen to begin with. Glad to see this happen.

I think his trying to rig the selection process so he would be chosen ( he took the spot of another candidate as guest host of the show in a somewhat dishonest way)  is more serious than  the un pc jokes, although it would not be a good look for Jeopardy to have a host with baggage about offensive comments either.

"On August 11, “Jeopardy!” announced that Mike Richards would take the helm alongside “The Big Bang Theory” star Mayim Bialik. There was a fair amount of pushback among fans in the immediate wake of the decision. Initially, it was mostly because he was an executive producer on the show and was involved in its selection process."

Hope she does get the job. She was really good in that spot. Of course there were others too but since she was going to be "along side" Richard so perhaps she's in.

I don’t understand how the game show people could go through what seems like a pretty thorough process and miss this. Then, they announce him and it’s practically common knowledge.