See inside a 958-foot cargo ship, from the crew's living quarters to the massive engine room

In the video, second mate Bryan Boyle shows the mechanics that keep the ship moving, as well as the crews' living quarters on the ship.

The container ship that closed the Suez canal a few months ago was one of the new neo-Panamax class vessels.

The size of the newest class of vessel requires many ports to dredge to a 50-foot depth and requires cranes that have a 22 container-wide reach from port to starboard.

A merchant marine gave a tour of a 958-foot cargo ship that showed the intricacies of hulking freighters that haul 90% of the world's goods.

In the video, second mate Bryan Boyle records the vast array of mechanics that keep the ship moving, as well as the crew and officer's living quarters on the Maersk ship, which was minted in 2006.

Though the video was taken in 2019, Boyle told Insider it provides insight into the lives of shipping crew today as hundreds of cargo ships wait to dock in US ports.

In the ship's voyage, it sets out from Norfolk, Virginia, making several stops in the US before setting out to Belgium, Germany, and the Netherlands, to name a few destinations.

"I've had the opportunity to work on some interesting vessels," Boyle told Insider. "I've gotten to go to places that the average person wouldn't even know about. It's one of the most appealing aspects of the job."

Boyle said that there's a thrill to arriving in new destinations, remembering how he spent over a month in Africa on one trip. However, the amount of time that crews get to explore new destinations has dwindled over the years, he said, as ships rush to get in and out of ports as fast as possible and early COVID-19 restrictions set limits to crew excursions.

The video shows Boyle's living quarters, as well as a movie locker that holds hundreds of titles.

Entertainment options for the ship's crew of 20 to 25 people are limited on the cargo ships. Boyle said that workers' time off can include a mix of movies and games, as well as gym-time.

"Many ships were not allowed to eat with fellow crew mates or go to the gym," Boyle told Insider. "You were only allowed in your room or work area."

Take a look at a view of the crew's mess hall below.

The video also highlights the mix of old and new technology that helps keep the supply chain moving, pairing engine control rooms that look like they belong on a space ship with a massive gyro compass.

The navigation bridge also provides an unrestricted view of the waters ahead and operates as a space where the captain and officers can man the entire operations of the vessel.

The ship has a massive gyro compass that helps guide its course.

The first seaworthy gyro compass was produced in 1908. It operates as a type of non-magnetic compass that uses a fast-spinning disc and the rotation of the Earth to find geographical direction.

The video shows the engine room and the massive combustion engine that helps power an equally-giant propeller.

Boyle takes viewers on a tour of the exterior of the ship as well, labeling individual parts of the ship and even touring the ship's life boat.

The video ends by showing how the ship pulls up to a dock in Germany.

Do you work at sea? Reach out to the reporter from a non-work email at gkay@insider.com

Read the original article on Business InsiderContinue ReadingShow full articles without "Continue Reading" button for {0} hours. Microsoft and partners may be compensated if you purchase something through recommended links in this article.

For a comparison, the new neo panamax vessels are as large as an aircraft carrier.

I didn't see any signs of cctv in the tour. I would have thought that would be a no brainer in this day and age. I did see a couple of prime high powered rifle perches with my lounge chair and cooler though.

they're probably all exterior, since the whole ship is a mass of steel and any cctv system would have to be hard wired.

All container ships have CCTV camera's throughout the interior of the ship.

I figured as much.

Already on the drawing boards are the latest class of super container ships the ''Mallacca Class'' which will carry 30,000 containers.

Professor Principal
2  Sparty On    9 months ago

No matter how big and strong the ships are mother nature is bigger and stronger.

This is a photo of the APL China hit by Typhoon Bab in 1998, 400 containers went overboard and 1,000 more were damaged. At the time it was the most expensive loss of cargo on record. 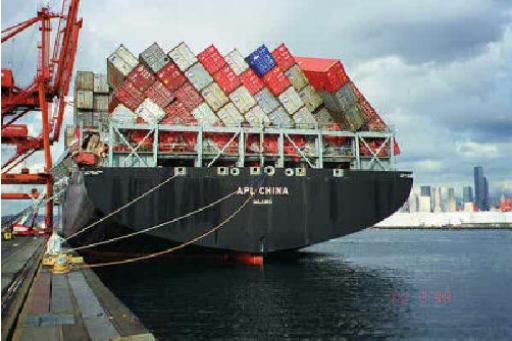 It was surpassed this year by the One Apus which lost 1816 containers overboard and hundreds more damaged. 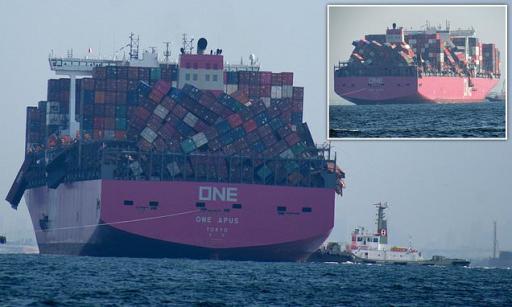 The problem with containers going overboard is that they create a hazzard. They tend to float just below the surface for days before they sink to the bottom and if they are loaded with chem/haz mat more problems exist.

Thanks, Kavika. That was fun to watch. It's amazing how clean everything seemed. Made me wonder if ships have contracts to have massive cleaning done when in port.

Your welcome. The crew is responsible for keeping the ship, ''ship shape'' but if it's in port for repairs and requires some special type cleaning than outside vendors are brought in.