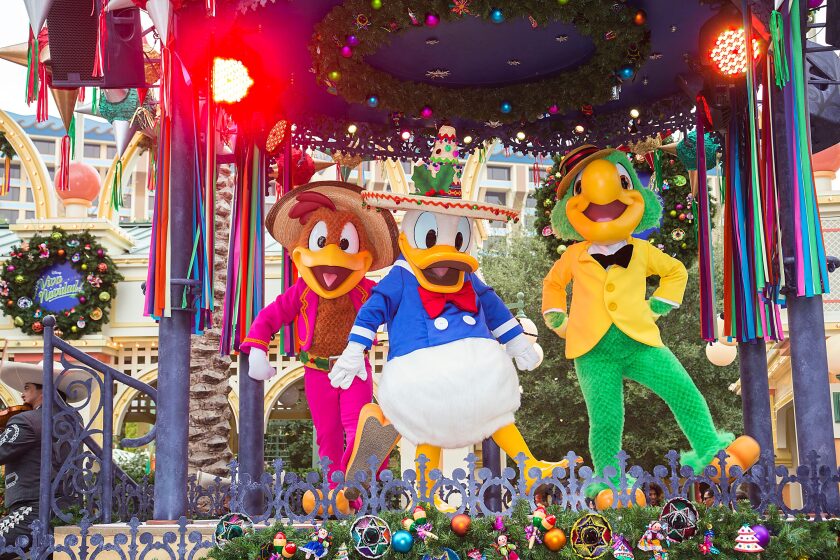 The push for diverse content in film and television has real-world implications, especially in a pop landscape driven by brands, franchises and easily recognizable intellectual property.

This is readily apparent at the Disneyland Resort, where recent big-name theme park additions have celebrated the “Star Wars” and Marvel universes. Yet more steadily and quietly has been a transformation of the park’s Disney California Adventure to focus its events on the cultures Disney films represent rather than the films themselves.

Most notable is   Festival of Holidays , which this season runs through Jan. 9 and is anchored by the Disney ¡Viva Navidad! street parade featuring the Donald Duck-led Three Caballeros. A folksy event that from beginning to end is a boisterous celebration of Latin art and music, ¡Viva Navidad! uses the characters from Disney’s mid-1940s goodwill film “The Three Caballeros” as a jumping-off point to showcase folklórico dancers and mariachis as well as 12-foot-tall mojiganga puppets, that is, large-scale, papier mâché sculptures that dizzyingly rocket up and down a small portion of California Adventure.

¡Viva Navidad! has become something of a mission statement for live entertainment in California Adventure.


Beyond the Festival of Holidays, which itself is featuring more entertainment recognizing Hanukkah and Kwanzaa, among other cultural traditions, California Adventure celebrates Lunar New Year with Mulan, and increasingly goes deep on Día de los Muertos thanks to a little help from “Coco.” The park even boasts a “Black Panther"-inspired training session that takes seriously the multiple African-inspired cultures of Wakanda by   creating a show anchored in philosophical lessons . 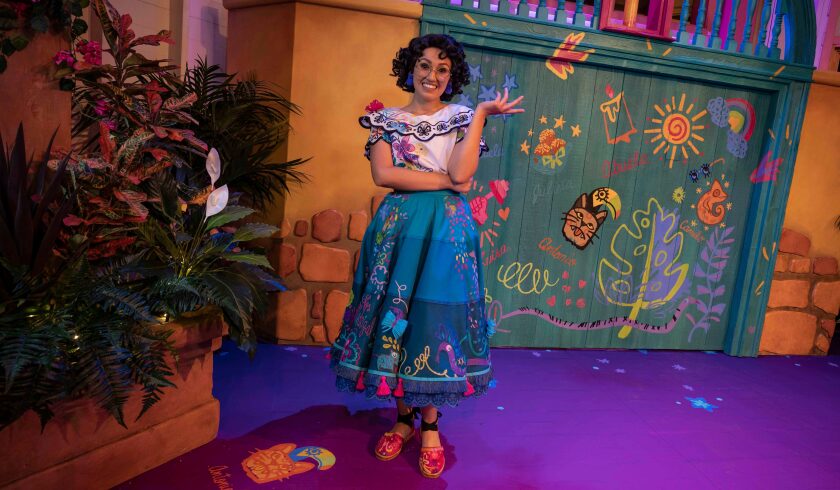 The newest character added to Disney California Adventure’s Festival of Holidays is Mirabel, seen here played by a Disney cast member, in part to promote the upcoming Disney film “Encanto.”

This year, California Adventure added elements from upcoming animated film “Encanto” to its Festival of Holidays, in part to help market the film — there’s a requisite meet-and-greet with Mirabel, the film’s lead character — but to also bring Colombian music to its Paradise Gardens section of the park. With ¡Viva Navidad! and Día de los Muertos celebrations already in that area, Paradise Gardens increasingly feels like an almost year-round celebration of Latin culture.


“It cracked the code on how we could be culturally authentic and uniquely Disney,” says Festival of Holidays architect Susana Tubert of the now 8-year-old ¡Viva Navidad!.

“I think it gave confidence, if you will, to all of us, to say that we can do this, that we can have Lunar New Year and Plaza de la Familia that celebrates ‘Coco’ and Día de los Muertos. The idea is we drop a bridge where people can cross into a cultural experience that is not their own and have an emotional response to it — if they don’t have an emotional response it’s didactic — and then cross back. The bridge lifts and you go back to your life, but you’re changed forever because you saw a piece of yourself in someone else’s story.”


While the idea and success of ¡Viva Navidad! was that it can feel a bit like a Mexican street parade, Tubert’s concept of dropping a “bridge” to extend a hand for non-Latin guests into the show’s world can be seen in its music choices. Though ending with the always-festive “Feliz Navidad” from José Feliciano, the show launches with Paul McCartney’s “Wonderful Christmastime.” While it’s a Mariachi-style take on the song, it does start the show with a Western influence before moving into more traditional folk and dance.

Tubert says there are some unique challenges and balancing acts required for putting together a culturally focused show in a major tourist destination such as a theme park.

“It was looking for a way to make sure that the experience didn’t feel — ‘Oh, this is South of the border. This doesn’t touch me,’” Tubert says when asked about the choice of starting with a McCartney song.

“I remember saying to the team early on, ‘Think of this as a Norman Rockwell painting set in Latin America.’ It’s still a Norman Rockwell painting. We don’t celebrate that differently from North America. I grew up in Argentina and we had fans going and fake snow and it was hot, but it was still the same celebration. It’s about the balance of bringing enough of everyone’s perspectives so our guests feel welcomed.” While for many guests the main draw of the Festival of Holidays will no doubt be the food and drink — an assortment of booths around the park offer items designed to lightly mash-up cultural traditions — there’s no denying the sense of life the event brings to the park. There’s arts and crafts for the little ones — construct a dreidel or learn about the natural rhythms of Colombian music — and music that celebrates Hanukkah and Kwanzaa, the latter a new addition courtesy of a soulful a cappella group.

While the emphasis on Latin America and ¡Viva Navidad! is no doubt a reflection of Disneyland’s Southern California customer base, Tubert says the festival is providing lessons that continue to   influence her approach to the parks .

“We have Mostly Kosher performing, and we know that all kinds of families are joining in in this Hanukkah celebration,” Tubert says. “That’s a huge milestone for Disney. And Diwali, kids can get up and learn Bollywood and dance. On the surface, it’s an entertainment moment. But on a deeper level, it’s a dialogue, a moment of experiencing someone else’s culture.”

And many such moments are confidently handled without any Disney characters.

Isnt it more fun when everyone gets involved?

This is great. One of the best forms of education is to enter cultures other than your own.

Large numbers of Hispanics are leaving the Dems