Rachel Zegler, an unknown who plays the lead female character Maria, projects a hopefulness and unvarnished sincerity that Natalie Wood was a little miscast for in the first version. Zegler is great and probably deserved an Oscar nod. 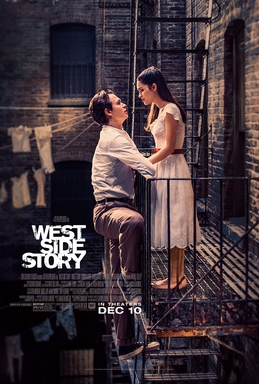 I watched West Side Story yesterday, the new one, nominated for 7 Academy Awards tonight, including Best picture. Here is my take.

The first thing that will strike the viewer I believe is how professional and competent this movie is. The sets, music and choreography are all top of the line. For someone who had never directed a musical before, Steven Spielberg got it all right.

The acting is an improvement on the 1961 film pretty much right down the line. Rachel Zegler, an unknown who plays the lead female character Maria, projects a hopefulness and unvarnished sincerity that Natalie Wood was a little miscast for in the first version. Zegler is great and probably deserved an Oscar nod. The actor who plays Tony, Ansel Elgort,  is an improvement too.

The photography is great, which is not a surprise because it is great in all Spielberg films and he still has his long time cinematographer with him.

I think there are a couple problems with calling this a great movie though. First and foremost, even after seeing I still think it was unnecessary. The 1961 film was one of the most honored movies in Hollywood history. It is iconic, even until today.  Remaking West Side Story is like remaking Gone With The Wind or Wizard Of Oz.  If the new version had come first I think it would have a better claim to being a great movie. I just dont think it is different enough from the first version to get that sort of recognition though.

The second problem I think the film has is that this type of film, where the characters burst into song constantly, in order to advance the plot, is out of fashion today. Musicals today mostly have songs that are self contained and are what the characters do, not what they are trying to say in lieu of dialogue. The box office for this West Side Story was not good, signaling that this type of show , on screen, is something of an anachronism.

Not my kind of movie.

For some reason I keep picturing Baby Driver breaking out into song...

Grease was popular when I was young.

Generally, musicals suck, 1961s West Side Story sucked. No way am I going see the new version. The only musical I've seen that I enjoyed was The Sound of Music.

I forgot about that one, I liked it as well