"Dickens was first translated into Chinese in 1885, and he's also part of the English-language curriculum in many countries.

BUZZ NOTE:  A very important part of this article is a video which I am unable to copy.  Please click the "SEEDED CONTENT" link or this link to go to the source to watch and listen to the video: 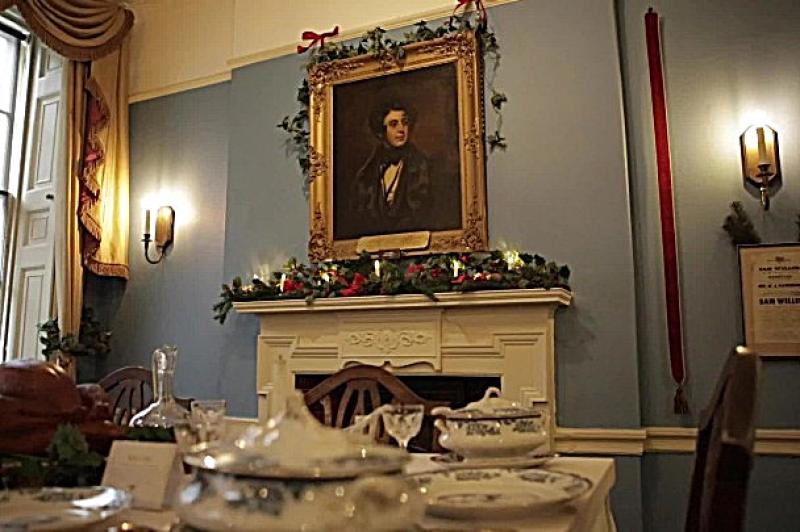 Increasing numbers of Chinese visitors to the Charles Dickens Museum in London have led to specially printed visitor guides being produced to meet demand.

The museum in central London is the house where the legendary English novelist lived when he wrote Nicholas Nickleby and Oliver Twist, and attracts visitors from all over the world.

"Last year we noticed increased numbers from China, but we didn't have an audio guide for them, so we got the leaflets done instead," said curator Cindy Sighrue.

"Dickens was first translated into Chinese in 1885, and he's also part of the English-language curriculum in many countries.

"We know from who comes to the museum and also who visits our website that we have interest from all over the world. It's amazing when at the end of the month you look at your website figures and see that you've had hits from around 150 countries."

A seasonal exhibition has just opened at the museum, entitled Beautiful Books: Dickens and the Business of Christmas, about his short story A Christmas Carol, its literacy legacy, how it changed publishing and helped to define the modern idea of Christmas.

The exhibition features rare editions of Dickens' own books and also a print of the first Christmas card ever produced, which coincidentally was in the same year as Dickens' own contribution to the Christmas tradition, 1843.

"There are various reasons they occurred in the same year, some of which are to do with developments in print production," exhibition curator Louisa Price told China Daily.

"Also Dickens and (card creator) Henry Cole knew there was a growing market for this new festival and it was something people would want, so they put it out then.

"When Dickens wrote A Christmas Carol, he was trying to make something specific for that market. The book's length and size are perfect because it was something that could be read around the fireside, in one sitting. Also it was beautifully designed as a perfect gift.

"Another thing that has meant it is so enduring is that the length and nature of its story make it perfect for adaptation. Every year we see new versions."

Dickens was hugely popular in his lifetime, largely through his longer novels which were serialized in magazines in monthly installments. What made A Christmas Carol different, and has contributed to its enduring legacy, was the possibilities offered by its short format.

"Dickens was concerned with the quality of paper, the binding, the hand coloring of illustrations and details like that. He thought of it as a complete package," said Simon Eliot, emeritus professor at the University of London.

"The first edition sold out in a week but the money spent producing it meant he didn't make any money on it, but five more editions in the next year meant he soon did."

As well as being discovered by a new reading audience every year, A Christmas Carol has proved endlessly adaptable for the stage and screen, with the Internet Movie Database website listing 79 exact title matches, and 200 more films and programs with related titles inspired by Dickens' work. But Dickens' contribution to Christmas came at a professional cost.

"It locked him in, every year he had to write another Christmas story for his magazines and he became almost trapped by a tradition he had generated," said Eliot. "In his novels, the Christmas scenes become much darker and more somber. The Christmases in Great Expectations or The Mystery of Edwin Drood are very dark; there's no tinsel and jollity."

But at Christmas more than ever, the Dickens Museum remains an irresistible magnet for booklovers from around the world.

"Christmas is our busiest time of year, when the public really want to come to see performances and the house decorated as Dickens would have known it," said Price.

"We know from his letters and some of his illustrations how he would have decorated it, so it's a very festive time to be here."