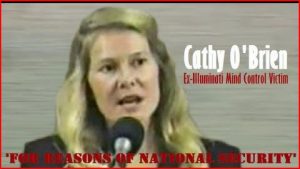 “Hillary Clinton is the only female to become sexually aroused at the (Removed because of it's graphic nature)”.

M y name is Cathleen (Cathy) Ann O’Brien, born 12/4/57 in Muskegon, Michigan. I have prepared this book for your review and edification concerning a little known tool that “our” United States Government is covertly, illegally, and un-constitutionally using to implement the New World Order (One World Government). This well documented tool is a sophisticated and advanced form of behavior modification (brainwashing) most commonly known as MIND CONTROL. My first hand knowledge of this TOP SECRET U.S. Government Psychological Warfare technique is drawn from my personal experience as a White House “Presidential Model” mind-control slave.

Much of the information enclosed herein has been corroborated and validated through brave and courageous “clean” members of the law enforcement, scientific, and Intelligence communities familiar with this case. These individuals’ efforts helped me to understand and corroborate what happened after a lifetime of systematic physical and psychological torture orchestrated to modify my behavior through totally controlling my mind. Some of these courageous individuals are employed by the very system that controlled me and live in fear of losing their jobs, their families, or their lives. They have gone as far as they dare towards publicly exposing this tool of engineers of the New World Order–to no avail. This book is a grassroots effort to solicit and enlist the public and private support of Human Rights advocates, the recognized, respected doors in America to expose this invisible personal and social menace. This can be done by well organized, cooperative citizens with a passion for justice, who have expressed interest in restoring our Constitution and taking back America. This copy you hold is for your edification and action.

…It is my patriotic respect for the principles of truth, justice, and ultimately that freedom on which America was founded that compels me to expose the world domination motivations of those in control of our government, commonly referred to as the Shadow Government. By taking back America NOW, we can maintain the integrity of our country’s history and future by detouring its destined course of being recognized world wide for the mind-control atrocities unleashed on humanity that literally begin where Adolph Hitler left off. Hitler’s version of world domination that he termed in 1939 the “New World Order” is currently being implemented through advanced technologies in among others, genetic mind-controlled engineering by those in control of America.

…The expertise of my primary advocate and skilled deprogrammer, Mark Phillips, developed through his U.S. Defense Department knowledge of “Top Secret” mind-control research and researchers, was responsible for the restoration of my mind to normal functioning. As a result, I have recovered the memories related in this text, and having survived the ordeal, have reached this point of enormous frustration. In 1988, through a series of brilliantly orchestrated events, Mark Phillips rescued me and my 8-year-old daughter, Kelly, from our mind-controlled existence and took us to the safety of Alaska for rehabilitation. It was there that we began the tedious process of untangling my amnesic mind to consciously recall what I was supposed to forget.

Many U.S. and foreign government secrets and personal reputations were staked on the belief that I could not be deprogrammed and rehabilitated to accurately reveal the criminal covert activities and perversions in which Kelly and I were forced to participate, particularly during the Reagan/Bush Administrations. Now that I have gained control of my own mind, I view it as my duty as a mother and American patriot to exercise my gained free will to expose the mind control atrocities that my daughter and I endured at the hands of those in control of our government. This personal view of inside Pandora’s Box includes a keen perception of how mind control is being used to apparently implement the New World Order, and a personal knowledge of WHO some sort of the so-called “masterminds” are behind this world and mind dominance effort.

While I am free to speak my mind, Kelly, now 17, is not so fortunate. Kelly has yet to receive rehabilitation for her shattered personality and programmed young mind. The high tech sophistication of Project Monarch trauma-based mind control procedures she endured, literally since birth, reportedly requires highly specialized, qualified care to aid her in eventually gaining control of her mind and life. Due to the political power of our abusers, all efforts to obtain her inalienable right to rehabilitation and seek justice have been blocked under the guise of so-called “National Security”. As a result, Kelly remains untreated in the custody of the State of Tennessee–a victim of the system–a system controlled and manipulated by our abusive government “leaders”–a system which exists due to federal funding directed by our perverse, corrupt abusers in Washington, D.C. She remains a political prisoner in the custody of the State of Tennessee to this moment, waiting and hurting!

You are collecting every demented mind in America under your NT banner.

This Cathy O'Brien, the conspiracy theorist...LOLOLOL

We are collecting a freak show.