Guns And KKK Members At Gettysburg Confederate Rally, But No Foes To Fight

Some carried semi-automatic rifles ― permitted in Pennsylvania ― as they peered out across the battlefield with binoculars, on the lookout for the black-clad, face-masked anti-fascists, anarchists and socialists they said they had heard were traveling to the national park to dishonor Confederate graves, monuments and flags.

Although many came expecting violence ― even after Antifa made it clear its adherents never planned to show up ― the only bloodshed came when a lone militia group member accidentally shot himself in the leg. 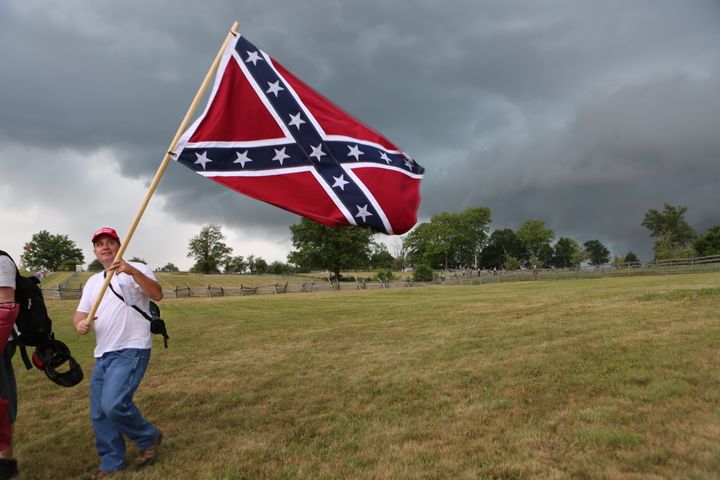 ANDY CAMPBELL / HUFFPOST
Part of the scene at the Gettysburg Battlefield on Saturday.

In the two years since white supremacist and Confederate flag admirer Dylann Roof massacred nine black parishioners at a South Carolina church,  the movement to remove Confederate symbols from public property has gained renewed purpose and momentum .  So far, 60 Confederate symbols have been removed from city and state-owned land across the U.S., according to the Southern Poverty Law Center. Most recently, the city of New Orleans  toppled four statues honoring the Confederacy.

This has incensed and energized militia groups and white supremacists across the country, who claim Confederate symbols represent heritage and history, not hate. In May, white supremacists  showed up  with torches at a monument to Confederate Gen. Robert E. Lee in Charlottesville, Virginia, after the city moved to take it down.

Saturday’s rally in Gettysburg showed pro-Confederate activists increasingly agitated, armed, and itching for a fight ― even when there is no one to clash with them.

Once a storm had passed through and the sweltering July sun returned, they gathered on the battlefield here just north of the headquarters of Union Army General George Meade, whose army repelled the Confederacy in the Civil War’s most decisive battle.

After singing the National Anthem and performing the Pledge of Allegiance, the hundreds of Southern Army enthusiasts ― many of whom wore Trump pins, hats or T-shirts ― took a moment to honor the Confederate flag.

“I salute the Confederate flag,” they said in unison, “with affection, reverence and undying devotion to the cause for which it stands.”

Billy Snuffer, who identified himself as the Imperial Wizard for the Rebel Brigade of the Knights of the Ku Klux Klan, told HuffPost that there were KKK members scattered across the battlefield to “aid law enforcement” and protect the area’s 20 or so Confederate monuments from Antifa.

“The Confederate battle flag has nothing to do with slavery,” he said, standing in the same area where 154 years ago the Confederate Army marched into town, abducting free black Americans and sending them to the South to be sold into slavery.

“This is our history, this is our heritage,” the Martinsville, Virginia, resident said of the monuments.

ANDY CAMPBELL / HUFFPOST
Billy Snuffer (right), the Imperial Wizard for the Rebel Brigade of the Knights of the Ku Klux Klan, stands on the Gettysburg Battlefield with another Klan member.

In mid-June, rumors had spread online that Antifa, a decentralized group known for violently confronting white supremacists and hate groups, planned to burn a Confederate flag and desecrate Confederate gravestones in Gettysburg on July 1, the date the three-day battle began in 1863.

The rumors mobilized various far-right groups, who secured permits from the National Park Service to show up en masse to the battlefield, setting the stage for what they thought would be a dramatic showdown between the opposing fringe elements of U.S. politics.

But the central Pennsylvania chapter of Antifa  told local newspapers  last week that it never intended to gather at Gettysburg.

The rumors, the group told HuffPost in a Facebook message, were the work of online trolls. One such tale said Antifa members were going to urinate on Confederate gravestones. One problem: There  aren’t any Confederate gravestones  to desecrate. Although some confederate soldiers are buried at Gettysburg, their final resting places aren’t marked.

Still, efforts to quell the rumors didn’t stop anti-government militia groups from across the country ― including West Virginia, Michigan, Nebraska and California ― from showing up Saturday. 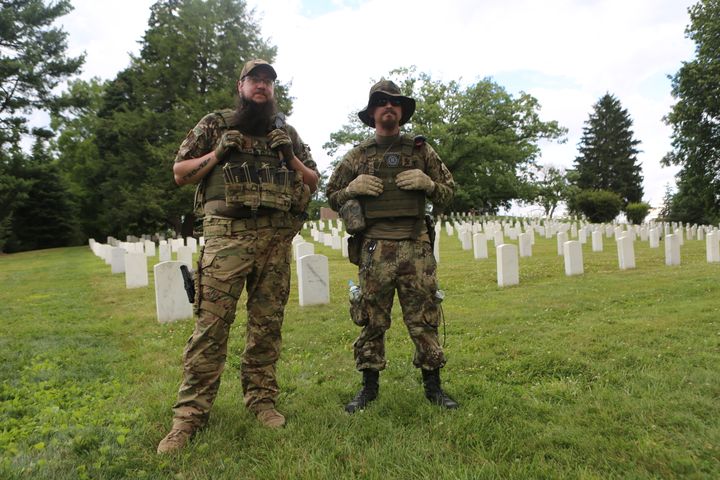 “Our main purpose is just to defend the historical parts of the city here and stop them from being destroyed and keep people who aren’t part of anything ... safe,” said a 27-year-old who would give his name only as Thor and who said he was a veteran of the war in Afghanistan.

He said he was aware that Antifa likely wasn’t going to show, but that he felt compelled to be there, just in case.

Thor, a Gettysburg-area resident and member of the anti-government militia group the  Three Percenters , wore an ammunition belt around a bulletproof vest. The sleeves of his camouflage uniform were rolled up, revealing the word “INFIDEL” tattooed to his arm.

Asked what he thought about all the Confederate symbols being removed from public property across the U.S., Thor didn’t mince words.

The assembled groups’ hatred for Antifa Saturday was surpassed only by their anger at the growing movement to remove Confederate symbols from public property. 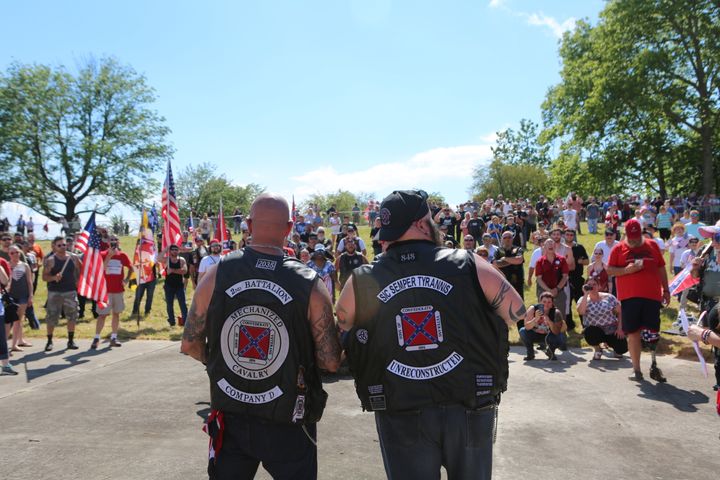 Ted Fields, a Sons of Confederate Veterans leader wearing a black leather biker vest, addressed the crowd using a megaphone and asserted that the dismantling of Confederate monuments could lead to the decimation of America itself.

“I believe their master plan is once they get us used to taking down some monuments here and there in some liberal cities, then they’re gonna try it out here and see if that works,” he said.

“The next thing you know, they’re going to take our Constitution and say you know what? That was written by slave-holders, it’s racist, let’s get rid of it and become a communist nation. I don’t want that on my watch.”

A woman named Jenny Lee, who claimed to be Robert E. Lee’s 3rd great grandniece, implored the crowd not to be bowed by political correctness.

“We must never back down or be intimidated by the antics of the ignorant,” she said. “And all the safety-pin-wearing, easily offended, butt-hurt, temper-tantrum-throwing, vagina-hat-wearing, face-covered, commie fascists can kiss my ass.”

Lee was forceful in telling the crowd that the Confederacy ― and by extension, everyone gathered at the rally ― wasn’t racist. The Civil War, she said, wasn’t about slavery. ( It was .)

Plus, she added to great applause, thousands of blacks fought for the South, neglecting to mention that they were  forced  to do so. As the rally concluded, the sound of cannons could be heard in the distance, as Civil War re-enactors not associated with the pro-Confederate rally shot off blank rounds, smoke billowing out across a different part of the battlefield. Actors in blue and grey uniforms played dead and injured.

But the only person actually shot Saturday in Gettysburg with a real bullet was a 23-year-old militia group member named  Benjamin Hornberger, of Shippensburg, Pennsylvania. According to U.S. Park police, Hornberger triggered his revolver when the flag pole he was carrying bumped against his gun holster. The bullet went into his leg. Police say officers quickly applied a tourniquet, likely saving his life.

According to PennLive , Hornberger talked to paramedics and “seemed in good spirits.”

''But the only person actually shot Saturday in Gettysburg with a real bullet was a 23-year-old militia group member named Benjamin Hornberger, of Shippensburg, Pennsylvania. According to U.S. Park police, Hornberger triggered his revolver when the flag pole he was carrying bumped against his gun holster. The bullet went into his leg. Police say officers quickly applied a tourniquet, likely saving his life.''

Randy  replied to  Kavika   5 years ago

Part of a group ready to spring to the defense of our country in terrible need....if they don't all accidentally kill themselves first.

A well regulated militia being necessary to the security of a free state, the right of the people to keep and bear arms shall not be infringed.

What the help happened to the "Well regulated Militia" part? The gun rights people always seem to forget that part.

We haven't forgotten we just have a better understanding of what it was intended to mean than yourself.

This article can help you gain some knowledge.

Dean, when I was in the Air Force I was part of a "Well Regulated Militia". When two of my brother-in-laws were in the Army they were too. Same with my little brother when he was in the Navy.

Randy  replied to  Randy   5 years ago

It's all one sentence. Why do people ignore that? It means that there should always be the right to a well regulated militia. Why is that so hard to understand? Just read it!

Hopefully he won't live on to breed.

There ought to be a sentence to prevent the stupid from breeding again...

If you wanted to really know what the 2nd amendment means Dean you could actually join the real military instead of supporting the KKK and the RW militia groups.

Than you wouldn't be a taker, but would have done something to actually support the U.S.

Randy  replied to  Kavika   5 years ago

A "Well regulated Militia" under the 2nd Amendment would be either an active duty military unit or, if they wanted to remain citizen soldiers, the National Guard. It does not mean any group of morons who gather together with guns, racism and beer and decide they are going to defend America. They do NOT qualify as a "Well regulated Militia" who should be allowed to bear arms under the 2nd Amendment.

I say their guns should be taken away.

The bill of rights are individual rights intended to protect us from the government. The people that just got done fighting their government to gain their freedom had no intention of stripping us of the power to overthrow the government as they had to do.

The nut cases in this are completely full of shit with their revised version of history...