Was this ancient person from China the offspring of modern humans and Neandertals?

community » Discussions » Category » Anthropology & Archeology » Discussion » Was this ancient person from China the offspring of modern humans and Neandertals?

When scientists found a 40,000 year-old skeleton in China in 2003, they thought they had discovered the offspring of a Neandertal and a modern human . But ancient DNA now reveals that the “Tianyuan Man” has only traces of Neandertal DNA and none detectable from another type of extinct human known as a Denisovan. Instead, he was a full-fledged member of our species, Homo sapiens, and a distant relative of people who today live in East Asia and South America. The work could help scientists retrace some of the earliest steps of human migration.

“The paper is very exciting because it is the first genome to fill a really big gap, both geographically and temporally, in East Asia,” says paleogeneticist Pontus Skoglund of Harvard Medical School in Boston, who was not involved in the work.

The first modern humans arose in Africa about 300,000 years ago. By 60,000 years ago, a subset swept out of Africa and mated with Neandertals, perhaps in the Middle East. After that, they spread around the world—DNA from ancient humans in Europe, western Asia, and the Americas has revealed the identity of those early migrants and whether they were related to people living today, especially in Europe. But the trail grows cold in eastern Asia, where warmer climates have made it hard to get ancient DNA from fossils.

The new genome sheds some light on those missing years. In the first genome-wide study of an ancient East Asian, researchers led by Qiaomei Fu, a paleogeneticist at the Chinese Academy of Sciences in Beijing, extracted DNA from the thighbone of the Tianyuan Man—so named because he was found in Tianyuan Cave, 56 kilometers southwest of Beijing.

The team calculated that the Tianyuan Man inherited about as much Neandertal DNA—4% to 5%—as ancient Europeans and Asians of similar age. That’s a bit higher than the 1.8% to 2.6% of Neandertal DNA in living Europeans and Asians. The Tianyuan Man did not have any detectable DNA from Denisovans , an elusive cousin of Neandertals known only from their DNA extracted from a few teeth and small bones from a Siberian cave and from traces of their DNA that can still be found in people in Melanesia—where they got it is a major mystery.

A big surprise is that the Tianyuan Man shares DNA with one ancient European—a 35,000-year-old modern human from Goyet Caves in Belgium. But he doesn’t share it with other ancient humans who lived at roughly the same time in Romania and Siberia—or with living Europeans. But the Tianyuan Man is most closely related to living people in east Asia—including in China, Japan, and the Koreas—and in Southeast Asia, including Papua New Guinea and Australia.

All of this suggests that the Tianyuan Man was not a direct ancestor, but rather a distant cousin , of a founding population in Asia that gave rise to present-day Asians, Fu’s team reports today in Current Biology. It also shows that these ancient “populations moved around a lot and intermixed,” says paleoanthropologist Erik Trinkaus of Washington University in St. Louis in Missouri, who is not a co-author.

And some left offspring whereas others did not. “I find it interesting that … some of the early modern colonizers of Eurasia were successful while others were not,” says co-author Svante Pääbo, a paleogeneticist at the Max Planck Institute for Evolutionary Anthropology in Leipzig, Germany.

The Tianyuan Man also was a distant relative of Native Americans living today in the Amazon of South America, such as the Karitiana and Surui peoples of Brazil and the Chane people of northern Argentina and southern Bolivia. They inherited about 9% to 15% of their DNA from an ancestral population in Asia that also gave rise to the Tianyuan Man. But he is not an ancestor to ancient or living Native Americans in North America, which suggests there were two different source populations in Asia for Native Americans.

This is welcome news to Skoglund, who found in a separate study in 2015 that the Karitiana and Surui peoples are closely related to indigenous Australians, New Guineans, and Andaman Islanders . At the time, he predicted that they came from the same “ghost” source population in Asia, which was separate from another Asian population that gave rise to Native Americans in North America. “It’s fascinating that a prediction of a ‘ghost population’ based on modern-day populations alone can be confirmed in this way,” he says.

Interesting that the find seems to indicate that there were two separate migrations/source populations to the Americas.

Other finds in both Central/South America and North America seem to support this as well.

This skeleton lived among the Woolly Mammoths as they died out 10,000 years ago. That is amazing.

There was an article a few months back that stated/proved that wooly mammoths we still living on islands off of Alaska as late as 5,000 years ago.

Every new discovery seems to turn the old theories on their head. With the advancement in DNA testing, drones and ground penetrating radar the new discoveries and extracting more information from old finds is surely changing the landscape of human migration.

Some caver buddies of mine found a skull fragment and other parts of a 27,000 year old scimitar cat as well as parts of a stag moose in a cave we've been working on in SE Minnesota.   Several cavers including me had stubbed our toes on the skull without realizing what it was.   So far no human bones but we did find a 400 year old moccasin in a cave here in WI.

Oh yeah, Tyson cave....Good stuff, are you from that area Skrekk?

The mocassin that you found, is it right or left foot? I lost one in that area.

I'm in rural SW Wisconsin but I cave all over the world.   SE Minnesota has a lot of great caves which are yet to be explored so I've spent a lot of time there caving and cave diving.    We've discovered dozens of significant in the past 20 years or so.

The moccasin I had encountered before but thought it was just an old leather glove.   One of my old cave buddies spotted it and immediately recognized what it was.   His brain works like that - he can spot a tiny bone in the grass and tell you exactly what part of what kind of mouse it came from.

I'm from north central MN, real far north, Warroad....I now live in SW Missouri and there are more caves to explore around here then you could cave in a decade.

I'm quite familiar with SE MN, and Wisconsin.

Would you please send my mocassin back to me...It's difficult walking with one mocassin.

Whenever we cave in your area (which has more caves than anywhere else in the country) we always imagine we'll find evidence of paleoamericans......but no such luck.

I presume you know about the Burrows cave hoax in southern Illinois?    Given the proximity to the Cahokia complex I wouldn't be too surprised if some of the "artifacts" which Burrows had been selling were actually the real thing.

I live around 5 hours from the Cahokia Mounds...Really amazing site.

Here is a link to caving in the Ozarks. You may be familiar with it, but some good information.

Do you ever find new ones and do you walk in or have to rope in ?

With a few exceptions there haven't been any significant cave discoveries in WI in the past 20 years or so, but I've been mapping one of the most significant recent discoveries in the state.   It's actually a rediscovery, first found in 1859, then again in 1926, then in 1987.   You do have to chimney in and out of that one, and it's the deepest and best decorated cave in the state.

In MN we've made dozens of new discoveries in the last 20 years.   Most of those caves are 30' to 120' beneath the surface so after excavating a sinkhole (or diving a sump to find new cave), we drill a new entrance and install a gated vertical culvert & ladder.   A number of those caves have significant vertical relief so apart from chimneying or free climbing some also need technical vertical gear or diving gear.

I want to come out to the Crater of Diamonds Park. Have you ever been ?

The one in Arkansas, no I haven't...If I remember correctly they discovered a large diamond there last year.

I forgot to mention that the citation to the Burrows hoax is of a website by a notorious neo-Nazi and former head of the US Nazi party, Frank Collin (AKA Frank Joseph).   I'm not sure how being a white supremacist fits into believing a hoax about pre-Columbian visits by Africans to the Americas.

There's been many over the years. I've been a rock hound all my life. Nerdy or not it's on my bucket list, lol. 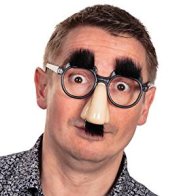 Mammoth was unhealthy meat; he had a heart attack from eating too much Wooly.

No is wasn't lenny, it's wasn't processed...