Baseball Trivia - What've You Got?

"Baseball is ninety percent mental, and the other half is physical." (Yogi Berra)

Baseball Trivia - What've You Got? 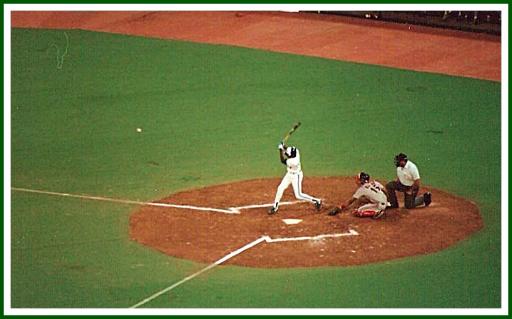 This is my only baseball photo, taken with my Canon F1 SLR at 2000th a second - fast enough to stop a hit ball in the air.  I had been invited to watch that game from the Blue Jays corporate box.  My seasons' tickets were about 15 rows up behind home plate.

The season starts this year on March 28, the earliest ever, so it's time to start thinking baseball.

Right after the Blue Jays won their back-to-back second World Series, they held a Fan Appreciation Day in Toronto's SkyDome.  The fans filled the place and they sure as hell were appreciative - I was there as well.  Joe Carter took the mike and said: "Last year we did it for Cito (Cito Gaston, the team manager) and this time we did it for Paul." (Paul Molitor, an eventual Hall of Famer whose great playing had never won him a Series ring, so he had joined the team that year, and he got his ring.) It was actually Paul Molitor who scored the winning run.  It was the bottom of the 9th, the Jays were one run behind the Phillies, someone was on second and Paul was on first when Joe hit the "Home Run of the Century".

Are there any REAL baseball fans here?  A REAL baseball fan has to at least once in his life make the pilgrimage to Cooperstown.  My neighbour and our sons, both around 10 years old at the time did it, toured the Hall of Fame, and my son the "catcher" got himself a baseball PURPORTEDLY signed by Yogi Berra, his hero.

DOES ANYONE HERE HAVE BASEBALL TRIVIA TO POST?  LET'S SEE IT.

DOES ANYONE HERE HAVE BASEBALL TRIVIA TO POST?  LET'S SEE IT.

I was always more of a player of the game (baseball first, then softball) than a fan of any team.  My dad was always the one who remembered stats, outstanding plays, and so forth, and he is a die-hard Yankees fan.

I have been to Cooperstown and toured the Baseball Hall of Fame.  We took a family road trip to Niagara Falls and upstate NY.

My grandfather my mom's dad was a New York city cop for about 30 years he moon lighted as a security guard at old Yankee stadium.My mom saw every game they played from the time she was 8 till she was 18 that was 41 to 51 except during the war you can't talk to her when they are playing.Mom taught me to play baseball she was a great stick ball player in her day.

Dad didn't want me to play, because there was no softball league for girls.  I convinced him in the end, played baseball for 3 years, then switched to softball when they finally formed a girls' league.  Dad eventually helped coach my high school softball team, and a lot of my high school teammates and girls who played softball with my sister still stay in touch with him on Facebook, and go on and on about how much he taught them about the game.

Pitcher with most losses, all time?

cy young would Be my guess

Hitter with the most inside the park homers...career.

Joe Carter's home run is way up there on my list. I'm pretty sure I won a buck off of that swing.

Two moments that are also at the top involve the same player. In 1995, Cal Ripkin Jr. breaks the record for consecutive games, and had a banner day at the plate as well. He continued to add to the streak through the fall of 1998, when he stepped aside, making for, what was to me, an extremely emotional event. Who took the field in his place at third? (Trivia was much better before the internet)