Teaching cows to use the toilet is not the easiest task, but a Dutch inventor is banking on a new bovine urinal to help cut emissions that cause environmental damage.

Tests have started on a farm in the Netherlands on the device which collects some of the 15 to 20 litres of urine that the average cow produces a day.

That produces huge amounts of ammonia in a country like the Netherlands, which is the world's second biggest agricultural exporter after the United States.

"We are tackling the problem at the source," Henk Hanskamp, the Dutch inventor and businessman behind the "Cow Toilet", told AFP Friday.

"A cow is never going to be completely clean but you can teach them to go to the toilet."

The way the toilet works is "udderly" ingenious.

The urinal is in a box placed behind the cow, while in front is a feeding trough. Once the animal finishes eating a robot arm stimulates a nerve near the udders, which then makes it want to urinate.

The cow toilets are currently being tested on a farm near the eastern Dutch town of Doetinchem and seven of its 58 cows have already learned how to use them without the need for stimulation.

"The cows have got used to it," Hanskamp said. "They recognise the box, lift their tail, and pee."

"The stables have become cleaner and the ground is drier. Less damp ground is better for the health of the cows' hooves," Jan Velema, a vet who took part in the tests, was quoted as saying by De Volkskrant newspaper.

The Netherlands is already introducing stricter rules on emissions of ammonia, which can cause atmospheric pollution and irritate the eyes in humans.

The chemical can also be implicated in the creation of environmentally damaging algae blooms when it mixes with water.

Hanskamp, whose company develops agricultural machinery, says it could "reduce by at least half the amount of ammonia produced" were the cow to urinate on open ground.

The company aims to have them on the market by 2020, he said.

Just wait till AOC gets her hands (no pun intended) on this!!

Maybe she can improve on it by installing a kids toy pinwheel by the ass to make the farts useful!!

If cows use toilets were will adventurous kids get their magic mushrooms?

Finally someone has decided to take the bull by the horns and steer things in the right direction. A sensible solution to agriculture's #1 problem. How do they come up with these ideas? Stream of continence.

That's a lot of pee

Just think, what if it was Russian cows that peed on Trump?

He would have drowned

I think if that was in the Dossier it would have been more believable. I mean look at what he can do to a big mac. 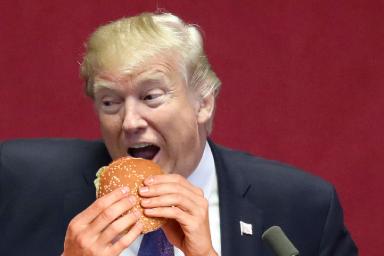 Usually he hands them out to sport teams.

Then the question, what to do with all the collected pee.

The new bottled water. Straight from a cow.

In the grim scenario where presently about 70% of pathogenic bacteria are resistant to at least one of the drugs for the treatment, cue is to be taken from traditional/indigenous medicine to tackle it urgently. The Indian traditional knowledge emanates from ayurveda, where Bos indicus is placed at a high pedestal for numerous uses of its various products. Urine is one of the products of a cow with many benefits and without toxicity. Various studies have found good antimicrobial activity of cow’s urine (CU) comparable with standard drugs such as ofloxacin, cefpodoxime, and gentamycin, against a vast number of pathogenic bacteria, more so against Gram-positive than negative bacteria. Interestingly antimicrobial activity has also been found against some resistant strains such as multidrug-resistant (MDR) Escherichia coli and Klebsiella pneumoniae . Antimicrobial action is enhanced still further by it being an immune-enhancer and bioenhancer of some antibiotic drugs. Antifungal activity was comparable to amphotericin B. CU also has anthelmintic and antineoplastic action. CU has, in addition, antioxidant properties, and it can prevent the damage to DNA caused by the environmental stress. In the management of infectious diseases, CU can be used alone or as an adjunctive to prevent the development of resistance and enhance the effect of standard antibiotics. https://www.ncbi.nlm.nih.gov/pmc/articles/PMC4566776/ ]

In fact, for a SHORT period of time, you can actually drink your own (as long as you can get passed the idea of it.).  But again, only for a very short time.   After a few days of that, it's possible that the stuff the kidneys are removing can become too concentrated and then can actually become poisonous to you.

You can always filter it in a brita filter pitcher and it's as fresh as mountain spring water but warm.

You can always filter it in a brita filter pitcher and it's as fresh as mountain spring water but warm.

Actually, that might work.  But there are filters that work quite well.    But it's getting beyond the mental block.

Charge people to stand under the cow urinal.

I've been peed on by a cow. I didn't even have to pay for it

make it into diesel exhaust fluid