The U.S. military has stopped tracking the amount of territory controlled or influenced by the Afghan government and militants, a U.S. watchdog said on Tuesday, one of the last remaining public metrics that tracked the worsening security situation in the war-torn country. 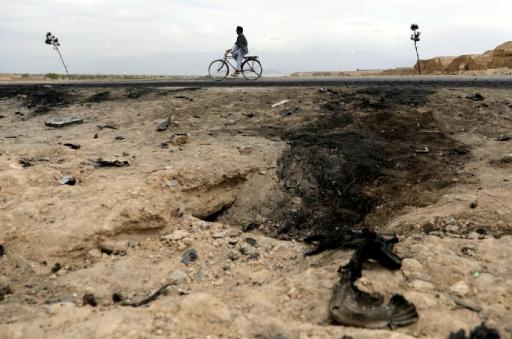 The move comes as U.S. and Taliban officials have held several rounds of talks aimed at ensuring a safe exit for U.S. forces in return for a Taliban guarantee that Afghanistan will not be used by militants to threaten the rest of the world.

An Afghan man rides on a bicycle past the site of a car bomb attack where U.S soldiers were killed near Bagram air base, Afghanistan April 9, 2019.
REUTERS/Mohammad Ismail/File Photo

The Taliban announced the start of a spring offensive in early April. Even before the announcement, combat had intensified across Afghanistan in recent weeks and hundreds of Afghan troops and civilians have been killed.

The Special Inspector General for Afghanistan Reconstruction (SIGAR) said in a report published late Tuesday night that the U.S. military had told the watchdog it was no longer tracking the level of control or influence the Afghan government and militants had over districts in the country.

The NATO-led Resolute Support (RS) mission in Afghanistan had told SIGAR that the assessments were “of limited decision-making value to the (RS) Commander.”

“This much is clear: There’s even less information for American taxpayers to gauge whether their investment in Afghanistan is a success, or something else,” John Sopko, the head of SIGAR, told Reuters.

A January report put districts under government control or influence at 53.8 per cent covering 63.5 percent of the population by October 2018, with the rest of the country controlled or contested by the Taliban.

Experts said that the move to stop tracking the key data was worrying because Washington had publicly set a benchmark which would now be difficult to measure.

In November 2017, the top U.S. general in Afghanistan at the time set a goal of driving back Taliban insurgents enough for the government to control at least 80 percent of the country within two years.

“If the military is not going to be tracking that data anymore, that is going to make it a lot more difficult to get a sense as to how strong the Taliban is,” Michael Kugelman, with the Woodrow Wilson Center, said.

“That may well be the military’s intention,” he said.

Over the past few years, the U.S. military has restricted data on the Afghan war being shared with the public, including the size of the security forces, casualty numbers and the attrition rate for the Afghan National Defense and Security Forces (ANDSF).

In 2018, the U.S. military said a “human error in labeling” caused it to treat as classified information the amount of territory controlled or influenced by the Taliban and the Afghan government.

The rest of the report painted a bleak picture of the security situation in Afghanistan.

Citing numbers from Resolute Support, SIGAR said the monthly average of enemy-initiated attacks increased by 19 percent from November 2018 through January 2019 compared to between August to October 2018.

ANDSF casualties increased by about 31 percent from December through February compared to the same three-month period last year.

but...but...didn't we elect the winningest president who said he could stop the war in the first months of his term?

The UN nations that were supposed to be supporting the rebuilding effort are gone. The Afghanistan government is weak and corrupt; is propped up by the US military; and their control doesn't extend much beyond the capital. Warlords and the Taliban control the rest.

What should have always been a search and destroy mission for Al Qaeda and the Taliban has turned into another failed venture of US nation building.

We will not win in Afghanistan. Withdraw the troops; and let drones/special forces take care of Al Qaeda and the Taliban where ever possible.

Bush should have never invaded Afghanistan, Obama should have followed through with his campaign promise as Trump should have too and ended this nightmare.

The United States funded and trained the very despots that are kicking our teeth in. It's shameful.

You're right. At first I thought invading Afghanistan was a good idea because that's where OBL was. Then it turned into a quagmire. We should have just tossed some daisy cutters at the mountains where OBL was hiding and called it a day

Over the past few years, the U.S. military has restricted data on the Afghan war being shared with the public, including the size of the security forces, casualty numbers and the attrition rate for the Afghan National Defense and Security Forces (ANDSF).

So basically, out of sight, out of mind. Sounds like the administration doesn't want anyone to hear anything about it.

After years of blood lost and fortune squandered.

We must have a Forever War somewhere!

When Blackwater's mercenaries are insufficient, we will absolutely have to send in the Marines.

I'm too young to remember much about Vietnam and you probably are, too, but did the gov't pull this garbage there, too?

Yeah I was young. I remember something about a president elect saying he was going to get out of Vietnam, then once elected, doubled down on troops or something.

If I remember correctly back then the press went over there and reported on it. Our press today seems to be mostly quiet on Afghanistan.

What is to know? It has been a doomed venture from the start.

My only problem with Trump is what the hell is taking him so long to get out? Obama promised to get US forces out; but we are now in the third presidency since it started; and we are still there.

There will be no winning in Afghanistan.

The Russians learned that lesson, seems we have not.