What we now know about G.O.P. economics.

Do you remember the great inflation scare of 2010-2011? The U.S. economy remained deeply depressed from the aftereffects of the burst housing bubble and the 2008 financial crisis. Unemployment was still above 9 percent; wage growth had slowed to a crawl, and measures of underlying inflation were well below the Federal Reserve’s targets. So the Fed was doing what it could to boost the economy — keeping short-term interest rates as low as possible, and buying long-term bonds in the hope of getting some extra traction.

But Republicans were up in arms, warning that the Fed’s policies would lead to runaway inflation. A Congressman named Mike Pence introduced a bill that would prohibit the Fed from even considering the state of the labor market in its actions. A who’s who of Republicans signed an open letter to Ben Bernanke demanding that he stop his monetary efforts, which they claimed would “risk currency debasement and inflation.”

And supposedly respectable Republicans engaged in conspiracy theorizing, suggesting that the Fed was secretly in league with the Obama administration. Paul Ryan and the economist John Taylor declared that the Fed’s policy “looks an awful lot like an attempt to bail out fiscal policy, and such attempts call the Fed’s independence into question.”

Of course, all these warnings were totally wrong. Inflation never took off. Although almost none of the people who waxed hysterical over inflation have so much as acknowledged having been wrong, Bernanke, Fed economists, and Keynesians in general were proved right: printing money isn’t inflationary in a depressed economy.

But what lay behind all these dire warnings about inflation? Well, they came at the same time that Republicans were warning about the terrible, horrible, no-good consequences of deficit spending.

And it was obvious even at the time that G.O.P. deficit posturing was hypocritical – obvious, that it, to everyone except the entire Beltway establishment. All you had to do was look at what was actually in Ryan’s budget proposals to realize that he wasn’t sincere, that he was using deficits as an excuse to bash social programs and hobble Obama. It was utterly predictable that Republicans would decide that deficits don’t matter as soon as they recaptured the White House.

But I thought that monetary policy was a bit different. Republicans have been the party of fiscal irresponsibility since Reagan, and there was no reason to believe that they had changed. But goldbuggery, hatred of fiat money, and abhorrence for the printing press did seem to be long-standing attitudes on the right. I imagined that Ryan, who once asserted that he had learned all he needed to know about monetary policy from Atlas Shrugged, might actually believe what he was saying about the Fed.

You see, Donald Trump’s attempt to install Stephen Moore at the Fed failed for the wrong reason. Moore fell short because he turns out to be a loathsome individual. But he should have been rejected out of hand simply on the basis of his economic views. Not only was he wrong, again and again, during the financial crisis and its aftermath; not only did he refuse to admit error, or learn anything from his mistakes; but he turned on a dime as soon as Trump was in office, showing himself to be a purely political animal. He demanded higher interest rates when unemployment was above 9 percent; now he’s demanding lower rates with unemployment below 4 percent.

But as I said, that’s not why Moore fell short — because his whole party has followed the same path. Mike Pence, who demanded higher rates in the deeply depressed economy of 2010, wants lower rates now. No Republicans in Congress seem to have criticized Moore for his policy views, as opposed to his misogyny. Aside from Harvard’s Greg Mankiw, not one prominent Republican economist stepped up to oppose Moore, even though he clearly was engaged precisely in the kind of politicization of monetary policy Taylor and Ryan claimed to see in 2010.

I made a little chart to summarize the evolution of Republican positioning on monetary policy. It shows the employment rate of prime-age adults, widely seen as a better indicator of the state of the labor market than the unemployment rate, and the rate at which wages are increasing. Both measures hit low points in 2010-2011, making a strong case for expansionary monetary policy. That’s precisely when the G.O.P. was pressuring the Fed to stop trying to help the economy. Both measures are at post-crisis highs now, and sure enough, Republicans are advocating now the policies they opposed when they were most needed. 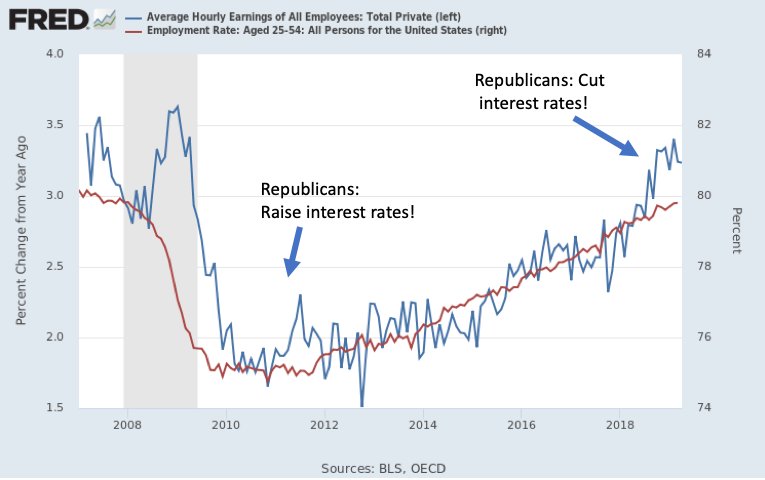 Funny how this works     Federal Reserve of St. Louis

As Matt O’Brien points out, you don’t see the same thing on the Democratic side: center-left economists who have argued for years that the Fed was being too conservative are still saying the same thing with Trump in office.

What all this tells us is that Republican positioning on economic policy has been in bad faith all these years. They didn’t really believe that a debt crisis and hyperinflation were looming. They were just against anything that might help the economy while a Democrat was president.

There are links in the OA.

No wonder the once Grand Old Party of Lincoln is now known merely as, "the gop"...

Now Krugman has joined the economic conspiracy crowd. Obama's economy was sabotaged? That is amazing.

Way to cover up how wrong you were Paul.....

Apparently Paul Krugman is not opposed to politics since he is attempting to mislead everyone with a political opinion.  The problem with Krugman's twisted logic is that Donald Trump isn't the TEA Party and doesn't appear to subscribe to the fantasy economics of Ayn Rand.  Trump is definitely not a Reagan Republican much to the chagrin of Reagan Democrats.  In case Dr. Krugman hasn't noticed, Trump has been using a sledge hammer on free trade and has been pointing out that our globalized friends haven't been that friendly.  And Trump's nationalist and protectionist policy agenda seems to be working.  The longer Trump is in office, the deader Reagan becomes.

Did Reagan Republicans (and Reagan Democrats) use fiscal and monetary policy for political purposes?  No doubt.  But it is also necessary to understand that the free trade, globalized, trickle down economic agenda embraced by Reagan Republicans and Reagan Democrats requires policy that is the exact opposite of nationalist, protectionist policy.  So, yes, Dr. Krugman today's policy demands are opposite those of the Obama years.