Trump, frustrated by advisers, is not convinced the time is right to attack Iran

community » Discussions » Category » News & Politics » Discussion » Trump, frustrated by advisers, is not convinced the time is right to attack Iran 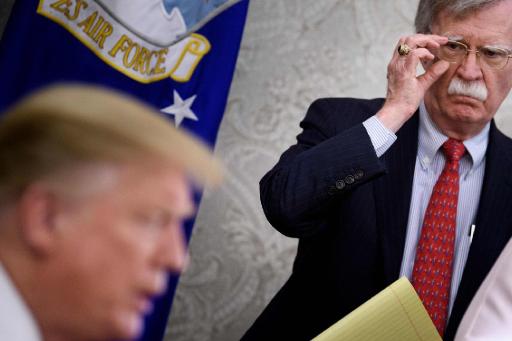 The Trump administration has been on high alert in response to what military and intelligence officials have deemed specific and credible threats from Iran against U.S. personnel in the Middle East.

But President Trump is frustrated with some of his top advisers, who he thinks could rush the United States into a military confrontation with Iran and shatter his long-standing pledge to withdraw from costly foreign wars, according to several U.S. officials.

Bolton, who advocated regime change in Iran before joining the White House last year, is “just in a different place” from Trump, although the president has been a fierce critic of Iran since long before he hired Bolton. Trump “wants to talk to the Iranians; he wants a deal” and is open to negotiation with the Iranian government, the official said.

He is not comfortable with all this ‘regime change’ talk,” which to his ears echoes the discussion of removing Iraqi President Saddam Hussein before the 2003 U.S. invasion, said the official, who, like others, spoke on the condition of anonymity to discuss private deliberations.

If anyone has forgotten-- here are some short clips of what some prominent politicians said in the build-up to the war on Iraq. All of them speaking of the dangers we faced from the WMDs that Saddam undoubtedly possessed.

Trump prefers a diplomatic approach to resolving tensions and wants to speak directly with Iran’s leaders.

Trump grew angry last week and over the weekend about what he sees as warlike planning that is getting ahead of his own thinking, said a senior administration official with knowledge of conversations Trump had regarding national security adviser John Bolton and Secretary of State Mike Pompeo.

I think Trump is in the right place on this. This is consistent for him. For years he has been critical of the ease with America sometimes goes to war. I'm glad he wants to hold out for a deal and I'm confident that if war is ultimately necessary he will prosecute it in such a way as to get it over with as soon as possible.

I agree he's in the right place here but but he has no significant history of foreign policy wisdom. He's barely treading water. There's half a dozen global dumpster fires going on right now and he has no clue what to do. If he relies on Pompeo and Bolton we're fucked.

Trump has started no new wars- which makes him far and away better that our past several presidents. Nor, outside of a minor uptick in Syria, has he escalated US involvement with any of the current wars.

My only problem with Trump is he has allowed the Hawks on both sides, and military advisers, to delay our departures from Syria, Iraq, and Afghanistan. We can thank Bush Jr and Obama for those messes.  Hopefully Trump will stay the course and get us out of those failed ventures.

John Bolton wants a damn war with Iran so badly it makes his rotten teeth hurt...