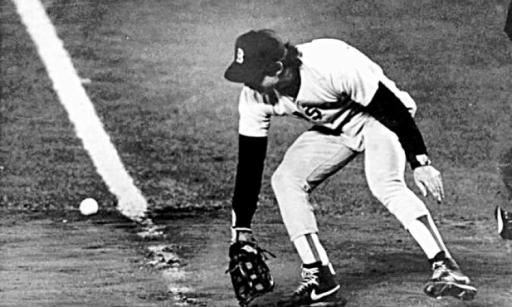 Bill Buckner, the longtime major leaguer whose error in the 1986 World Series for years lived in  Red Sox  infamy, died Monday. He was 69.

"After battling the disease of Lewy Body Dementia, Bill Buckner passed away early the morning of May 27th surrounded by his family," his family said in a statement. "Bill fought with courage and grit as he did all things in life. Our hearts are broken but we are at peace knowing he is in the arms of his Lord and Savior Jesus Christ."

Buckner played 22 seasons in the majors, was an All-Star once and won a batting title in 1980. But it was a ball that went through his legs at Shea Stadium on a cool Oct. 25 night in 1986 that made for one of baseball's most shocking moments.

Boston, looking for its first World Series title since 1918, carried a 5-3 lead into the bottom of the 10th inning of Game 6 against the  Mets . New York tied it with two runs, then brought Mookie Wilson to the plate.

Wilson worked a 3-2 count off reliever Bob Stanley, and then, with a runner on second base, bounced a slow roller up the first-base line on the 10th pitch of the at-bat. Buckner ranged to his left, went down to snag the ball behind the bag and watched it roll through his legs and into right field. Ray Knight scored to give the Mets a 6-5 can-you-believe-it win. They took Game 7, too, a gut punch to a Red Sox team a strike away from a long-awaited title just 48 hours earlier.

"We had developed a friendship that lasted well over 30 years. I felt badly for some of the things he went through. Bill was a great, great baseball player whose legacy should not be defined by one play," Wilson said Monday in a statement released by the Mets.

Red Sox principle owner John Henry said in a statement that his team is "proud that Bill Buckner wore a Red Sox jersey during the course of a terrific career that spanned more than two decades. His life was defined by perseverance, resilience and an insatiable will to win. Those are the traits for which he will be most remembered."

Team chairman Tom Werner added that Buckner "personified toughness and grit, and his determination to play through pain defines him far more than any single play ever could."

Buckner's teammates on the 1986 Red Sox said he wasn't to blame, noting Boston wouldn't even have been in the World Series without his efforts that season.

"No one played harder than Bill. No one prepared themselves as well as Bill Buckner did, and no one wanted to win as much as Bill Buckner," right fielder Dwight Evans later said.

But many in Red Sox Nation didn't see it that way.

"When that ball went through Bill Buckner's legs, hundreds of thousands of people did not just view that as an error, they viewed that as something he had done to them personally," longtime Boston Globe columnist Bob Ryan once said.

That single moment ended up defining Buckner's career, and even followed him after it.

When he retired in 1990, he and his family remained in Massachusetts. But the taunts and criticism from fans and media remained, forcing them to move to Idaho, where Buckner, an avid outdoorsman, bought a ranch.

When the Red Sox invited him to take part in a ceremony at Fenway Park honoring the 20-year anniversary of the 1986 team, Buckner declined.

But time heals most wounds, and though it took years, the relationship between Buckner and Boston fans eventually warmed.

The first step came in 2004, when the Red Sox finally ended the "Curse of the Bambino" by sweeping the Cardinals in the World Series. For fans, it was a chance to forget about the past and celebrate the present.

The next step came four years later in the Red Sox's 2008 home opener. That previous October, the team had won its second World Series title in four years, and on that April day, they were celebrating it with past and present Boston sports greats. One of them there: Bill Buckner.

From out under a massive American flag draped over the Green Monster, Buckner was introduced to the crowd and walked slowly to the mound amid a standing ovation that lasted nearly two minutes. With tears in his eyes, the left-hander delivered the ceremonial first pitch, a strike to former teammate Evans as the Fenway faithful roared.

"I really had to forgive, not the fans of Boston, per se, but I would have to say in my heart I had to forgive the media," Buckner said of why he decided to return to Fenway. "For what they put me and my family through. So, you know, I've done that and I'm over that."

Buckner, a baseball and football star growing up in Napa, California, was a second-round draft pick of the  Dodgers  in 1968, going one round after Los Angeles took Bobby Valentine. Buckner made his major league debut as a 19-year-old in 1969, beginning the first of what turned out to be eight seasons with the Dodgers.

Valentine tweeted that he will miss his former teammate.

As I clear my head and hold back the tears I know I will always remember Billy Buck as a great hitter and a better friend. He deserved better. Thank god for his family. I ll miss u Buck! — Bobby Valentine (@BobbyValentine)  May 27, 2019

The Dodgers tweeted "our thoughts and prayers are with the Buckner family."

Buckner was traded to the  Cubs  in 1977 and enjoyed some of his best seasons in Chicago. He won the NL batting title in 1980, hitting .324. A year later, he was named to his only All-Star team and finished 10th in NL MVP voting. The Cubs dealt Buckner to the Red Sox in May 1984.

"We are deeply saddened by the passing of Bill Buckner, a great ballplayer and beloved member of the Cubs family," Cubs executive chairman Tom Ricketts said in a statement, adding that "after his playing days, Bill served as a valued member of our player development staff and was a fan favorite during his appearances at our Cubs conventions."

In all, Buckner spent 22 seasons in the big leagues, playing first base or the outfield for five teams, including the Red Sox twice; they signed him as a free agent in 1990, but he struggled at the plate in his second stint there and was released before officially retiring. He finished his career with 2,715 hits, 1,208 RBIs, 1,077 runs scored and 174 home runs.

After his playing career, Buckner remained in baseball as a coach, including a stint as the White Sox hitting coach in 1996 and '97, and a return to Massachusetts in 2011 as manager of the independent league Brockton Rox.

He is survived by his wife, Jodi, and three children, Brittany, Christen and Bobby, who played baseball collegiately.

Buckner played for the Cubs for seven years, and had many great moments. You can't take someone who played major league baseball for 20 years and boil his worth down to one play, even if it did cost Boston a World Series.

Dear Friend John Russell: This was a pint made by Mookie Wilson, one of Buckner's contempaorary's.

I concur with both of you.

A multi year career isn't the same as one play.

20 years and never struck out three times in a game.  Many guys can’t go a week without doing that.

As a life-long Dodger fan, I always liked Buckner and his approach to the game.