Take a Moment to Admire These Passing Clouds on Mars

Life can be stressful and full of toil. To ease your tortured mind, we present to you some stunning photographs of clouds on Mars, recently taken by NASA’s Curiosity rover.

Curiosity is currently exploring the lower regions of Mount Sharp in Gale Crater, where it’s doing some important drilling and other fun science. From May 7 to May 17, the rover snapped some cool photos of clouds overhead using its black-and-white Navigation Cameras (NavCams). Curiosity tends to take photos of the ground, so these new images are a welcome reprieve.

A NASA press release described the clouds as being of the noctilucent variety—clouds that reflect sunlight even after dusk owing to their extreme height. These clouds are likely comprised of water-ice, according to NASA. Wafting some 31 kilometers (19 miles) above the Martian terrain, they bear an uncanny resemblance to clouds seen on Earth. It’s a goosebump-inducing sight—these are clouds as seen from the surface of another planet. Another. Freakin’. Planet.

Far from being an idle activity, however, Curiosity’s cloud-gazing behavior holds serious purpose. The rover is currently working in conjunction with its NASA colleague, the InSight lander, which is permanently parked some 600 kilometers (373 miles) away. Back in late April, InSight snapped its own photos of clouds  using its Instrument Context Camera (ICC). Snapping photos of “the same clouds from two vantage points can help scientists calculate their altitude,” explained NASA.

In July 2017, Curiosity used its NavCam to capture a series of images that were used to create  grainy videos showing the movement of Martian clouds (one example shown below). Unlike the noctilucent clouds recently imaged by the rover, these were cirrus clouds—thin and wispy clouds typically found at heights above 6,000 meters (20,000 feet).

In other Martian business, Curiosity has been working at a “clay-bearing unit” that’s living up to its name. While drilling into two rock targets, “Aberlady” and “Kilmarie,” the rover uncovered the “highest amounts of clay minerals ever found during the mission,” according to NASA.

Clay is hugely important from a scientific perspective because it requires the presence of water to form, and water is essential, as far as we know, for the emergence of life. Curiosity is thus continuing to fulfill an important part of its mandate: searching for signs of prior habitability on la Planète Rouge. All this clay suggests Gale Crater was once drenched in water, the exact nature of which is still a bit of a mystery. 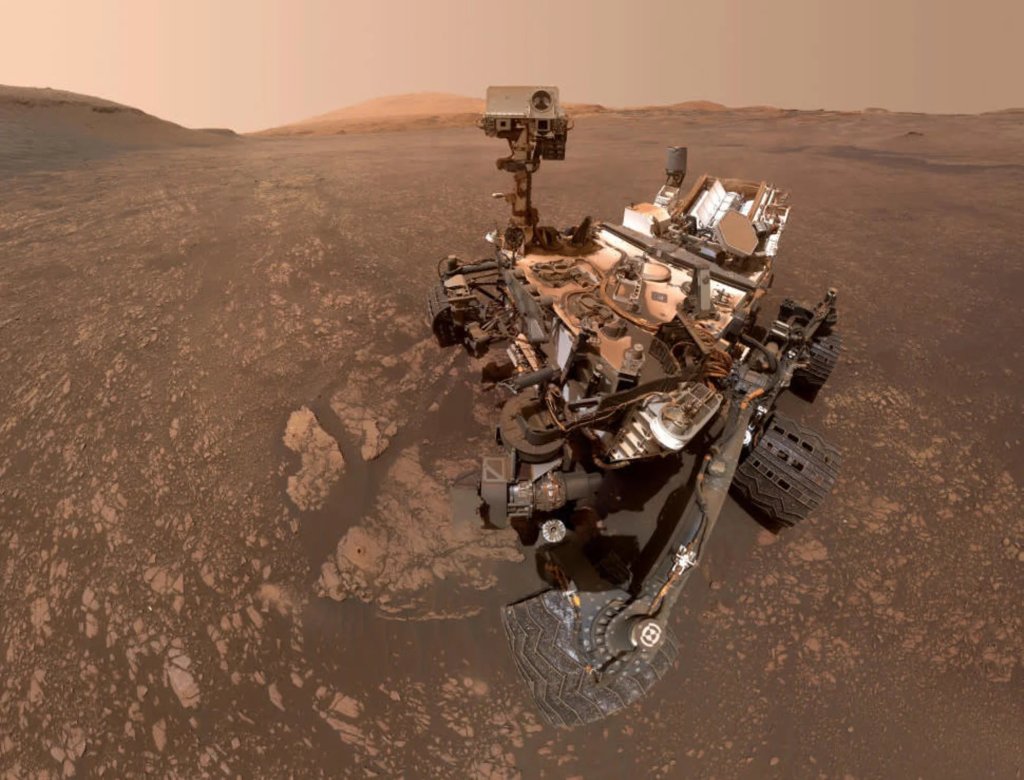 Speaking of mysteries, Curiosity’s mineralogy instrument, CheMin, only found scant traces of an iron oxide mineral called hematite in the samples. That’s a bit weird given its abundance to the north at Vera Rubin Ridge, Curiosity’s former stomping ground. Ah, but what would science be without the unexpected?

Upon completion of its drilling work, Curiosity struck a pose with the drill holes in clear view. The selfie was captured on May 12, 2019, and it was stitched together from 57 individual images.

Gotta say, the rover is lookin’ mighty good despite its years of service—though when I see a photo of Curiosity these days I’m struck with an overwhelming urge to brush off all the dust that’s accumulated on its deck. Hopefully a fortuitous Martian dust devil will eventually sweep by and do the honors, much like the one that recently visited the InSight lander.

Initial image: Martian clouds as seen by Curiosity on May 7, 2019.   NASA/JPL-Caltech

A NASA press release described the clouds as being of the noctilucent variety—clouds that reflect sunlight even after dusk owing to their extreme height. These clouds are likely comprised of water-ice, according to NASA. Wafting some 31 kilometers (19 miles) above the Martian terrain, they bear an uncanny resemblance to clouds seen on Earth. It’s a goosebump-inducing sight—these are clouds as seen from the surface of another planet.
Another. Freakin’. Planet.

I LOVE this stuff!

I think most of us can agree on this.

Human space travel progress is still painfully slow; but at least we are still exploring.  Hopefully the next step is an actual return payload from Mars of material to earth.

I think Mars will be colonized by robots long before we ever can even hope to set foot on it.

I say we should mess it up a bit before we try to colonize Mars.  The quickest way I can think of is to redirect asteroids into Mars to thicken the atmosphere and if its possible lengthen the day to say 36 to 48 hours to get more heat gain from the sun which should increase the heat retaining water in the atmosphere.

I LOVE this stuff!

As do I. Remember when the Cassini spacecraft sent images of Titan? Methane lakes and rain! How cool is that?

ESA had articles at all the main moments. Some amazing images...

I'll bet. But pretty much any image of space is amazing

I am not seeing a bunny shape in any of those clouds...count me out.

The bunny is on the Moon, not Mars.