Of privatization, cronyism and trade deals. 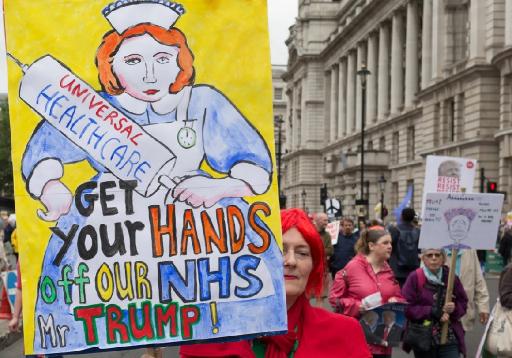 Probably everyone who followed Donald Trump’s visit to Britain has a favorite scene of diplomatic debacle. But the moment that probably did the most to poison relations with our oldest ally — and undermine whatever chance there was for the “phenomenal” trade deal Trump claimed to be offering — was Trump’s apparent suggestion that such a deal would involve opening up Britain’s National Health Service to U.S. private companies.

It says something about the qualities of our current president that the best argument anyone has made in his defense is that he didn’t know what he was talking about. He does, however, know what the N.H.S. is — he just doesn’t understand its role in British life.

After all, last year he tweeted that Britons were marching in the streets to protest a health system that was “ going broke and not working .” Actually, the demonstrations were in favor of the N.H.S., calling for more government funding.

But never mind what was going on in Trump’s mind. Let’s focus instead on the fact that no American politician, Trump least of all, has any business giving other countries advice on health care. For we have the worst-performing health care system in the advanced world — and Trump is doing all he can to degrade it further.

As it happens, the British and American health systems lie at opposite ends of a spectrum defined by the relative roles of the private and public sectors.

Although the Affordable Care Act expanded health coverage and increased the role of Medicaid, most Americans still get their insurance (if they get it at all) from private companies and get treated at for-profit hospitals and clinics. In other countries, like Canada, the government pays the bills, but health providers are private. Britain, however, has true socialized medicine: The government owns the hospitals and pays the doctors.

So how does that system work? Far better than is dreamed of in conservative philosophy.

First of all, medical bills simply aren’t an issue for British families. They don’t have to worry about being bankrupted by the cost of treatment, or having to forgo essential care because they can’t afford the deductibles .

You might think that providing this kind of universal coverage is prohibitively expensive. In reality, however, Britain spends less than half as much per person on health care as we do.

Is the health care any good? Judging from the results, yes. Britons have higher life expectancy than we do, much lower infant mortality , and much lower “ mortality amenable to health care .”

Does this mean that America should adopt a British-type system? Not necessarily.

There are, it turns out, multiple ways to provide universal health care: Canadian-style single-payer also works, as do systems of competing private providers, as in Switzerland, as long as the government does a good job of regulation and provides adequate subsidies for lower-income families.

But the N.H.S. works. It has its problems — what system doesn’t? — but there’s a reason the British love it.

Now, my experience in dealing with U.S. conservatives on health care issues is that they simply refuse to believe that other countries’ systems work better than our own. Their ideology says that the private sector is always better than government, and this trumps any and all evidence.

Indeed, it leads them to reject the government-run pieces of our own system that work fairly well. Which brings me to the reason Donald Trump is the last person who should be criticizing the N.H.S.

You see, America does have its own miniature version of the N.H.S.: the Department of Veterans Affairs’ Veterans Health Administration, which runs a network of hospitals and clinics. And like the N.H.S., the V.H.A. works pretty well.

Some of you are probably shaking your heads, because you’ve heard terrible things about the V.H.A. — tales of vast inefficiency and long waits for treatment. But there’s a reason you’ve heard these tales: They’ve been systematically spread by politicians and right-wing organizations that seize on problem cases as part of a drive to dismantle and privatize the system.

The reality, according to independent studies , is that on average, V.H.A. wait times are if anything shorter than those in the private sector, and V.H.A. hospitals provide better care .

But this good record may soon change. Historically policy at the V.H.A., like policy at the N.H.S., has been set largely by medical professionals. But last year reporting by ProPublica revealed that much of Veterans Affairs’ policy is now being set, not by duly appointed officials, but by a trio of Trump cronies whom insiders call the “Mar-a-Lago crowd.”

Leading the troika, by the way, is Ike Perlmutter, the chairman of Marvel Entertainment. And if you believe that Perlmutter’s influence will lead to lower costs and better care for our nation’s veterans, you probably also believe that Captain America is real.

Which brings us back to those N.H.S. remarks. Whatever the president thought he was saying, his host country had every reason to hear them as a hint that a trade deal would bring Trump-style privatization and cronyism to British health care. And that would indeed be “phenomenal.”

It says something about the qualities of our current president that the best argument anyone has made in his defense is that he didn’t know what he was talking about. He does, however, know what the N.H.S. is — he just doesn’t understand its role in British life.

After all, last year he tweeted that Britons were marching in the streets to protest a health system that was “ going broke and not working .” Actually, the demonstrations were in favor of the N.H.S., calling for more government funding.

Mr Trump is not satisfied with destroying Americans' health-care. He wants to destroy the Brits', too.

I made a bad economic call on election night 2016, predicting a Trump recession. But I quickly realized that political dismay had clouded my judgment, and retracted the call three days later .
- Paul Krugman

I've posted this before, but apparently "some" readers haven't noticed. I'll post it often, to be sure that a widely held mistaken idea eventually is corrected.

Next war, lose the US number. NATO should be able to go it a lone. Prove to the world that NATO is a force to be reckoned with sans the US. See how well those underfunded and under developed militaries really work. The US can sell NATO all of the weapons and training it needs. We will also immediately downsize our military by a quarter.  With the money we receive from NATO, and the money saved by downsizing our military, we promise to improve our health care system, Since with NATO around we won't need to be the world's policeman anymore.

The moron 'president' didn't even know what NHS was - Mrs. May had to tell him.