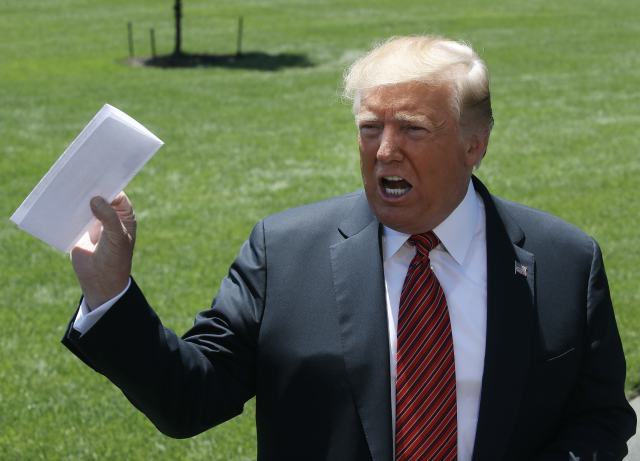 U.S. President Donald Trump holds a piece of paper he said was a trade agreement with Mexico, while speaking to the media before departing from the White House on June 11, 2019 in Washington, DC. President Trump is traveling to Iowa to attend a campaign rally. (Photo: Mark Wilson/Getty Images)

(Bloomberg) -- President Donald Trump told reporters that he reached a secret pact with Mexico that will take effect when he wants it to -- despite the country’s insistence that there are no secret components of an immigration deal struck last week.

“That’s the agreement that everybody says I don’t have,” Trump said at the White House Tuesday, holding one page of what he described as a lengthy deal. “I’m not going to say one way or the other, but I will tell you, right here is the story.”

Trump, speaking to reporters before leaving for a trip to Iowa, didn’t provide details of the nature of the agreement.

Trump on Friday said he was dropping plans for tariffs on Mexico that he’d been threatening to impose for the previous week after the country promised new steps to stem an influx of illegal migration into the U.S.

Under the deal, Mexico will expand deployment of its national guard throughout the country, “giving priority to its southern border,” according to a joint statement from the two countries. Asylum seekers who cross into the U.S. will be quickly returned to Mexico where they’ll wait for their claims to be resolved; the U.S. agreed to accelerate adjudication.

Trump over the weekend hinted at additional measures between the U.S. and Mexico, after he vowed that Mexico would soon make “large” agricultural purchases from the U.S. as part of the deal on border security and illegal immigration.

Three Mexican officials said Saturday they were not aware of any side accord in the works, and that agricultural trade hadn’t been discussed during three days of negotiations in Washington that culminated in a joint communique late Friday.

Mexico’s ambassador to the U.S. predicted on Sunday that trade in agricultural goods “could increase dramatically” now that tariffs aren’t going ahead and if the USMCA, the trilateral trade pact with the U.S., Mexico and Canada designed to replace NAFTA, is ratified -- but didn’t cite a specific deal with Washington on farm purchases.

Also on Tuesday, White House Acting Chief of Staff Mick Mulvaney also referred to a secret agreement with Mexico. Speaking at a conference in Washington, Mulvaney described the deal as a backstop.

Still, he said Mexico’s interests are aligned with those of the U.S. and that it’s “doing real things” and policing its borders.

--With assistance from Katia Dmitrieva.

To contact the reporter on this story: Justin Sink in Washington at jsink1@bloomberg.net

To contact the editors responsible for this story: Alex Wayne at awayne3@bloomberg.net, Justin Blum, Kevin Whitelaw

For more articles like this, please visit us at   bloomberg.com

You should check out Stephen Colbert's take on this also.

You can see on that piece of paper there is only one paragraph on it.

Ahhh, the secret "pinky swear" deal, right? I swear to god we have a teenage girl living in a man's body who spends endless hours on twitter trash talking, "pinky swear" dealing with despots and dictators, has a huge teenage issue with actual authority figures, and spends endless hours watching television. Golfing on the taxpayer dime is the same as a teenager spending mommy and daddy's money then standing in defiance if the taxpayer (mommy & daddy) demand an explanation.

It's a secret, I swear it's a secret that will be revealed some time, anytime or no time in the future...

It's a secret, I swear it's a secret that will be revealed some time, anytime or no time in the future...

It'll never be released because he is claiming executive privilege on that piece of paper. 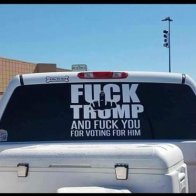 Every time Trump talks about a "secret deal" this is the first thing that pops into my mind, Trump makes this guy look sane.